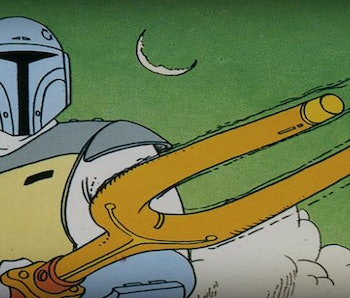 The most notorious bounty hunter in the galaxy, Boba Fett, was spotted for the first time exactly 38 years ago. During the one and only airing of the infamous Star Wars Holiday Special, Boba Fett made his first entrance while riding a giant space monster. And because this one event is convincingly enough like legit Star Wars, it really should be considered canon.

Justifiably derided by nearly everyone, the Star Wars Holiday Special has never been released on VHS or DVD, owing to the fact that George Lucas hated it. Despite featuring all the original members of the original cast, the primary live-action “plot” of the special was confusing and cheesy. Seeing Han try to get Chewbacca home to see his Wookiee family is full of all sorts of strange details, most of which should be forgotten.

However, there is one gem here: the nine-minute cartoon which features Boba Fett. Carrie Fisher, Mark Hamill, Anthony Daniels, and Harrison Ford provide their voices for Leia, Luke, C-3PO, and Han. Meanwhile, the mysterious Boba Fett is voiced by Don Francks, who went on to play the character in the 1985 Ewoks cartoon series.

Literally everything about this adventure is fantastic, and should 100% be canonized by the Lucas Story Group. Not only does the adventure contain (maybe?) the first appearance of the real Star Wars alphabet Aurebesh, but the characters and situations feel completely in-line with “real” Star Wars.

After the Millennium Falcon mysteriously crash-lands on a planet, Luke Skywalker heads out in a Y-wing to investigate. There, he is faced with Boba Fett, who initially pretends to be an ally! But, the audience knows better, because you can’t trust anyone who openly beats the space-slug they’re riding. True to his appearance in The Empire Strikes Back, Boba Fett is presented in this adventure as formidable, cold, and totally scary. You could go so far as to say that this Boba Fett is more badass than the one who eventually showed up in the films.

Of course, certain members of the Star Wars marketing team in the ‘70s and ‘80s initially conceived of Boba Fett as a much bigger deal. Former Lucasfilm employee Craig Miller revealed to Inverse back in May that the character was being considered for much more screen time than eventually happened. And everything about Boba’s appearance in this original cartoon supports that idea: Before blasting off in his jetpack, Boba Fett tells Luke “We’ll meet again!”