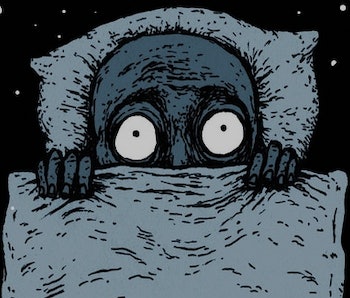 As we approach the end of the decade, we crane our necks toward the 2020s. We squint at the future to see that it’s everything between good and bad. There are inane Elon Musk tweets. There are cures. There is another Star Wars movie. There are wars. Facebook still exists. There are better treatments for mental health. And that’s what you’ll get in today’s edition of Inverse Daily. We have stories about the problems and solutions with hydroelectric power, global hunger, artificial intelligence, and more.

I’m Nick Lucchesi, executive editor at Inverse. Let’s dive into what the future looks like today.

“People who are bankers are not particularly dishonest.”

— Michel Maréchal, whose 2014 study on the honesty of bankers contrasts with a new one released this week.

How do you sleep at night?

Did you know that sleeping fewer than seven hours a night — a “magic number” that’s recommended by the National Sleep Foundation — could be linked to premature aging in the body?

Research released by scientists in Singapore found that when people slept for fewer than five hours per night, there were markers of premature aging in their bodies.

Specifically, their telomeres — chains of nucleotides at the ends of chromosomes — were shorter than those seen in people who slept at least seven hours. Telomere length is a sign of biological aging; the shorter they are, the “older” the body is, no matter how many years, hours, or days you’ve been on this planet.

A neat thing about this study is that they found this pattern using FitBit wearables. Basically, the scientists were encouraged by the fact that FitBits were extremely good at tracking sleep.

He’s got the bill

While some in the Western world can stop by CVS to pick up a bottle of 90 multivitamins, getting nutrients in the developing world isn’t that easy. Micronutrient deficiency is a huge yet hidden problem, as almost a third of the global population misses out on key vitamins and minerals every day. The results come in the form of impaired growth, cognitive disorders, blindness, and even death. A new invention may have solved a key stumbling block in the effort to deliver optimal nutrition.

Scientists have created a microparticle-based shield that can keep micronutrients protected until they reach the mouths of malnourished people across the globe.

Like a bullet train, the new microparticle platform can preserve the nutritional quality of foods like fortified bread and maize on their journey.

Developing the microparticle shield was a game of trial and error, spurred by the insight, funding, and encouragement of Bill and Melinda Gates and their foundation. (Bill even tried the fortified bread and couldn’t tell the difference from regular non-fortified bread, says Ana Jaklenec, senior author of the study.)

Tiny technology may be the key to delivering essential nutrients →

The brain-computer linkup firm is working to treat medical conditions using its implanted chip as early as next year, but during a podcast appearance, Musk reiterated his belief that the technology could avoid some of the worst consequences of advanced machines.

“It’s important that Neuralink solves this problem sooner rather than later, because the point at which we have digital superintelligence, that’s when we pass the singularity and things become just very uncertain,” Musk said during an interview with MIT professor Lex Fridman.

Can we offer you some Input? You’re a few clicks away from getting the best tech reporting on the internet – delivered directly to your inbox.

As ice continues to disappear apace, new research suggests there may be two beneficial opportunities.

Once-frozen glacier basins could provide humans with both a huge amount of energy — in the form of hydropower — and a reservoir for storing clean water. (The counterintuitive findings were published this week in the journal Nature.)

But before you get too excited at the idea of there being a small positive among the devastating effects of climate change, a separate study suggests that hydropower — commonly considered to be as green as other renewable energy sources, like wind and solar — emits more greenhouse gases than we thought.

Read more about the good and bad of hydropower →

If we don’t adopt legislation to stop killer robots from proliferating soon, they could become commonplace. That’s the message of a new report from the peace advocacy nonprofit PAX.

The report claims weapons manufacturers and countries are moving toward producing autonomous weapons systems. These systems, the report warns, could cascade into immoral and unethical use.

They’re coming sooner than you think →

Thank you for reading today’s Inverse Daily. The future is going to be amazing and terrible, but remember, you can always do you part to make it as great as you can.

If you have a suggestion for how to make this newsletter better drop me a line at nick@inverse.com! (Just know I am not going to quit with the schlocky bromides.) And follow me on Twitter where I retweet the best of Inverse every day.

More like this
Science
5.19.2022 11:00 AM
NASA InSight shutting down and more: Understand the world through 9 images
By Robin Bea
Science
5.18.2022 8:00 PM
Pollution is responsible for one in six deaths each year — and it’s getting worse
By Tara Yarlagadda
Science
5.17.2022 2:00 PM
Is smoked food healthy? A nutritionist explains the potential risks
By Claire Cameron
Related Tags
Share: