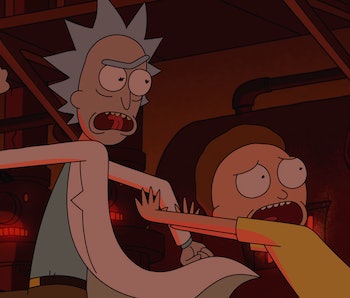 Everybody recognizes Rick and Morty as a wacky animated series that satirizes all sorts of science fiction tropes. But just as often, it pokes fun at specific horror stories. What does feel truly rare is when the series manages to actually frighten the viewer with high-stakes drama and terrifying threats.

Rick and Morty once introduced the Devil as a shopkeeper selling cursed objects in an episode that explored capitalism more in greater depth than evil. You could say the same for the Tiny Rick episode and its inclusion of vampires. Though we’ve all watched the mighty Cthulhu chase Morty and Rick in the opening credits countless times by now, the series hasn’t really explored Lovecraftian horror in compelling ways just yet.

This is a recreation of a segment from Inverse’s Multiverse newsletter distributed October 24. Subscribe for free to get weekly streaming recommendations.

When Rick takes Morty inside the dreams of his math teacher in the hopes of using inception to get Morty better grades, the two find themselves in increasingly more terrifying scenarios as they descend deeper into a series of nightmares. Eventually, they even meet a Freddy Krueger knock-off called Scary Terry who chases them for hours shouting the word “bitch!” over and over.

Like most Rick and Morty stories that dabble in horror, the whole thing winds up feeling like a satirical farce — but that just makes it more fun. The rest of this episode involves the family dog gaining sentience and starting a smart-dog rebellion, another story with terrifying implications that make this a uniquely frightful watch.

Morty has Rick concoct a love potion so his crush will finally notice him, but disaster strikes when the flu virus causes it to mutate, transforming the entire planet into horrifying monsters with no viable cure. Of every Rick and Morty episode, this one has some of the scariest moments, especially early in the stages of the virus when regular humans chase after Morty with pupils dilated, like wild zombies who want only one thing: to mate with Morty for life.

Rick and Morty episodes usually see everything return to normal by the end, but “Rick Potion #9” goes in the opposite direction, forcing the duo to migrate into an alternate reality where they bury their own dead bodies and replace their entire existence. The show was never the same.

A deliberate and subversive riff on The Purge cinematic franchise, “Look Who’s Purging Now” has Morty and Rick visit a world of anthropomorphic cat aliens on the night of their annual murder festival. One of the most violent episodes ever, it does not disappoint in terms of action or laughs.

There’s some fun Iron Man-style action, a blistering indictment of the Hunger Games’ dumb ending, and a deep examination of Morty’s inner rage in a story that amounts to so much more than just “the Purge episode.”

After a particularly harrowing adventure, Rick and Morty get a spa treatment that is supposed to remove their psychological toxins. Instead, they are separated into a purified pair and toxic pair that have to battle for the fate of the world. Perhaps scariest of all is how creepy non-toxic Morty’s behavior gets. (Seriously, he acts like a serial killer in the making.)

“Rest and Ricklaxation” is the epitome of psychological horror manifesting in terrifying sci-fi ways that only Rick and Morty can pull off. As series co-creator Dan Harmon explains in an “Inside the Episode” video from Adult Swim, this story deconstructs the psychological concept that “there’s bad parts of us we have to get rid of, and then we’ll be happy, we’ll be healthy.” This feels like a delusion that many of us have when we analyze ourselves and our problems, that there’s something broken about our personalities that causes our suffering.