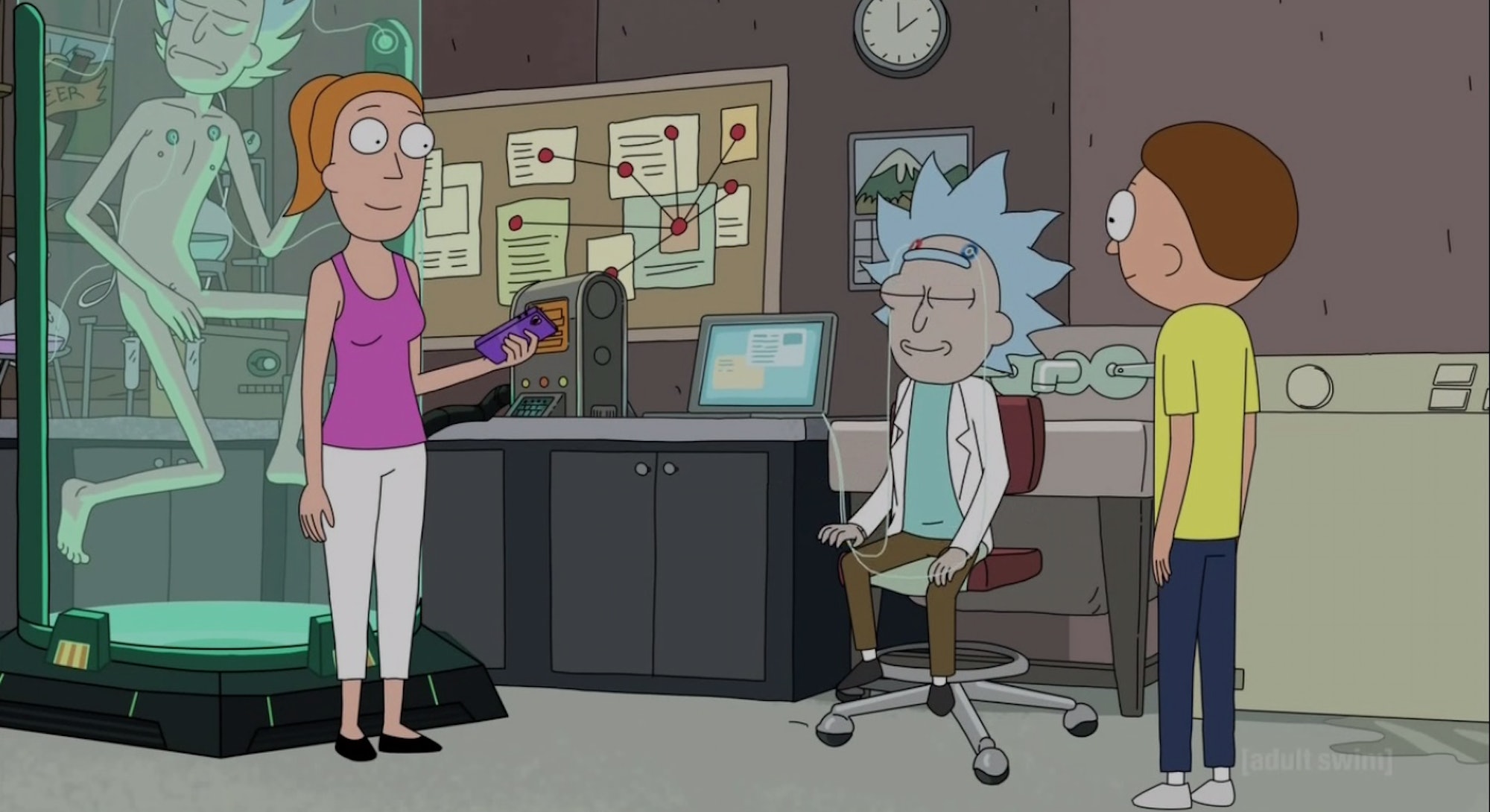 Rick Sanchez is a belligerent, alcoholic nihilist who’s proclaimed himself a god on at least one occasion. There’s even an episode of Rick and Morty where he screams “I’m Doctor Who in this motherfucker!” right at the President of the United States.

Through his Season 1 arc, Rick and Morty revealed that Rick had been dealing with great emotional pain, but it isn’t until several episodes after his attempted suicide in Season 2’s “Auto-Erotic Assimilation” that we get a dramatic look at the root of his inner torment as part of “Big Trouble in Little Sanchez” — more commonly remembered as the Tiny Rick episode.

After three fairly procedural adventures in the middle of Season 2, “Big Trouble in Little Sanchez” uses a vampire at Morty and Summer’s high school as an excuse to take Rick very far outside his comfort zone and into the body of his younger self.

In this, we ultimately learn that teen angst exposes the worst version of not just Rick, but Summer and Morty as well. Even more importantly, we’re presented with the idea that we have to embrace, not reject, the darker parts of our personalities if we want to remain whole.

In “Big Trouble in Little Sanchez,” Rick transfers his consciousness into a teenaged Rick clone which he dubs “Tiny Rick,” all so he can help them murder Coach Feratu (a vampire) offscreen. Most of the episode is then spent with Tiny Rick becoming insanely popular at school. His grandkids capitalize on all the positive attention, using it to entice their respective crushes even if it means neglecting their grandfather.

Because almost immediately, Tiny Rick broadcasts blatant signals that all is not well. He sings about his “real body” dying and draws pictures that show him literally crying for help. Summer is the first to see the signs, but Morty is willing to ignore them all for the sake of wooing Jessica.

On the outside, Tiny Rick is cheerful and charismatic, but as Summer correctly diagnoses, that’s only because he’s ignoring the darker truths of existence.

Grandpa, I think that, when you put your mind into this body’s young brain, it did what young brains do — it shoved the bad thoughts into the back and put a wall around them. But those bad thoughts are the real Rick. The fact that you’re old, the fact that we’re all going to die, one day, the fact that the universe is so big, nothing in it matters, those facts are who you are. So you’re trapped in there and you can only come out in the form of tiny Rick’s teen angst!

With his consciousness in a younger body, Rick’s original personality begins deteriorating as he ignores the misery of his older self, or more specifically the deeper, darker realizations he’s made about the nature of existence. Teenagers tend to bottle up all their angst, but the more mature response is to embrace it. Rick does have to self-medicate with drugs and alcohol to tolerate the meaninglessness of existence, but that full version of adult Rick still represents his best self.

The hard lessons we learn in life come with experience. Rejecting them presents a certain kind of immaturity. It becomes necessary, then, once Rick assumes his original body, to destroy what he calls “Operation Phoenix” — essentially a means for him to achieve immortality by continuously transferring his consciousness into clones of himself.

It’s also interesting to analyze “Big Trouble in Little Sanchez” alongside Season 3’s “Rest and Ricklaxation” and how they grapple with this idea of embracing all of one’s self.

Rick and Morty often investigates psychological issues under a surface of crude jokes and wacky sci-fi hijinks. Only in “Pickle Rick” is psychology and therapy directly addressed, but together, “Big Trouble in Little Sanchez” and “Rest and Ricklaxation” communicate this idea that from a psychological standpoint, one of the most dangerous things we can do is to reject aspects of our personalities.

In “Rest and Ricklaxation,” a machine literally removes the toxic aspects of Morty and Rick’s personalities, creating toxic doppelgängers that exist in some extra-dimensional space. But when Toxic Rick creates a kind of horrifying alchemy and uses it to escape, the ensuing chaos nearly destroys the universe. The supposedly non-toxic versions of each character also come across as far more unsettling. Morty becomes eerily like his Evil Morty counterpart in a Wolf of Wall Street scenario and Rick becomes somebody dangerously close to Doofus Rick.

Similarly, Tiny Rick essentially buries an aspect of his true self behind a wall of teen angst. In both cases, it’s only when uniting all aspects of the self that Rick can realize his true self.

These ideas also tangentially creep over into the B-plot, where Beth and Jerry go to couple’s therapy on an alien planet where a machine creates Mythologs, physical manifestations of how each person perceives their significant other. Jerry perceives Beth as a monstrous, spidery creature that resembles the Xenomorph queen whereas Beth perceives Jerry as a meek, submissive slug.

The half-baked idea here seems to be that couples can visualize the worst version of themselves while simultaneously recognizing their own toxic perspectives. This nightmarish, vaguely Jungian form of therapy has the two Mythologs confront one another, usually to the death.

But Beth and Jerry’s Mytholos develop an effective codependent relationship allowing them to destroy the entire facility. The only way to stop Mytholog Beth from taking over the universe with an army of Mytholog Jerrys is to artificially inflate how Beth perceives Jerry and create a new Mytholog. The concept gets a little convoluted after they use the machine to make a new Goddess Beth that simply destroys the first “imperfect” Beth.

Yes, Rick and Morty created what might be the most powerful being in the universe just to make a joke about the toxic nature about Beth and Jerry’s relationship. The idea at play here still leads to this idea that radical acceptance is the most important path towards psychological health, even when it seems dangerous.