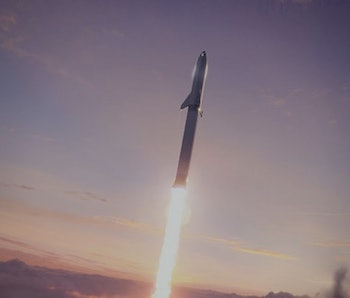 Ever considered nuclear rockets? Musk called on NASA to research the technology as a means of getting to Mars faster than before. The rockets, which could cut a flight to Mars down to just 100 days, offer around twice the efficiency of comparable chemical engines. Russian space agency Roscosmos has also been exploring this idea. Read more.

SpaceX successfully completed its CRS-18 resupply mission to the International Space Station on Thursday. The Dragon capsule took off from Florida’s Cape Canaveral Air Force Station at 6:24 p.m. Eastern time from Space Launch Complex 40 on top of a Falcon 9 rocket. The 5,100 pounds of cargo featured Nickelodeon slime, an Adidas soccer ball, and Goodyear tire materials. The capsule also featured four small panels designed to test the Starship’s heat shield prior to its planned mission to Mars and beyond. Read more.

Watch the Falcon 9 breach the sound barrier during re-entry:

What’s next for SpaceX: Musk is expected to deliver an update on Starship, the Mars-bound stainless steel rocket, in around two weeks’ time. The presentation comes after the miniature “Starhopper” completed its first hop test last week. Musk also plans a 200-meter hop in a similar timeframe.

A public hyperloop track could launch in just five to eight years’ time, according to a company official with ties to the industry. Thierry Marin-Martinod, a chief technology officer at TE Connectivity, which sponsored the rLoop hyperloop team, told Inverse last week that the project will likely focus on desert and other flat planes. “I strongly believe we will see some hyperloop project,” he said, adding that it would form a multi-pronged transport solution alongside electric planes and cars. Read more.

Musk’s tunnel-digging venture, which got its start by building a test tunnel on the SpaceX campus, has attracted investors. The firm has raised $120 million from outside investors, which the company claims places its overall value at around $920 million. Future Ventures investor Steve Jurvetson described it as “a great example of the disruptive playbook we look for.” The funding comes amid questions around the tunnel’s value. Read more.

The Falcon 9 as it pierces the sound barrier.

This has been Musk Reads: SpaceX Edition #91, the weekly rundown of essential reading about futurist and entrepreneur Elon Musk. I’m Mike Brown, an innovation journalist for Inverse.