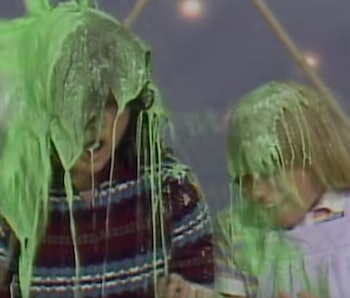 Ready to see some astronauts slime each other? Thanks to SpaceX, Nickelodeon, and the International Space Station, that could soon become a reality.

The green goo — infamous for its role on the ‘80s series You Can’t Do That on Television and for making an entire generation too shook to say “I don’t know” — is set to embark on a trip on July 21 to the ISS. It’s part of a broader resupply mission containing a number of other, non-slime-related goods. When it arrives, astronauts will use it to spray each other, make balloons, blow bubbles, and hit it with hydrophobic paddles. It’ll be out of this world!

Nickelodeon claims in a statement to CNet that it will be the first time that someone has been slimed in space — that we know about.

While this achievement will break ground for sending weird green liquids into space, the project’s principal investigator is hopeful it could serve another purpose:

“This project aims to develop educational videos and other digital content on slime experiments in space,” Mark Weislogel, the principal investigator and a professor that specializes in microgravity fluids at Portland State University, said in a statement. “The content is meant to spark an interest in microgravity research and help students learn about STEM topics such as fluid flow and materials engineering.”

The slime, along with the rest of the cargo, is scheduled to launch in a SpaceX Dragon capsule July 21 and will lift off using a Falcon 9 rocket from the Cape Canaveral Air Force Station, as part of the CRS-18 resupply mission.

Oh Right, Nickelodeon Slime Is a Thing That Exists

It’s unclear what exactly slime is made of, but some clues have emerged over the years. When it first debuted on 1979’s You Can’t Do That On Television, the slime was made of oatmeal, green food color, apple sauce and vanilla pudding. More recent iterations are a secret, but the network claims it’s made with all-natural ingredients and it’s safe to eat.

Slime, which has fascinated kids and soaked celebrities, has some rare physical properties. Weislogel explained in the statement that it’s a “non-Newtonian fluid,” which means its resistance to flow changes as stress is applied.

Custard and honey are other examples of these kinds of liquids. Brainiac, a British science show that was presented by Top Gear’s Richard Hammond, previously filled a pool with custard to demonstrate how its non-Newtonian properties enable a co-presenter to walk across:

The ISS crew will produce a series of videos showing how this unique fluid reacts in experiments, compared with their reaction on Earth. The videos are aimed to cover the same sort of topics encountered in elementary and middle school.

The mission will also cover some other experiments:

Hopefully the slime doesn’t cover those other experiments.