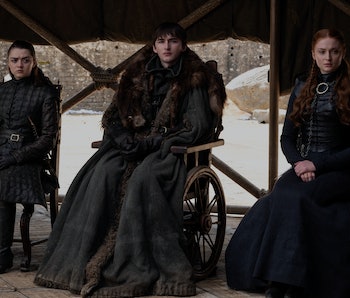 The war for the Iron Throne on Game of Thrones is finally over now that the series finale aired Sunday night, and it’s full of plenty grim surprises and some radical changes for Westeros. Perhaps the most surprising twist of all involves some revolutionary new Westerosi politics. Here’s what the ending of Game of Thrones means for the future of the Seven Kingdoms.

Big spoilers follow for the Game of Thrones series finale.

While the Unsullied massacre Lannister troops in the streets at the start of the episode, Jon Snow and Tyrion Lannister are appalled by all the destruction wrought by Daenerys Targaryen. She used Drogon to destroy huge portions of the city and kill thousands of innocent people. Tyrion quits being Hand of the King just in time for Dany to imprison him for treason, and before long, Tyrion and Jon come to the conclusion that the only way to stop Dany from becoming a new kind of tyrant is to kill her before she can take over the world.

But if Dany isn’t queen, then who rules Westeros? Here’s how Westeros entered a weird new era of politics in the finale.

Jon confronts Dany in the throne room, and they discuss the morality of free will and justice. She wants to build a “good” world by destroying anyone she thinks is evil, but Jon argues in favor of moral relativism instead, to which her counter-argument is to just kiss him on the mouth. Dany wants him to rule beside her, and for a second it looks like that’s exactly what’s about to happen. Except mid-kiss, Jon stabs his aunt with a dagger, killing her.

In this way, the Game of Thrones finale offered up perhaps the single least satisfying way to fulfill the Azor Ahai prophecy, the one that foretells of the Prince That Was Promised, who has to stab their beloved in the heart to defeat a force of great evil. Instead of forging a magical sword called Lightbringer, the act itself destroyed evil? Maybe? The far more likely conclusion is that the Azor Ahai prophecy never mattered to begin with.

What Happened to Drogon and the Iron Throne?

Right after Dany dies, Drogon (who had been napping right outside) flew around and tried to nudge her awake like some kind of sad dog. Once he realized that Dany was dead, rather than attack Jon, Drogon breathed fire around the nearby area, most notably to burn the Iron Throne, reducing it to a puddle of molten metal. Then he flies off with Dany’s body.

Despite making zero sense whatsoever, this symbolic gesture echoes Dany’s “break the wheel” ethos of wanting to destroy the old ways to create something new. But it’s also a reflection of how the Iron Throne was created: Aegon the Conqueror used the fire from his dragon, Balerion the Black Dread, to melt down all those swords so the throne could be forged. Fans have long compared Balerion to Drogon, mainly because of their size and seemingly identical colorings.

The gesture also pays homage to Tolkien’s Lord of the Rings, a story that climaxes when a magical ring is destroyed by melting it in the fiery volcano where it was made. “Only there can it be un-made,” Gandalf says of taking the Ring to Mount Doom. In similar fashion, only a dragon can destroy the Iron Throne.

The titular game of thrones was about destroying the throne all along. Who knew?

Who’s in the Grand Council of Westeros?

Right after the final instance of regicide on Game of Thrones, we get a jarring time jump forward of several weeks, or perhaps even months. Grey Worm leads Tyrion to a meeting at the Dragonpit. The group is ostensibly a political council assembled from the most powerful people in Westeros — with some odd exceptions.

Edmure Tully, Catelyn Stark’s bumbling kid brother, also joins in as yet another familiar face a lot of viewers might not remember. (Sad reminder: He married a Frey daughter at the Red Wedding.) There’s 17 people in total, with a few of them being random faces that don’t really matter. Each representative comes from a great house of Westeros, and this political meeting establishes a new political precedent for how new kings and queens will be selected.

The bizarre leaks about Bran Stark becoming the new king were true. At the council meeting in the Dragonpit, Tyrion nominates Bran Stark as the best candidate for the new king. Bran accepts and appoints Tyrion as his Hand, but this also establishes a new means of succession in Westeros that will function similar to how the Catholic Church elects a new pope.

Whenever a pope dies, the College of Cardinals (an assembly of the most senior cardinals and other leaders) meets to select a new leader. As a congressional body, they elect whomever they collectively see fit. Whenever each king or queen of Westeros dies, rather than have their heirs assume the throne — which has caused a lot of problems both in Game of Thrones and historically— the grand council will reconvene at the Dragonpit to select a new leader.

The North Remains Independent With Sansa as Queen

Mere seconds before Bran is seemingly made the official new king of Westeros, Sansa slides in to offer her brother support while also formally declaring that the North become an independent nation. The North has been unofficially independent for most of the series, but for the new king to formally acknowledge this makes it official. Sansa Stark is more of a legitimate Queen in the North than either of her brothers ever were.

For this reason, Bran Stark is labeled as “King of the Six Kingdoms” rather than the “Seven Kingdoms” we’ve heard for the past eight seasons. With Arya sailing off to explore the uncharted lands west of Westeros, it looks like the Starks have all the power they could possibly want. Except for Jon Snow.

Jon Snow Is Permanently Exiled to the Night’s Watch

The most bittersweet of all endings comes for Jon Snow, who is imprisoned for months after killing Daenerys only to be freed to face exile yet again as a new member of the Night’s Watch. Once he retakes the oath, he’ll formally forsake any and all claims he may have had as Aegon Targaryen. One huge plus for this turn of events for Jon: He was reunited with his pet direwolf, Ghost.

Jon also technically can’t claim any lands or sire any children, but the final shot of the entire series sees him riding North of the Wall with Tormund and the rest of the Wildlings, so who knows what he might find there?

Game of Thrones may finally be over, but there’s at least one prequel series currently in production.

More like this
Entertainment
20 hours ago
Knock at the Cabin's Ending is Shyamalan's Most Surprising Twist Yet
By Eric Francisco
Entertainment
Jan. 30, 2023
New House of the Dragon “making-of” book plunges into the fantasy hit’s creation
By Jeff Spry
Entertainment
Jan. 23, 2023
The Last of Us Episode 2 ending explained: is [SPOILERS] really dead?
By Dais Johnston
LEARN SOMETHING NEW EVERY DAY.
Related Tags
Share: