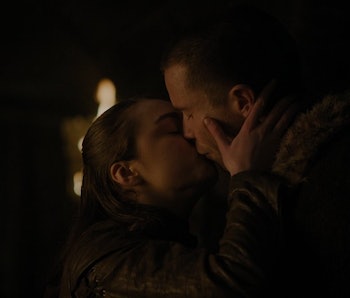 The union of House Stark and Baratheon was always meant to happen in Game of Thrones, but it took 69 episodes for the series to finally get there. When Arya Stark and Gendry had sex in Season 8’s second episode they weren’t just letting off steam before the big battle, they were fulfilling an oath once made by King Robert Baratheon in the crypts beneath Winterfell. If this blossoms into a legitimate marriage, it could become one of the most important in Westeros.

“We were meant to rule together,” King Robert Baratheon tells Ned Stark in the first Game of Thrones episode ever. “If your sister had lived, we’d have been bound by blood. It’s not too late. I have a son. You have a daughter. We’ll join our Houses.” At the time, Robert was obviously referring to Joffrey Baratheon and Sansa Stark’s would-be romance that never came to fruition. But for what it’s worth, Joffrey was never even a Baratheon anyway, having been the product of Cersei and Jaime Lannister’s incestuous relationship.

In fact, plenty of people over the years have theorized that Gendry is secretly the “black-haired beauty” that Cersei says she gave birth to, her only child with Robert that died.

Maisie Williams told Entertainment Weekly ahead of the Season 8 premiere that rewatching Season 1 was really important, and that feels very telling in hindsight.

“After reading the scripts I went back and watched Season 1 again because so much of it refers back to that season,” she said. “There are so many scenes that will look similar. And also I watched just to remind myself of the arc I’ve taken already. I wanted Arya to go full circle and try for some kind of normalcy like when she was younger.”

Part of finding some kind of normalcy for Arya involves opening up and being more vulnerable, assuming agency by spending what she assumes might be her last night alive in bed with Gendry. Before their sex scene, they discuss Gendry’s lineage, and even if their coming together isn’t explicitly recognized as the union of House Stark and Baratheon, the writing is still on the walls of Winterfell.

This is one of the big Season 1 callbacks we’re supposed to pay attention to.

Why was Robert so hellbent on that union? Robert needed Ned’s help to rule Westeros in Season 1, but he also looked upon Ned like a brother, moreso because Robert almost married Lyanna Stark. Ned and Robert fought together in Robert’s Rebellion to free her and defeat the Mad King, but their fraternity goes back much further.

Nobles of Westeros engage in something similar to the medieval European practice of fostering, through which young nobles would be fostered by other noble families for a time when they’re children. In their youth, both Ned and Robert were fostered by Jon Arryn in the Vale at the same time, so they grew up together and looked to Arryn as a father figure. That’s why Jon Arryn was Robert’s original Hand, and why Ned was so distraught to hear of his death when Game of Thrones began.

After all these years, the union of their houses remains an unfulfilled dream of Robert Baratheon, who was far more a romantic than his whoremongering let on. If they survive the Great Battle of Winterfell, Arya and Gendry could change that.

Even if the more wild theories about Gendry being a true Baratheon turn out false, we already know full well that legitimizing bastards is super-easy by royal decree. It happened to Ramsay Snow and almost happened to Jon Snow. As long as whoever winds up ruling Westeros four episodes from now isn’t Cersei Lannister or the Night King, then they’ll likely have no problem legitimizing Gendry.

If he and Arya survive the coming battles and do decide to marry, then it’ll be the union of Stark and Lannister that Robert Baratheon always dreamt of. What if they’re the ones who wind up on the Iron Throne?

More like this
Culture
Jan. 26, 2023
Michael J. Fox’s strangest movie remains a stupid, ridiculous joy
By Mónica Marie Zorrilla
Gaming
Jan. 19, 2023
Every possible Persona 3 Portable romance for both protagonist options
By Willa Rowe
Entertainment
Jan. 16, 2023
One scene in The Last of Us fixes the worst zombie trope
By Dais Johnston
LEARN SOMETHING NEW EVERY DAY.
Share: