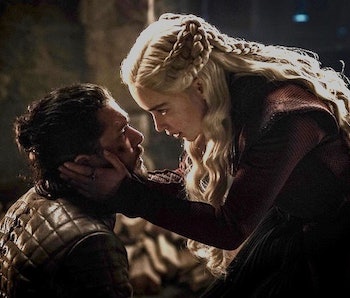 With just two episodes remaining in Game of Thrones, it’s looking less and less likely that the series will wrap up one of its biggest remaining plotlines: Who is the Prince That Was Promised (aka Azor Ahai)? The prophecy, which was mostly promoted by Melisandre within GoT, claims that one character will rise up to defeat the forces of evil as the reborn Azor Ahai, a legendary fighter who wielded a flaming sword and defeated the White Walkers during the original Long Night.

But don’t give up hope yet. There’s still a chance for the Azor Ahai prophecy to come to fruition for a variety of different characters, from classic contenders Jon Snow and Daenerys Targaryen to underdogs like Gendry and Arya. (Remember, “prince” is a gender neutral word in the original High Valyrian.) Here are eight strong contenders for the title of Prince That Was Promised in Game of Thrones Season 8.

As a trueborn Targaryen, Jon pretty much ticks all the required boxes. All that’s left to fulfill the Azor Ahai prophecy is for him to plunge his sword into the heart of his beloved (RIP Daenerys, we guess). If the legend is true, when he removes the sword, it will be consumed in fire, giving Jon the extra boost he needs to take out Cersei or whoever else might be standing in his way.

Read more about why Jon Snow is probably Azor Ahai.

Aside from Jon, Dany is the strongest contender for the title. She pretty much meets all the qualifications as well, especially the whole thing about being “born amidst salt and smoke.” (Daenerys was essentially reborn when she walked into Khal Drogo’s funeral pyre and emerged unburnt with three baby dragons.) Of course, if Dany is Azor Ahai, that means Jon will likely have to die, but hey, it wouldn’t be the first time.

Read more about why Dany might be Azor Ahai.

The case for Tyrion is a little more flimsy, but fans of the character have clung to his meaningful interaction with Dany’s dragons back in Season 6. There’s also a chance he might be a secret Targaryan, which only bolsters Tyrion’s chances of being the unexpected Prince That Was Promised.

Arya’s life doesn’t overlap very much with the Azor Ahai prophecy, but there’s one big reason to believe she’s the Prince That Was Promised. According to Melisandre, the whole point of Azor Ahai was to defeat the Night King. Arya did just that, so does she automatically qualify for the title?

Read more about Arya’s claim to the Azor Ahai legend.

Jaime might seem like an unexpected pick, but his arc on Game of Thrones actually matches up quite nicely with the Azor Ahai legend. His gold hand might also give him an edge thanks to a possible mistranslation of the original prophecy. And, of course, Jaime killing his beloved to become the Prince That Was Promised would also fulfill another big prophecy, assuming his beloved is still Cersei.

Here’s all the clues that Jaime is Azor Ahai.

A bastard no more, Gendry is officially a Lord of House Baratheon after Daenerys made it so in Season 8, Episode 4. You might think this is setting up King Robert’s only living son to claim the Iron Throne, but what if he’s actually destined for something even greater? Gendry’s connection to the Azor Ahai prophecy isn’t the strongest, but he does have one big thing in common with the legendary hero: They’re both very skilled at making weapons.

Why Gendry could be Azor Ahai.

2. Everyone Is Azor Ahai

Hear me out on this one. What if there’s no one single Azor Ahai? What if, instead, everyone at the Great Battle of Winterfell was the Prince That Was Promised? Together, all our favorite characters (except Bronn) came together to defeat the Night King. As a bonus, this theory also turns Melisandre into a human version of Azor Ahai’s flaming sword, which is pretty damn cool if you ask me.

Maybe Melisandre was wrong. Maybe there was no Azor Ahai/Prince That Was Promised. Maybe Cersei will win and all our faves will die. This is a pretty dark note to end on, but for a show made famous by killing off everyone’s favorite characters with no warning, it’s probably best to hedge our expectations ahead of the final episodes of Game of Thrones Season 8.