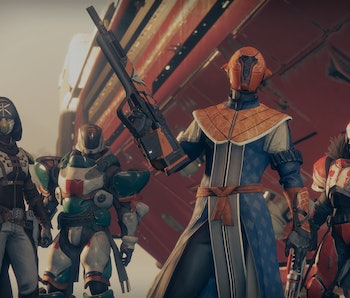 The follow-up to Bungie’s Halo-inspired first-person shooter infused with MMO elements, Destiny 2, is shaping up to overhaul the core Destiny experience by delivering new enemies, new mechanics, and a hard refresh for even the most veteran players of the franchise. Best of all? New loot.

Bungie had a massive presence at E3 2017 and followed up their May worldwide gameplay reveal with demos and exclusive reveals about the upcoming title.

E3 2017 offered some new trailers and teasers for the upcoming adventure and, onsite players at the expo had the opportunity to experience more of the game, including hands-on gameplay with some of the new subclasses that will be available in Destiny 2. Though there are still a number of lingering questions we have for Bungie’s sequel, we might just have to wait until the July beta to get any answers.

In the Destiny 2 trailer revealed as part of Sony’s stage presentation — titled “Our Darkest Hour” — the principal villain, Dominus Ghaul, tosses the player character around like a rag doll, saying, “You are not brave. You’ve merely forgotten the fear of death. Allow me to reacquaint you.”

Then he straight-up kicks your character right off a cliff. In addition to previous trailers confirming that you lose all of your loot and the Last City is ravaged, Destiny 2 is also offering up a reason for the disappearing subclasses and why even veteran players have to start from scratch again.

And it’s largely because:

The villain Dominus Ghaul doesn’t think the Guardians are worthy of the Traveller’s Light. After destroying the city and driving its inhabitants away, he and his Red Legion put some kind of massive device on the Traveller that cuts off access to the Light for humanity’s heroes, including NPCs like Ikora Rey and Commander Zavala.

In Destiny, the concept of “The Darkness” was murky at best, as formless and formidable as the “Light” that gave players’ Guardians the power to fight with their various forms of space magic and get resurrected countless times.

Almost 700 years before the start of the first game, the Darkness swept through the Solar System in an event known as the Collapse that devastated humanity. The Traveler supposedly sacrificed itself to suppress the Darkness, but the evil force influences every major enemy alien race in Destiny, particularly the Hive and Vex.

In an interview with Kotaku, Game Director Luke Smith confirmed that Bungie never really understood what the Darkness was and as such, it was removed entirely from Destiny 2 until they can better define it.

Players who choose the PlayStation 4 as their console of choice for Destiny 2 get exclusive time-locked content: a competitive multiplayer map, a three-player cooperative Strike, a blue and white colored ship, specialized gear sets, and an exclusive exotic weapon. These perks will be available exclusively for PS4 players until at least Fall 2018. The strike “Lake of Shadows” takes place in the new area on Earth, the European Dead Zone.

The real perk for players will be the exotic sniper rifle Borealis, which can switch between the three elemental damage types: Arc, Solar, and Void, which can be swapped at will.

Bungie had a pretty exclusive relationship with Sony during the original Destiny’s lifespan. Specific weapons and strikes were PS4-only for a period of time before making their way to the Xbox One as well.

The PC version has a release date

Announced as part of Sony’s E3 2017 press conference, the PC version of Destiny 2 will be released on October 24 — that’s almost two months later than the console versions.

The first Destiny never got a PC version, and early reactions to the Destiny 2 PC version are largely positive, especially with regards to graphical capabilities.

The release date for console versions was moved up

If the release date changes on any ambitious AAA video game, it’s usually a release getting pushed back for technical reasons. Perhaps because Bungie is so confident in what they’ve produced or just because development was ahead of schedule, the release date of Destiny 2 on consoles was moved up from September 8 toe September 6, 2017.

Dates for the Destiny 2 beta were formally announced at E3 2017. PlayStation 4 players yet again get preferential treatment, with PS4 pre-orders granting early access on July 18 and Xbox One pre-orders for the following day. Open beta kicks off for both consoles on July 21 with the whole thing wrapping up July 23. The official word on the PC version beta is still some time in late August.

The Titan bubble is back

During the E3 conference, Game Director Luke Smith confirmed that the infamous Titan bubble would be back but under an entirely different Titan subclass.

Whereas in Destiny the bubble was the Super ability for the Void-powered Defender Titan, it will now fall under the shield-wielding Sentinel subclass. The Defender is, of course, one of the subclasses that have been permanently removed. In addition to wielding a shield that can be tossed Captain America-style, the Sentinel will also have the option of deploying the Titan bubble which can protect allies.

All of the PvP content has been reconfigured for 4 vs. 4 matchups, which means no more Rumble

Bungie’s community manager, David Dague, aka DeeJ, confirmed with IGN that the previously announced shift towards 4 vs. 4 engagements in Destiny 2’s PvP mode — called the Crucible — will commit entirely to 4v4. That means that Destiny 2 will not feature a free-for-all playlist that was called Rumble in the first Destiny:

“For now, Rumble is gone. The Crucible is unified as a 4v4 engagement. […] Destiny is in many respects a cooperative experience. We want the Crucible to be where teams of players come together to fight together.”

There will be no ranked PvP — at least initially

Coinciding with a lot of initial assumptions made about the pointed shift towards 4v4 in Destiny 2’s Crucible gameplay, modes like the hyper-competitive 3v3 Trials of Osiris will be missing in the sequel.

“We’re not doing ranked PVP. We’re seven, eight weeks away [from release]. We have an idea of something we might do. I don’t wanna commit to it here because I’m not sure it’s gonna happen. If we don’t get it for September 6, there’ll be something, some way of players showing off their prowess to other people. Which is ultimately what a ranking system is. We’re working on something.”

The Raids will have a new Death Penalty mechanic

One of the mysterious new mechanics mentioned by Destiny 2’s Luke Smith was the introduction of a new “Death Penalty” mechanic during the raids. During an interview with Giant Bomb, game director Luke Smith said:

“The raids should always be challenging you to cooperate, collaborate, and communicate. But I don’t want to bring the difficulty down. We had a conversation – we have a brand new death penalty in the game for raiding. I think it’s pretty unfun to die and just watch on hard mode. So we have a brand new death penalty and on the normal mode raids people have talked about wanting to remove it because it’s different and why not just use the strike difficulty. But we don’t want to change the difficulty because we believe our players are smart. We believe that motivated groups of players can take on these challenges and complete them. We’ve seen that.”

The next stop for Destiny 2 will be the console beta next month.

More like this
Gaming
5.26.2022 6:17 PM
You need to get the most eccentric open-world RPG on PlayStation ASAP
By Hayes Madsen
Gaming
5.16.2022 8:22 PM
PS Plus library includes a rad Red Dead DLC and 7 more secret gems
By Joseph Yaden
Gaming
5.20.2022 2:00 PM
Everything you need to know about the Marvel’s Wolverine game
By Tomas Franzese and Joseph Yaden
Related Tags
Share: