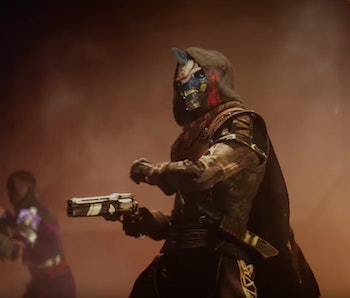 Destiny 2’s massive live stream on Thursday revealed many of the sequel’s story and mechanics, but one noteworthy aspect Bungie unveiled was the big change that makes it so NPCs can now take part in combat missions.

Spoilers for the fall of the Tower in Destiny 2 below.

The war on the homefront previously featured in Destiny 2 trailers — like Cayde’s drinking rant and the official first trailer — saw the destruction of the Tower and Guardians regrouping after the battle’s fallout.

But in Bungie’s live stream, we learned that in the first mission of Destiny 2, your Guardian will fight alongside the leaders of the Vanguard during the assault on the Tower by the Cabal. Ikora, Cayde, and Zavala use their signature powers to fend off the intruders, and it looks like you’ll have to team up with them during sections of the game.

Ikora uses a Nova Bomb in one scene to blast the wing section off a Cabal dropship, and in the opening gameplay cinematic, Zavala uses a Ward of Dawn bubble to shield the people in the Vanguard room from rocket fire.

What’s more is that the entire first mission takes place inside the Tower itself, which might just be the last time you set foot in there. And with all Guardians losing their light rather early in the game, who knows how that will impact the heroes of the Vanguard throughout Destiny 2.