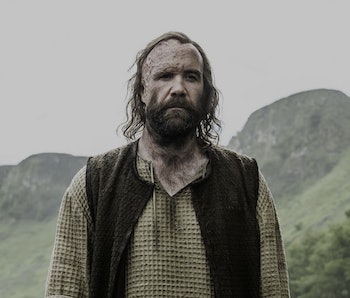 The Hound and the Mountain will meet again — and they’ll have a hell of an audience.

Season 6 of Game of Thrones might have cruelly taunted us with the possibilities for Cleganebowl — a long-running fan theory pitting the Clegane brothers against each other in a fight to the death — but it looks like it might happen after all in Season 7, when a massive meet up of nearly every major character goes down in King’s Landing.

Turn back now if you don’t want spoilers, Cleganebowl truthers. A new Season 7 set report, likely from the finale (as Jeremy Podeswa is directing it), puts an unprecedented 17 major characters in the same location. For a show that waited five and a half seasons to reunite Jon and Sansa and is still making us wait for Jon and Daenerys to meet, this is huge news.

There are three important takeaways from this. Firstly, as lots of Lannister armor has been spotted too, it seems to suggest that the Season 7 finale will be Queen Cersei’s last stand; a battle between the Lannisters and everyone else. Possibly Euron Greyjoy will ally with her if she cons him into thinking his big cock is welcome. But if Game of Thrones really wants to make this conflict complicated, it could also be a three-way battle between Cersei’s forces, Daenerys, and Jon fighting for the North.

Most intriguingly, the location is the Dragonpit, a ruined facility at King’s Landing where the Targaryens used to keep their dragons. Coupled with the set reports of major scenes at Dragonstone, which used to be a Targaryen stronghold, this seems to suggest that Season 7 will be both a comeback for House Targaryen and a dive into its past.

Secondly, the fact that Theon and Euron Greyjoy are there but Yara is not seems ominous indeed — as does the lack of newly returned Gendry. While Yara’s absence might spell doom, it seems odd for the show to bring Gendry back only to kill him. We’ll have to wait to see what this means. Perhaps he’s off discovering the cure to Greyscale.

But thirdly and most importantly, both Clegane brothers are present, which reopens the possibility for Cleganebowl. Seeing as how Season 6 dipped into fan service, this could have a real chance of happening. What is hype may never die.

More like this
Entertainment
Jan. 30, 2023
New House of the Dragon “making-of” book plunges into the fantasy hit’s creation
By Jeff Spry
Entertainment
Jan. 30, 2023
The Last of Us Episode 3 Features One Subtle Video Game Easter Egg
By Alex Welch
Culture
14 hours ago
Peter Jackson’s Most Unnecessary Movie Fixed the Biggest Problem with The Hobbit
By Ryan Britt
LEARN SOMETHING NEW EVERY DAY.
Share: