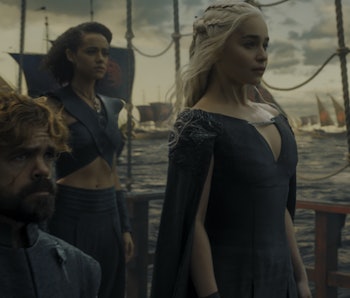 Ravens from the citadel have brought us news of Game of Thrones Season 7, and there are only two distinct possibilities: Daenerys Targaryen and Jon Snow will fight or they will fuck.

Set reports indicate that Emilia Clarke (Daenerys) and Kit Harington (Jon Snow) are both en route to the Dragonstone set. Yes, Jon and Daenerys will be meeting sooner rather than later, and the setting couldn’t be more apt. Recall that Dragonstone — which we have previously seen Stannis and Melisandre presiding over — was originally the ancestral home of the Targaryens in Westeros. Now that we know Daenerys’s deceased brother Rhaegar is Jon’s real father, this means aunt and nephew will come face-to-face for the first time in their family’s stronghold.

But as this is Game of Thrones, it won’t be a heartwarming Targaryen family barbecue. This is why they will either duke-it-out or get-it-on.

In favor of the latter, it’s very possible that the Daenerys and Jon union could be the show’s endgame. The show does like its incest — George R.R. Martin’s original plan romantically linked Jon with Arya — and the pairing of nephew with aunt would link the titular ice (former Lord Commander Jon Snow) and fire (the Mother of Dragons Daenerys). Plus, this adorable photoshoot kind of makes you want these two crazy kids to work it out.

But in favor of the former, Jon and Daenerys are both young leaders struggling in war-torn kingdoms who have vastly different visions and leadership approaches. Jon is a pragmatist who has no real wish to rule but has risen wearily to the occasion out of necessity. Daenerys is a conqueror who believes she is entitled to Westeros.

Nobody in this show ends up skipping off into the sunset after meeting — with the possible exception of Dany and Yara — but Daenerys and Jon’s disparate goals might put them on even more of a collision path than usual.

Early set reports have already sketched out Daenerys’s involvement in a major battle, and though her opponent remains unknown at present, it could very well be her own nephew Jon Snow.

If so, all bets are off in a fight between direwolf and dragons, but it’s about time the story provided a victory for direwolves.

More like this
Entertainment
Jan. 30, 2023
New House of the Dragon “making-of” book plunges into the fantasy hit’s creation
By Jeff Spry
Entertainment
Jan. 20, 2023
Legend of Vox Machina will continue — even if Dungeons and Dragons doesn't
By Eric Francisco
Culture
Jan. 25, 2023
30 years later, Star Trek is about to pay off a massive villain comeback
By Ryan Britt
LEARN SOMETHING NEW EVERY DAY.
Related Tags
Share: