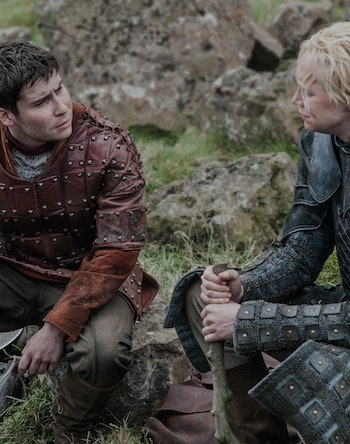 When Daniel Portman landed a small role on Game of Thrones at the age of nineteen, he never expected fans to ask him for selfies at the urinal five years later. He never expected to star in countless Internet memes and gifs, or to become a better person through living with the ever-earnest Podrick. He probably didn’t expect to chat extensively about both dicks and Shakespeare with Inverse either. But we did. We also talked about what’s it’s been like playing the world’s favorite squire through his formative years, how he’d like Podrick to die if he falls victim to the show’s high death toll, his approach to stunts, his aspirations to become a filmmaker and bring Shakespeare into the future, why Glasgow is the most underrated city, and more.

The world has been waiting for an in-depth Podrick interview, and we’ve brought it to you.

I have to begin with the longest running mystery on Game of Thrones: What did Podrick do in that brothel? In that Season 3 scene when the girls return his money, implying that he’s so magical, they won’t accept payment.

That would be telling. A magician never reveals his secrets. I quite like it like that — it means I can tell people exactly what I want to about it, which is fun. I’ve thought of some weird and wild explanations in my time.

There’s been one that he actually has two sets of genitalia and that he can operate them both independently or simultaneously. Somebody believed me when I told them that. That’s the one I usually try and get away with.

Between Tyrion, Bronn, and Brienne, you’ve had some of the best scene partners on the show. Which character do you particularly enjoy having Podrick interact with?

When I was working with Peter [Dinklage] and Jerome [Flynn], we were mostly inside and it was mostly scenes that were a little more wordy; talking politics. With Brienne, it’s more action-packed. We’re always out and about on our horses and fighting, so I’ve really had the best of both worlds. I’ve been on just about every filming location at some point, and I have had a chance to do all the inside talky stuff and the outside sword-fight stuff.

For the sword fight stuff — do you do your own stunts?

I did the fighting myself and a lot of the horse riding. I like to do as much of it as I will be allowed to. Obviously there are just some things that an insurance policy wouldn’t cover, and the stunt guys are so much more skilled and tougher as well. Sometimes you like to think you’re tough, and then you see a stunt man taking a bump and you just think, “I would be out of action for weeks if I was to hurt myself like you just did.” Apart from that though, I like to be quite hands-on with it. Everybody in the show is the same. Because at the end of the day, the character is still performing the actions. And the more somebody else does, the less of the performance is your own.

Do you have a favorite scene that you’ve done?

Episode 3 and 4 of Season 4. The jail cell scene where Tyrion sends Podrick away. From an acting standpoint, that’s my favorite scene that I’ve done so far. And then the other ones would be the horse chase at the start of season 5 and the sword fight at the start of season 6, just because they were two things I’ve always wanted to do in films or on TV— a badass horse chase and a badass sword fight. I managed to do both of them; that’s pretty cool. But in terms of an acting standpoint, definitely that scene in the jail cell with Peter.

What’s been the most challenging part of playing Podrick?

In the first couple of seasons, it was dealing with learning what it is to be an actor onscreen with no words. Because very often when I was in Season 2 and Season 3, he wasn’t speaking a great deal. That really taught me about the value of stillness onscreen, and how to be more subtle and get myself involved in scenes without having any words to say.

And what’s your favorite part of playing Pod?

It maybe seems strange to people who don’t work as an actor, but if you play a character for long enough, you do become very connected to them. I started the show when I was 19, and I’m 24 now. That’s a very important time in anybody’s life. I’ve sort of grown into a man on the show. And I am very fond of Podrick as a person. I feel like I’ve learned a lot about what it is to be a good guy through spending time thinking about who he is.

If I could give him one piece of advice, I would tell him to be confident. He’s a selfless, noble, wonderful brave dude, and I’ve had great fun being him.

Because of that, Podrick is a very popular character. I imagine you have a lot of interesting fan encounters. What have been some memorable ones?

Somebody asked me for a selfie when I was using a urinal once. They could have at least waited until I zipped up and washed my hands. So that’s a weird one. I get a lot of people grabbing my junk. I don’t enjoy that because it’s quite intrusive. But mostly people just ask what I did in the brothel. And because Pod is such a nice character, I always get really nice things. Usually it’s in a pub and somebody ends up buying me a drink — that’s fine by me!

Since Game of Thrones generates a lot of fan theories and memes and GIFs and internet stuff, do you come across them often? Or do you try to stay away from that?

I don’t actively go looking for it, but if I’m checking my social media and somebody sends me something, then I’ll look at it. Somebody made a fan-made trailer for what a potential ‘80s cop show spinoff would be like if Brienne and Pod were in it. I thought it was very funny.

Since GoT has a high mortality rate, I’m sure it’s occurred to you what a death scene might look like. What would be your ideal death for Podrick?

I think Pod is one of the unsung heroes of the whole series. He’s totally selfless. He gets thrown into the deep end a lot, and expected to do things he’s never been told or taught how to do properly. He looks inept at some points, but I’ve always thought there’s far more to him than that. He’s been in two fight situations that we’ve seen so far, and I think if he’s going to go out, he should be going out swinging. Maybe take out five or six other guys and then just get overwhelmed. Death by dragon or White Walker would be quite cool as well. Maybe to try and take on a White Walker and valiantly lose.

Do you have any other projects on the horizon in your off time?

I’ve adapted Romeo and Juliet into a screenplay, and most people will sigh and say, “Oh, that’s been done.” But I feel that the play is overdone in the same way; the characters are always portrayed in a similar sense. Romeo is a certain way, Juliet is a certain way. Through no fault of the directors or the actors who are involved in these projects, you get bit of a recycled product. In my opinion, the characters are much more textured and far more real. So the version that I’ve adapted is the most different version of Romeo and Juliet that will be made. It’s the most well-known story in the world, and everybody assumes it has to be a certain way. I would like to give people the opportunity to open their eyes to what Shakespeare can be and how accessible it is to everybody.

If we play up the honesty of the situation and make it less about two people who were always fated to die, it makes it far more accessible to the younger generation. So many people are put off by the way it’s taught in schools and the way it’s usually presented. I want to put Shakespeare back in the gutter – because that’s where it was written, that’s who it was written for. It wasn’t written for the people who sit with their pillows on their seats; it was written for the people standing in the Globe Theatre in the mud.

It’s set in Glasgow, my hometown. I’m sick of seeing films in Glasgow that show it off to be this place where nobody’s happy and everybody stabs each other. It’s a woeful misrepresentation of what that place is like. It’s a beautiful place filled with wonderful creative people.

Since Game of Thrones is really the only show of its kind — it’s the biggest show in the world — have you learned a lot from it about writing and directing for your film projects?

The scripts we work with are absolutely watertight. So that’s a big help — that the majority of my knowledge of what it takes to write a good script has come from the best on TV. And also watching how David and Dan have taken the helm of what has become this monster show, and managed to navigate their way through it has been a real learning experience. I’ve been able to see the best of the best doing a great job on something. Hopefully that will rub off when I start producing more of my own stuff.

What’s been the most surprising part of this whole journey for you?

That I made it this far. I didn’t expect Pod to be a guy who would make it to Season 6, so that’s pretty cool. Also just how ridiculously successful it is. You can’t plan for something to be the biggest show in the world. It’s the most watched thing, the most pirated thing, we won the most Emmys last year. It’s become this cultural and social phenomenon, where it’s this thing that people talk about when they go to work or to the pub. They’ve all got their own theories about what’s going to happen and what they like and don’t like. I’m incredibly glad and proud to be involved in something that means so much to so many people.