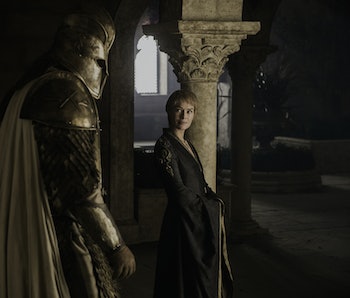 The most recent Game of Thrones episode officially cancelled CleganeBowl, the longstanding fan theory that The Mountain would face off against The Hound in Cersei’s trial by combat. But after you have a moment silence for CleganeBowl hype — and for intelligent writing in Arya’s storyline — direct your attention to Cersei’s conversation with Qyburn. Because it just confirmed the fan theory that Cersei will go the Mad King route and burn the city, just in time for Jaime to return and play Kingslayer 2.0.

In “No One,” Qyburn tells Cersei that his little birds investigated “that rumor” she told him about, and the result is that it’s “much more” than just a rumor. This sounds vague, but it very clearly alludes to Wildfire.

As you might recall from Jaime Lannister’s best scene, The Mad King stashed wildfire all around the city, intending to smoke the whole place out in a green firey inferno. Jaime did his Kingslaying act before the Mad King could get to that phase of his “burn them all” plan. In the ultimate twist of irony, then, “Kingslayer” is a derogatory term meant to denote Jaime’s lack of honor, and yet in slaying his king, he saved the city.

It’s been long speculated that Cersei will go the same route. She’s spoken several times about burning her enemies. Jaime himself alluded to it in “No One,” when he told Edmure Tully that both Catelyn Stark and Cersei would do anything for their children — “They’d do anything to protect their babies, start a war, burn cities to ash, free their worst enemies,” and the Queen of Thorns alluded to it in “The Broken Man” when she points out that Cersei is surrounded by enemies and asks, “will you kill them all?”

We also can’t forget the blazing green wildfire in Bran’s vision — which must have been of the future rather than the past, as Jaime cancelled the Mad King’s wildfire plan.

Although “No One” was a mediocre episode, Qyburn just confirmed to Cersei that the secret stocks of Wildfire around King’s Landing are still in place and ready for her use. Cleganebowl might be cancelled, but Cersei’s joy is about to finally turn to ashes in her mouth.