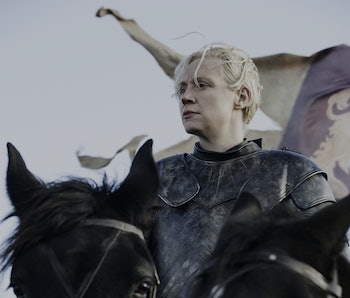 Game of Thrones is filled with death, deception, depravity, the occasional act of decency, and dialogue acrobatics. Each week, we break them down. Let’s dive into Season 6 episode 8, “No One.”

The North Remembers in the form of mentioning Catelyn Stark with more frequency than usual this episode, most strikingly, in the scene between Jaime Lannister and Edmure Tully.

Like Ian McShane, Tobias Menzies is a fantastic actor — chill as hell on Outlander — which is the only reason his scene with Jaime has the gravity it needs. Otherwise, as we haven’t seen him since Season 3, his confrontation with Jaime shouldn’t feel nearly as meaningful. When he says to Jaime, “Tell me, I want to know, I truly do, how do you live with yourself? All of us have to believe that we’re decent, don’t we? To sleep at night. How do you tell yourself you’re decent after everything you’ve done?” He’s finally getting at the heart of who Jaime Lannister is.

This question has always hovered around Jaime. It’s why he was one of the most compelling characters for the first three seasons, and it’s why his character faded into the background when the show lost sight of that. Although the Riverrun siege is rushed and anticlimactic — after all that, The Blackfish just dies offscreen? Seriously? — because it affords revisiting Jaime’s characterization, it’s almost worth it. And of course, when he speaks of his respect for Catelyn Stark, it’s a nice callback to one of the show’s best scenes.

The Lannisters Send Their Regards

We’re going to need to have a moment of silence for Cleganebowl hype, for although Game of Thrones has fulfilled many fan theories this season, by ending Cersei’s trial by combat, it’s laid this one to rest.

We’ll cross that off our list of possible places for The Hound’s story to go, but this episode made that quite clear anyway: The Hound is joining the Brotherhood without Banners. Although the writing was questionable in this episode — more on that in a bit — The Hound’s lines are in top form, with this being a particular standout: “Those are your last words? ‘Fuck you?’ Come on, you can do better. You’re shit at dying, you know that?” Never change, Sandor.

Now that the red priest Thoros of Myr — last seen resurecting Beric Dondarrion in Season 3 — has returned with Beric, we can add them to our growing list of intriguingly returned undead characters.

Running around the Riverlands

Bronn and Podrick’s scene together is an exercise in fan service, with a knowing wink to what fans want. It once again acknowledged Podrick’s sexual prowess — something we recently got to the bottom of when we spoke with Podrick himself — and it gave a hat-tip to the perceived sexual tension some fans see between Jaime and Brienne. (“I wonder if they’re fucking. I’d fuck her. You’d fuck her, wouldn’t you?”).

I am not one of those fans — I find their relationship compelling precisely for its rare platonic nature — but I was relieved to see that the show didn’t take it in that direction. Their moment in the tent in which Brienne tries to return the sword and Jaime tells her to keep it is as bittersweet and tender and melancholy as any of their interactions. It was the biggest moment of grace in an otherwise uneven episode.

A Girl Goes to Braavos

Unfortunately, it looks like we gave the writers too much credit with Arya’s bizarre storyline last episode: We thought they might pulling something clever and she was really Jaqen in disguise, as she was acting wildly out of character, but it turns out it was just shitty writing. Dorne is gone, so the shitty writing has migrated to Braavos.

It continues to be questionable here, with the most cringeworthy part being Arya’s apparent Jessica-Jones like agility to be alive after falling from great heights and her Hot Rod/ The Animal like long-fall down those steps. Instead of being absurd, that long tumble is played straight.

Still, Jaqen’s enigmatic smile after she states her intention to go home is intriguing. If Arya going home plays into his larger plan, perhaps we’re not done with the Faceless Men.

Uneasy is the head that wears the crown

Arya’s story isn’t the only place where questionable writing reared its head this episode. Tyrion’s Comedy Hour with Grey Worm and Missandei sped past “old” several episodes ago. The show is trying to make it humorous the way Tyrion is stalling for time, but it’s only making it apparent that the show itself is stalling for time. It’s baffling because, instead of watching Tyrion crack jokes, we could be spending time with Jon to develop his post-death psyche further so it feels meaningful. But instead GoT would rather leave Jon’s death feeling pointless by devoting screentime to scenes that truly are pointless.

Spare Coins from the Iron Bank