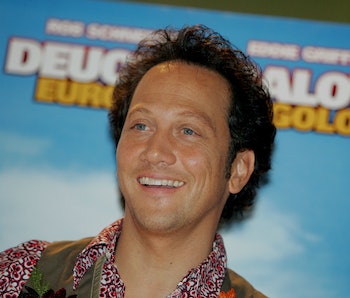 Late-twenty-somethings generally remember 2001 for one great tragedy, and secondarily, perhaps, for too many cultural anomalies to even count. Just looking at movie release dates might make this one year feel like 3 to most wizened millennials. In March, Bridget Jones’ Diary and Freddy Got Fingered came out a week apart. Evolution and Swordfish? Same day. In December, film buffs had to choose between The Royal Tenenbaums and A.I. for their Friday night out at the movies. This was the year that Warner Bros. and New Line volunteered the first installments of the Harry Potter and Lord of the Rings series, just beginning the push to make big-budget franchises ever-more epic and self-serious. (The nu-Marvel and DC dynasty was a few years off.)

At this time, the millennial gene pool was wrestling with, or at the cusp of adolescence. They were coming to understand what a film can be, “high” and “low” culture, and the real world in general. With dial-up Internet still limiting our information stream, it was billboards, ads in our TV Guide, and trailers during TRL commercial breaks that defined the monoculture.

Rob Schneider’s Adam Sandler-produced The Animal — a film about a man who dies in a car crash and is put back together with different animal parts — feels in many ways like a far cry from today’s comedic landscape. Sure, if Netflix’s view counts on Ridiculous 6 and The Do-Over are any indication, Happy Madison Productions films may survive longer than cockroaches have on this planet. But The Animal came at a time when Sandler-ism practically defined the mainstream of comedy, and was attempting to grow his empire out to accommodate his friends in starring roles. In 2001, he also offered David Spade a major chance to grow his cinematic profile with the regressive but entertaining Joe Dirt.

Films like The Animal, which turns 15 years old today, evidence a certain of-their-moment sense of gleeful irresponsibility. There’s no attempt in creating any character development outside of a few bullet points. The intended lifeblood of the thing is pissing, farting, and butts at a 7th-grade reading level — the level of non sequitur physical and sound-effect humor that once made Leslie Nielsen and Jerry Lewis famous. The same could be said for many films of 2001: Dirt, American Pie 2, Scary Movie 2, Rat Race, Corky Romano, Shallow Hal, Not Another Teen Movie, and most importantly, Fingered, a deeply convention-less film that one of the biggest comedians of the turn of the millennium — yes, Tom Green — got carte blanche to write, produce, direct, and star in.

Today, Inverse staffers — from both the realms of culture and science — gather to recall The Animal, and the cultural moment that made it possible, on its birthday.

Winston Cook-Wilson: I am realizing that Schneider’s film could serve as a marker of the halfway point in my life to date — at least, as I approach 30 and rewatch this film, it starts to seem like it does. What do you remember about The Animal from your past, Lauren, and how did it come to make an impression on you?

Lauren Sarner: In 2001, I was a tween who thought everything her older brother liked was the ultimate indication of taste. These were the halcyon days when the movies you mentioned — The Animal, Not Another Teen Movie, Shallow Hal, American Pie 2 — were the water-cooler conversational staples of teenage boys, much in the same way that Game of Thrones is our current cultural staple. When we re-watched The Animal yesterday, it was my first time seeing it in 10-plus years, and I found myself questioning everything I once thought I knew about myself.

Does this bizarre film — a 99% less-good David Cronenberg/ Island of Doctor Moreau mash-up of body horror and pseudo-reality, in which entire police stations ignore 911 calls in favor of playing baseball and “jokes” consist of characters stating the obvious (“it’s a furball,” one character says, after Schneider coughs up a furball. Humor!) — really qualify as comedy? Has the genre changed this much over the past fifteen years, or was I just young and naive? We certainly have terrible dumb comedy today — as you mentioned, Adam Sandler movies still rake in cash — but I’d like to think comedy has become more textured as our generation has grown. See 21 and 22 Jump Street, Neighbors 1 and 2, even Dirty Grandpa or my favorite movie of the year which is technically not a comedy but made me laugh harder than any other, The Lobster. These recent popular comedic films have not only concrete plots and characters, but something to say.

What are your thoughts, Neel? The Animal doesn’t even try to make any semblance of scientific sense. Have you found this has changed with comedy today?

Neel Patel: Holy shit — don’t get me started on the inanity of watching Schneider channel through the behavior of animals like a goddamn petting zoo. The Animal doesn’t even make a weak stab correctly pinning down science. But this isn’t actually new for comedy movies — and no Lauren, it hasn’t changed. Comedies have always taken extreme liberties with what they do with scientific fact. The difference, however, is the way modern comedies approach science — not as a device for silly humor, but as a vehicle for satire.

What keeps coming back to me is something Winston already mentioned above — The Animal, along with many other comedies of that era, have a very distinct pre-9/11 feel to them. They live in a more innocent time. Plot, character development, wit — these things are obstacles to easy-to-swallow laughs.

After 9/11 however, if a comedy was implementing some strange liberties with science as part of the story, it did so as a kind of critique or humorous take on a more modern notion or idea. I’m thinking of something like Idiocracy, or even Zombieland.

Take for instance the scene of Rob Schneider cavorting with a goat on-screen — which totally lacks purpose. If a modern comedy tried to do the same thing now, it would probably be as a satire of how such a situation would be absorbed through the lens of the internet and current media. Instead, in The Animal, it’s just “hey look at this fuckboy doing something outrageous!”

What say you, Winston? You’ve watched way more movies than I have throughout the last decade — do you think this is true?

WCW: I think a certain level of irony is built into most comedies today, even the goofiest ones. Even if you go back to Superbad and The Hangover — landmarks in modern madcap film — and you’ll find arch, neurotically self-deprecating main characters, doing buffoonish shit but staying close to what we might term a “relatable” human mentality.

There is none of that in The Animal. Schneider is just this doe-eyed imp character, something less than human even before he becomes an animal-man in the movie. He’s pure kinetic energy and reactivity. There’s a boldness about that, to me — something one might even term “savage.”

What’s odd is how little of what humor is there is due to anything Schneider does directly. There are so many sound effects — many of them the animal noises Marvin (Schneider) is supposed to be making — to do the work for him. The 47 million budget had to go somewhere, and it was to extending Rob Schneider the actor into Schneider the effects-enhanced, 2001 dynamo of id and mailbox-humping jokes. He turns into an airport drug dog and reaches around a man’s pants to find heroin in the place where people store heroin when they walk through security checkpoints.

I don’t know why, today, our comedic films can’t be as absurd as our least context-dependent memes — o shit waddup, it’s The Animal!

After 2001, things gradually went downhill. The Animal made double its budget, even if it only boasted enough jokes to count on one hand, but Schneider’s next star turn the following year — another body-swapping comedy, The Hot Chick — didn’t quite clear it. After 2004’s Deuce Bigalow sequel-come-too-late, European Gigolo, Schneider would be relegated to side roles or cameos for the rest of his career in the multiplex.

One can’t help but wonder, then: Was 2001 the most savage year for wide-release comedy?

NP: I entered this roundtable with the goal of successfully arguing that no — 2001 was not the most savage year for comedy. But after everything we just talked about, I dont know how to actually make that argument. You can maybe make a case for 2004 — where Will Ferrell cemented his career with Anchorman and Judd Apatow began his fratpack march to the top of the box office. But that would take a few years to truly manifest. 2001 was the last year we as a society went to see comedy movies without any expectation that a joke had to be good to gain a laugh. In that respect, The Animal is as savage as you can get.

LS: True savagery is a multi-layered concept: part audacity, part surprise, and part stupidity. After all, as Rob Schneider once said, the line between great ideas and terrible ideas is a thin one. (Rob Schneider never actually said that, so it was ballsy, surprising, and kind of dumb for me to attribute that quote to him. In other words, savage. Comprende?)

“Savage” might have different meanings to you,vbut I enjoy films and TV with risky ideas. If we’re going by that definition, then, 2001 was indeed the most savage year in comedy. These films rely on simple jokes, genital-humor sight gags, and flimsy concepts, and yet there’s something oddly satisfying and endearing about them. Rob Schneider glued a bunch of giant merkins to his ass and pranced around like a gorilla in a futile search for our laughter.

The Animal is not a good or even particularly enjoyable movie, but in terms of pure savagery, movies like this just aren’t made anymore. So on its fifteen-year anniversary, we salute it with glasses of unfunny badger milk.

WCW: As I wade into my quarter-life crisis, I can definitely confirm that non-jokes hit closer to home than ever. Savagery abounds. Lets end with this with the romantic theme of The Animal, and bid goodbye forever to innocence, now converted to content on the Internet.