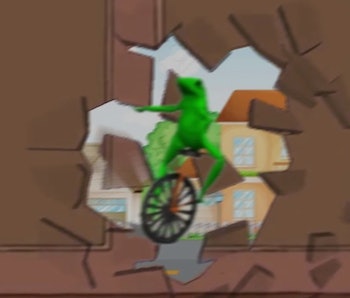 Let’s kick this off in the mode of a high school valedictory speech: Google.com defines “dialectic” as, in its second listing, “inquiry into metaphysical contradictions and their solutions…the existence or action of opposing social forces, concepts, etc.”

With memes, as in perhaps no other art since Eisenstein’s Battleship Potemkin, the juxtaposition of “opposing social forces” to make something that is distinctly larger than the sum of its parts is absolutely vital to success. Sometimes you’re gifted with a one-two punch that is so simple and beautiful that the Twittersphere parts like the Red Sea in its wake.

How the phrase “here comes dat boi!!” (later, “o shit waddup”) drifted toward a computer-animated image of a frog riding a unicycle remains, like the genesis of any meme, something of a mystery. Imagining this bit of perplexing natural drift is part of the fun, and central to watching the allure of this cute, slightly aloof little guy kick in place. As with any meme, Dat Boi forces us to consider “What does it all mean?” Where’s he going? What latent childhood trauma does my attraction to this fella speak to?

And to think, it all came from a recaptioned news screenshot, and an image of the computer-animated version of Pac-Man:

Another rhetorical question: Why do all memes have to emerge from gamer circles, rap message boards, or 4chan sociopaths? The first person to join the frog image with its catchphrase, as identified by Know Your Meme, was Instagram user “testicle.memes.”

It’s not a good thing to know that, in some way, you have let “testicle.memes” win, or maybe it is. Is it funny enough to you that someone typed in those words in a window, as their desired handle of choice?

All of these concerns seem to fade when you take a good hard look at this fellow — in affect, the gentler, Piccadilly-Circus-dwelling cousin of the WB Frog:

Here’s is our hero against some MIDI Soulja Boy:

He may or may not have arisen from this physics example, or some ancient Corel WordPerfect clipart database:

Add the “oh shit” from Fergie’s “London Bridge” and some Family Guy images and you can take “dat boi” into the convoluted uncertain future of memery:

Here he is, alongside all his other friends, his uncle — the sad frog — and even the hallowed Doge in a doctored Force Awakens trailer:

O shit waddup, I love this little guy, already unicycling so irreverently both into the future and the past. The world works in…