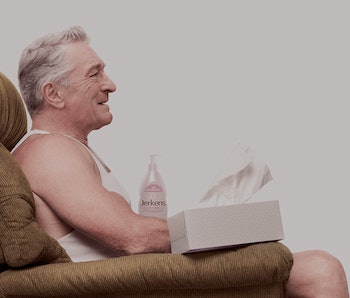 “Do not go gentle into that good night,

Old age should burn and rave at close of day;

Rage, rage against the dying of the light.”

What was the last great Robert De Niro performance you remember? What was his last truly evocative role — one that made you say “Here is the Robert De Niro of Taxi Driver and Raging Bull giving his all, fighting against the tide that is pulling him toward a series of curmudgeonly roles in Rob Reiner films and collecting already-bronzed lifetime achievement plaques?” Most would rightfully claim it was Meet the Parents. If you’re murmuring “David O. Russell” to yourself feverishly, you should either stop fooling yourself right now or just stop reading this article; De Niro-as-prestige-prop isn’t going to cut it here. Here’s perhaps the more instructive stance: De Niro has been flirting with or embracing self-parody since the ‘80s, and nearly all of the dozens of films he’s made since then are just fractals of that depressing whole.

Taking a hard stance on the DNS (De Niro Situation) — which by now feels as lasting as some lingering, stalemated overseas military occupation, the U.S.-in-Yemen of blockbuster cinema — implies that you believe that you have come to grips with this man in some permanent way. But if you take nothing else from this article, believe me on this point: Nothing you think you know can prepare you for Robert De Niro’s latest film, Dirty Grandpa. You may forget the particulars of some of the degenerate one-liners, but you will never forget this De Niro, in the way you forgot him in Being Flynn or that one horror movie with Dakota Fanning.

I’m not going to speculate about agency here, but it’s almost as if this man wanted a foolproof way to subvert his career’s insistent, almost martyr-like mediocrity. It’s not his fault that he ended up on this track, necessarily: Hollywood seems to drive worn-in and well-loved performers like him to it. So De Niro chose a more daring and treacherous route to break the cycle. He did not attempt a role in a self-important HBO biopic, or a tear-forcing, Focus Features-y, Alexander-Payne for-dummies, arthouse one-off. That road leads back to the same tedious place eventually. The 72-year-old actor put his time-tested comic shtick in a context not even the raciest available preview can prepare you for.

You think you know, reader: You’ve seen the trailer shots of Aubrey Plaza getting sunscreen sprayed suggestively on her chest in the preview, the “wanting to have unprotected sex with college girls” line by the pool. If you’re one of those people who cares about such things, you might have even done your DG research and learned that the film is the handiwork of the Sacha Baron Cohen co-writer who helped bring us Borat, Bruno, and “Throw the Jew Down the Well.” You may think you know, but you don’t.

There is a part of you that has convinced yourself that Robert De Niro would just do anything for a paycheck. There was a part of me who joked around all-knowingly, prior to entering the theater, imagining the Hollywood lunch meeting where the elevator pitch was put across (De Niro: “So I’m the ‘dirty Grandpa’? Ha! Love it. Where do I sign?”) Would that it were so simple. De Niro has so much more skin in the game here than one could ever have dreamed. Dirty Grandpa makes your average “dirty old man” comedy look like Waking Ned Devine. When ex-Army Special Forces soldier Richard “Dick” Kelly — father of square, overbearing lawyer Dermot Mulroney — loses his wife of 40 years, and tricks his grandson into accompanying him to Daytona Beach for Spring Break the day after her funeral, it is, very simply, because he “want[s] to fuck.” “I want to fuck a horse and drink its blood,” he says.

Marginally, there is the conceit that he is trying to help his grandson out of an impending marriage that he doesn’t actually want, and to get his life on a new track. But when this thread crops up in the script, it is pushed away — comically — as quickly as possible. In the film’s final, ribbon-tying moments, Dick Kelly (De Niro) hands his grandson a knife, and recites the motto of the Green Berets: “De Oppresso Liber, or “to liberate the oppressed.” All the crack cocaine and penises (either Sharpied on faces, or real and in close-up) have just been to assure a happier life for his grandson. Mazer makes sure that what we are really left with in his scene is an apropos-of-nothing koan: In the ‘80s, Andre the Giant once fingered five women with one hand at the Playboy mansion.