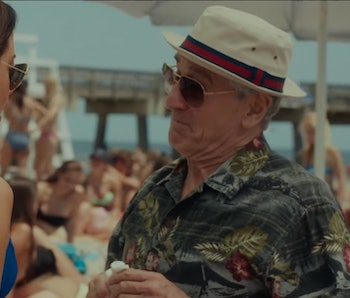 Let me first just present, without comment, the significant beats from the preview for Dirty Grandpa, a new comedy film starring Robert De Niro, Zac Efron, and Aubrey Plaza that is coming to theaters on January 22nd of next year. I’ve included time code so you can follow along.

1:04 De niro: (taking a selfie with women in their early twenties) “Party ‘til you’re pregnant!”

1:41 De niro (to Efron): “The greatest gift a son can get his grandfather is a hot college girl who wants to have unprotected sex with him before he dies.”

Rewatch that beginning: De niro calls a pink Mini a “labia.” “Get that Borat director in here,” we imagine the actor saying, looking over his reading glasses after first reading the line. “Let’s make some magic.”

But in a day and age where two to six old-guy-comes-to-bittersweet-catharsis De Niro flicks drop annually, Dirty Grandpa feels like an exciting new avenue for the 72-year-old actor. It’s possible we’re at a turning point for the elder De Niro — the beginning of a third phase of his late career, a.k.a. decade-and-a-half-long descent into self-parody.

When did De Niro go from being one of the greatest American actors to a person who was in Everybody’s Fine? I’d say the turning point for our former Raging Bull was 1999’s screwball comedy Analyze This. It was the moment when DeNiro put aside the borderline method-actor intensity and started phoning in his idea of what people want when they go to see Robert De Niro in a movie. People loved that, and the far more successful Meet the Parents followed on its heels. There was a lot to love here, but this De Niro was clearly a different beast.

Since Analyze This, Robert De Niro has been in — get this — 40 movies. That’s right, 40 of them, in just 16 years. One wonders how he had time to read the scripts (clearly he didn’t read all of them). It’s been a slow descent first into pat, comically generic thrillers (he and Pacino intersected in their downward trajectories in 2008’s The Righteous Kill) and even horror (remember Hide and Seek? Or Godsend?) Then the landing gear started to come out — lighter fare started sprinkling in more and more. By 2011, we were definitively into old person core territory — in the realm of Being Flynn, and his turns in the budget Love Actually ensemble flick New Year’s Eve and Silver Linings Playbook.

Softer aging-De niro roles like these marked the beginning of Phase Two, which most might have assumed to be the final becoming for the actor. There’s no going back once you’ve ended up in The Big Wedding, right? Occasionally, there would be low-stakes action flick bit roles, but movies and characters that were 100% about being old had become the default for De Niro.

If Nicholson could do it — Something’s Gotta Give, The Bucket List, About Schmidt — you know De Niro can. All he needs is the right scripts to turn it all the way up and make some truly upsetting movies. First stop: literally having sex with Aubrey Plaza in a movie, and even in its preview.

Damn, De Niro. We didn’t know you had signing off to be in Dirty Grandpa in you.