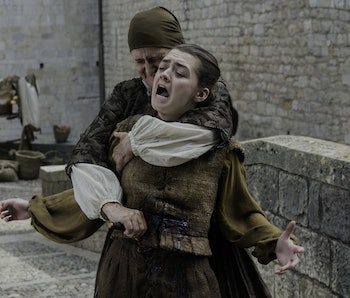 Arya’s storyline on the most recent Game of Thrones episode is poorly written, if everything is as it seems. It’s inconsistent with Arya’s character to wave a bag of money around demanding her own ship cabin — also, where the hell did she get that money? — and it’s extremely stupid of her to be so carefree around an old woman when she knows an army of assassins who can look like anyone is after her. But Arya isn’t dumb, and the Game of Thrones writers are hopefully not either. It’s possible that all is not as it seems.

One Reddit user pointed out that Arya appeared to be right handed when she tossed that moneybag. Because Maisie Williams is a great actress with a killer style game, she’s previously gone method on Arya’s left-handedness. Because she’s as big of a boss as Lyanna Mormont, when she was 11-years-old, she said, “I’m right-handed, and when Mom was reading the first book, she told me about Arya being left-handed. From then on, I was like, ‘Alright, I’m going to try to do everything left-handed.’

So the right-handed scene could be a tell that it’s not really Arya but Jaqen or another Faceless Man in disguise. Although it seems you must be dead to donate your face, recall the end of Season 5 when Arya saw her own face on a Faceless Man.

There is precedent in the books for a “fake Arya” storyline — this could be the show’s way of nodding to that even though it chose to skip it.

Of course, it’s also possible that the show decided that, since the Dorne subplot is nowhere to be seen —and thank the many-faced God for that — there still needed to be shitty writing in there somewhere.

But even if that’s the case, perhaps The Hound’s presence in his old friend’s life could help liven things up.