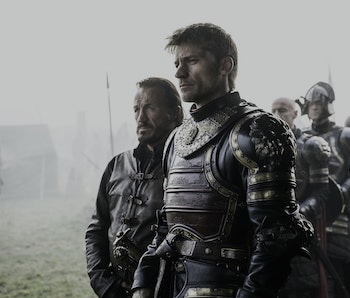 Before you think this is blasphemy, let’s get one thing straight: We don’t want Jaime or Brienne to die. Brienne is awesome, and after two tepid seasons bogged down in sup-par storylines, Jaime is showing signs of also resuming his former awesomeness. But it’s highly unlikely either will make it to the end of the story. Brienne is far too decent a human being to last long in the world of Game of Thrones while, as a reformed pseudo-villain who has been misunderstood by the larger world for years, Jaime has “tragic hero” written all over him. There’s no way the writers will let these two escape.

If they must go, then, the best we can hope is for an emotional and meaningful sendoff. After all, Game of Thrones doesn’t always give its characters their just rewards: Starks get depressingly dishonorable deaths like a beheading ordered by a petulant teenager or a throat slit at a wedding. Even Tywin Lannister, for all his ruthlessness, didn’t deserve to die on a toilet.

Jaime and Brienne have one of the few pure relationships on the show. They’re not bound by blood or sex or power. They are two people who, after getting off to a rough start, genuinely treasure each other. Sure, Sam and Jon are the same way, but Sam arguably is partly bound by power: He’s always seen Jon as holding a higher position in life. Sansa and Jon are bound by blood — probably — Jaime and Cersei are bound by a twisted mixture of sex and blood, and though Varys is genuinely fond of Tyrion, there will never be a moment when power does not factor into the equation.

But in the ensuing conflict to come, Jaime is fighting against The Blackfish at Riverrun while his great-niece Sansa has sent Brienne to ask him for assistance. This will certainly put them at opposing sides in the conflict and make for an emotionally rich confrontation. “If you attack the castle,” Brienne tells him in the teaser for the next episode, “Honor compels me to fight you.”

It isn’t realistic to expect them both to emerge from a battle alive, but to die by anyone else’s hand would make their deaths as tragically pointless as Ned’s or Tywin’s. If they’re going to go, let them kill each other. Because their deaths deserve our tears, not our sighs of “great, another meaningless death” exasperation.

More like this
Entertainment
Jan. 12, 2023
Harry Styles’ Eros is returning to the MCU — but why?
By Eric Francisco
Entertainment
14 hours ago
Teen Wolf: The Movie is fan service done right
By Mónica Marie Zorrilla
Entertainment
12 hours ago
Wolf Pack is proof that supernatural teen shows can still be bad
By Dais Johnston
LEARN SOMETHING NEW EVERY DAY.
Share: