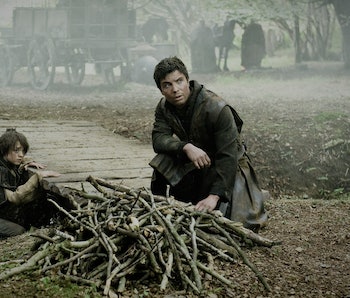 The early set reports are confirmed. Kind-hearted bastard and slowest rower in Westeros, Gendry Waters, is finally returning to the story after a four season long absence. And you might be surprised by where he’s showing up.

It would make the most sense for him to rejoin the story near the North, where he could run into Arya. After all, he was one of her only friends, and she even had something of a crush on him. To readdress that relationship when she is older, wiser, and far more violent and nihilistic would be fascinating.

Barring a meeting with Arya, the second most sensible possibility would be for Gendry to encounter the Brotherhood Without Banners, a Season 3 subplot that was reintroduced in Season 6 along with its leaders Thoros of Myr and Beric Dondarrion. Gendry and Arya traveled with the Brotherhood for a time in Season 3. Now that Sandor Clegane has also joined them, that would be a way for the story to link two fringe yet fan-favorite characters.

But according to the most recent set reports, Gendry won’t be with Arya in the North or roaming around with the Brotherhood; he’ll be at Dragonstone. This is hilariously absurd because it means he got absolutely nowhere after four seasons of rowing — remember, Dragonstone was where we last saw him. The entire reason for his prolonged sea adventure was to escape Melisandre’s sex-magic, which she ensnared him in back when Dragonstone was her home base with Stannis.

Curiously, as set reports have also linked Jon and Daenerys to the same location, it looks like Stannis’s former domain (and the Targaryen ancestral stronghold) will have a major part to play in Season 7. Perhaps Gendry’s latent claim to the throne will result in a three-way battle between Stark, Targaryen, and Baratheon.

In the same manner as Cleganebowl or Starkbowl, should we coin it Startargatheonbowl? It doesn’t quite roll off the tongue as well. Luckily, a girl has until summer 2017 to work on the name.