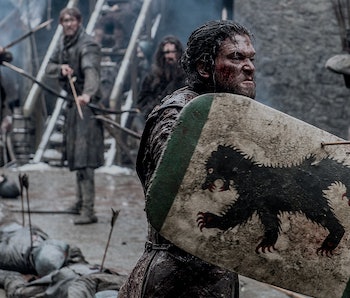 We now know the majority of directors who will helm each episode of Game of Thrones Season 7. Because most are returning from past episodes, and the upcoming season will be a change from the usual model at just seven episodes, this gives us a clearer idea of what we can expect from its tone and where its peaks and valleys will be. Spoiler alert, the man who beheaded Ned Stark is returning.

Jeremy Podeswa is handling Season 7’s premiere and finale. Podeswa has previously helmed Tyrion and Jorah’s Season 5 trip through the ruins of Valyria, Sansa’s controversial rape, the revelation of Melisandre’s true face in Season 6, and what was quite possibly the most anticipated television event of the decade: Jon Snow’s resurrection.

Unlike “Hardhome” and “The Battle of the Bastards” director Miguel Sapochnik, Podeswa excels at quiet character beats and emotional moments — though he still has an eye for sweeping visuals. Thus, although Season 7 is shorter, we can expect it to follow the pattern of beginning with a table-setting episode and ending with finale that ties together the loose ends while laying the groundwork for more. They will likely pack a surprise or two, but don’t expect a “Hardhome” type of hour to conclude the season.

Mark Mylod will reportedly direct the second episode. Mylod’s record has highs and lows: He previously handled Season 5’s “The High Sparrow,” which saw Jon make his first badass move as Lord Commander and execute the slimy Janos Slynt.He also did “Sons of the Harpy,” which introduced the less than fan favorite Sand Snakes.

In Season 6, he helmed the episode that culminated Arya’s nonsensical plotline in a most anticlimactic fashion: killing the Waif offscreen. On the other hand, he also directed one of Season 6’s strongest episodes that brought back Sandor Clegane and had a killer Ian “Tits and Dragons” McShane guest appearance.

Unfortunately, the Waif wasn’t the only character Mylod killed offscreen — recall that the Blackfish died offscreen too. We can therefore expect Episode 2 of Season 7 to likely contain a big death that happens offscreen.

As for the ever important penultimate episode?

Alan Taylor will direct Episode 6. As Season 7 is seven episodes instead of ten, this will take the place of the usual pivotal ninth “Shit Goes Down O’Clock” episode. Recall previous penultimate episodes: Ned Stark’s beheading, “Blackwater,” the Red Wedding, “The Watchers on the Wall”, “The Battle of the Bastards.”

Taylor directed many episodes in Seasons 1 and 2 when GoT was arguably at its best. He stayed away for later seasons but is returning for Season 7. His record includes the OG Episode 9 — Season 1’s “Baelor,” which killed Ned Stark. It’s safe to say then that Season 7’s most important episode is in good hands.

The most intriguing director is Matt Shakman, who is rumored to helm Episode 5. Shakman would be a novice to Game of Thrones but he previously handled many of the most iconic episodes of It’s Always Sunny in Philadelphia, including “The Nightman Cometh”. This would make sense as David Benioff and D.B. Weiss are longtime fans of It’s Always Sunny and even wrote an episode.

Perhaps the Game of Thrones musical the world has been waiting for is finally here. Forget shocking twists and deaths, the most anticipated part of Game of Thrones Season 7 is “The Night’s King Cometh.”