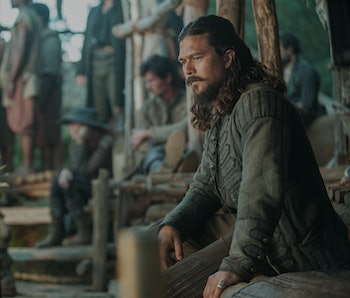 It’s official: Black Sails will conclude after Season 4. While many fans expected this, others met the news with disappointment. To know the end is in sight, with just 10 more episodes to go, is indeed bittersweet. But if we examine the facts, there’s far more sweetness than bitterness here.

How can a fan of the show celebrate it ending soon?

The story gets to close on its own terms

In this competitive landscape of Peak TV, many shows are taken out of their creators’ hands and subsequently experience botched or unfinished conclusions. Carnivàle and the underrated Angel were both canceled too soon, resulting in loose ends and unanswered questions. Deadwood, Firefly, FlashFoward, The Grinder, Terriers and the delightfully bonkers Wicked City all folded prematurely. Penny Dreadful tried to pretend capping at three seasons was the creator’s intent, but with a bizarre surprise series finale and many loose ends flying about, there was clearly some behind the scenes fuckery at work.

But here, there is none. Black Sails has taken glorious side trips to the Ranger crew; has paused to dive into the intricacies of 1700s Nassau and pirate politics, but it’s truly the story of who James Flint is and how John Silver became Long John Silver, the only man Flint ever feared.

If we examine the narrative, it’s apparent that this was intentional. The Season 3 finale introduced that element, clearly laying the groundwork for the final act. By its very design as a Treasure Island prequel, Black Sails isn’t sustainable as an extremely long-running show. Everything about its writing and plotting has been deliberate and meticulous: Flint’s past, Silver’s evolution, Vane’s sacrifice, Rackham’s rise. And in the era of Peak TV rampant with sudden cancellations, to know that this treasure of a show will get the ending the creators intended is a beacon as bright as the Urca gold.

Aside from being a wildly entertaining character, Charles Vane was the most honorable, pure-hearted, authentic pirate. He didn’t fall into the life by accident like Silver, enter it with an agenda like Flint, or with an idea of legacy in mind like Rackham. He was truly a man born and bred outside of civilization who simply sought to live and die on his own terms.

With his death, the show not only lost one of its most compelling characters, it lost one of the major threads of its explorations on what it means to be a pirate and the nature of civilization. Quite frankly, that was the main element that was concerning about Vane’s death — the possibility that the show would proceed for another two or three seasons without him. If this was a six-season show, killing him in Season 3 would be premature. Now, with just one season without him, we’ll get to see the effect his death has on other characters and Nassau — but the hole created by his absence won’t stretch on and negatively impact the show.

The death toll is rising

Black Sails keeps upping its body count. Season 1 saw an early grave for Gates, Season 2 killed Miranda and Richard Guthrie, and Season 3 axed a whopping four major characters: Dufresne, Hornigold, Mr. Scott, and Charles Vane. Logically, we can expect Season 4 to bring more blood and nooses. As captivating as Flint, Silver, and Billy are, if we had an entire season or two only featuring them, the show would surely lose one of its best assets: tone. More than any other show, Black Sails expertly balances action with quiet character development and navigates tragedy without getting dour. It’s a deeply thoughtful show that doesn’t take itself too seriously, which is rare indeed.

If we had an entire season with just Flint, Silver, and Billy, gone would be the levity — as Flint was never exactly inclined for light moments and both Silver and Billy are treading increasingly dark paths — and gone would be the diversity of voices and world views.

It’s sad the best show on TV is ending, but it will get the finale it so deserves, rather than falling to a plight that’s all too common: Plunging down rabbit holes of increasingly improbable plots as it stretches on too long and the writers run out of ideas. Thank the spirit of Charles Vane that Black Sails is not destined to become the kind of show that forces you to discuss it with these sentiments: “The first few seasons are fantastic…but then it all goes downhill.”