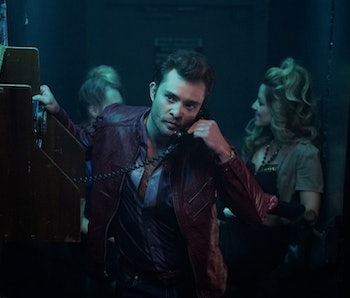 Corban Goble: At the time of this writing, Winston and I have watched the first two episodes of Wicked City, a new crime drama set in the ‘80s that airs on ABC Tuesday nights. It stars Ed Westwick (once, Chuck Bass) as a serial killer, Erika Christensen for some reason — as Chuck Bass’s love interest — and new accomplice, Jeremy Sisto as a cop who is seemingly playing a character from a different show. The script features the phrase “…on the Strip” every 90 seconds which is kind of like hitting the “re-center” button on Google Maps but for TV. The show’s poster featured the “i” in Wicked City traced out with a line of coke, which is probably the best way to communicate “BUCK THE LIVING FUCK UP” on a poster. The show is glossed over with a semi “Too Many Cooks when it gets really stabby” vibe. It’s so savage.

Winston Cook-Wilson: Yeah, truly. These days it takes something as little as a coke line instead of an “i” on a poster — not to mention a glam shot of the Bass-man scowling in the shadows — to convince me to watch a TV show. If there was ever a capital-TV, capital-S TV Show it is Wicked City. It’s cutting through the noise of schlocky primetime procedurals right to “the Strip”’s heart of darkness.

Hollywood, 1982: Everyone’s just trying to score a big part, hang with the right band, screw the chick/slick dude with the most connections and shiniest blazer. It’s that dog-eat-dog atmosphere that our killer takes advantage of — posing as an A&R man and film producer — to satisfy his mommy issues. I mean, there’s nothing to indicate it’s mommy issues for sure yet, but it’s almost definitely Freud-for-dummies mommy issues behind these murders. What else could it be on a show like this? The victims are all ambitious, promiscuous young women, and Westwick/Bass 2.0 stabs them with a ridiculous, Cutco-looking butcher knife he carries around with no sheath. Before this, he woos them all by making dedications to them on the radio — every time he calls in, it’s a major dramatic moment.

CG: They’re playing four songs on the L.A. radio in the ‘80s, tops. (He called in “Crimson and Clover,” lol). The bands they’ve seen at the Whiskey a Go Go so far are Ratt and Billy Idol, and in both scenes no one in the crowd is paying any attention to the band. That’s life on the Strip! This show makes the phrase “heavy-handed” look like some featherweight fists shit; these hands are made of plutonium.

Bass is a savage, man!

CG: Joe Walsh plays a music video director for Def Leppard’s “Photograph,” a completely inaccurate retelling of what the actual video came to look like:

WC: The major twist with WC is that, in a weird Red Dragon-y turn, Bass/Westwick meets nurse, hard-working single mother and sexually repressed Erika Christensen at the Whiskey a Go Go (so many lines ending in “the Whiskey” in this thing, too), but he decides to spare her life because of her commitment to her children (?) Then in approximately one day, he is in love with her. “Hmmmm,” the world is so obviously supposed to think, “This killer’s got a code! And a heart, maybe — though he’s been through unspecified pain, and he acts cold to the world!”

But, though we haven’t been shown as much yet, she’s definitely as fucked up as he is — deep down. Truly, Christensen and Westwick are the most unlikely on-screen couple I’ve ever seen.

Meanwhile, this oaf/savage Sisto cop is trying to solve Bass’s murders with his team, and using a wannabe-Rolling Stone music reporter Karen McLaren (AHS’s Taissa Farmiga, sister of Vera) to help him track down the killer. So the scenario is like: The Fall meets Paul Verhoeven for morons. What else am I missing here?

CG: Chuck Bass stages the murders on a lovers’ bluff, where invariably the girl he picks up — he’s pretending to be a realtor, pretending to be a casting agent, he never has a card — is giving him head even though he can’t get it up. Song comes on, boom, a flurry of stabs.

Also, Sisto is cheating on his wife — in case you couldn’t get there yourself, Sisto’s wife’s first line is “I WOULDN’T HAVE MARRIED AN IDIOT!” — with a Rose Byrne lookalike who is a cop posing as a drug dealer posing as a stripper. Despite being undercover, she meets Sisto outside her club on the goddamn Strip itself to give her a hot coke tip. (“I got you the guest list for the Strip,” she says). I think this character is the show’s least implausible one. Winston, please advise.

WCW: Yeah, that could be, but it might be just because they haven’t tried to really flesh her out yet, which will be when they screw everything up. In the context of this show, I feel like the undercover cop angle is probably going a whole lot of hilarious nowhere. Something something her cover is blown, something something Westwood’s next victim — that’s my best guess. Then, Sisto to the rescue — because what a hardass! Sisto is like ‘10s primetime Tom Atkins.

On the sidelines for all this is Sisto’s random, super-cocky partner who makes fun of his club outfit and undermines him constantly for no reason. Basically, everything he says implies “I have a bigger dick than you, dude!” But we both know — don’t we? — that Sisto’s the winner in that department. No question. A real question would be: Bass or Sisto?

CG: Honestly I’m gonna have to go Option C and pick the Chris-Brown-dressed-as-off-set-Leto-Joker-editor-in-chief of the alt-weekly Karen McLaren is writing for, who basically says “I’m trying to fuck you but I like your writing” in a scene about GIVING IT ALL TO THE STORY. They hook up. Anything can happen on the Strip.

Also, doesn’t Sisto basically figure out who the serial killer is within like…. 20 minutes of the show? Given that they’re kind of making Bass out to be like the ‘80s L.A. Hannibal in terms of just how deep his design goes, I have no idea why this show is showing you all of its cards. It’s like slamming cards up your nose, actually.

WCW: The odd thing about the detective side of the show is that it’s literally so banal that it’s hard to even pay attention enough to make sense of what’s happening. They slam the cards up, until you’re like “No, these can’t be the cards,” and your eyes glaze over. An easy conclusion, though, is that everyone is super bad at their job. The undercover cop throwing coke around the club, the wiry asshole partner and Sisto — who is just like so worried and emotionally fraught about nothing all the time that he can’t make any good decisions about how to catch this person. Feels like Bass is so savage that he’s making himself unbelievably easy to catch.

With plots like this — especially the whole thing in the last episode when they are scrambling for a full half-hour to figure out the whereabouts of the missing girl Westwick left the club with — you have to sort of throw logic and any concern with stakes out the window. Wicked City is just like this savage tsunami of sex, drugs, rock’n’roll and undirected psychosexual tension, where everyone talks to each other like robots set to “Dumb Noir,” makes up this fake idea of what the ‘80s was like, and turns the drama to 11. In that way, it’s kind of like the TV equivalent of Orgy’s cover of “Blue Monday.” It’s hard to explain, but it’s actually pretty Sick. What do you feel like the Sickest element of the show is, C? Where’s the appeal for you?

Also, the face-smashing ‘80s references to pull you into the time. Peter Frampton billboard? The Whiskey? “Tainted Love,” cuz ‘80s. I’m all in.

WCW: Everything is becoming cluttered with prestige TV, and it’s hard to give a particular, furrowed-brow fuck about any of it. Gone are the days of Mad Men Season 4 watercooler talk; there are too many choices to really unify behind any particular one show.

We need more outright Strip-heavy savagery like Wicked City on the bad TV tip. We need the ABC-friendly bathroom key bumps, awkward threesomes, forced cultural references and the ghoulish, Chuck Bass-core, bug-eyed psycho-mugging and dramatic chin juts to keep coming in full force. Then we can pretend we’re plowing through an 8-ball and blasting “Dangerzone” on repeat in a windowless shag-carpeted basement for the rest of time — or at least, until the end of the season. Chances are, it’ll just be one.

CG: Anything can happen on the Strip.