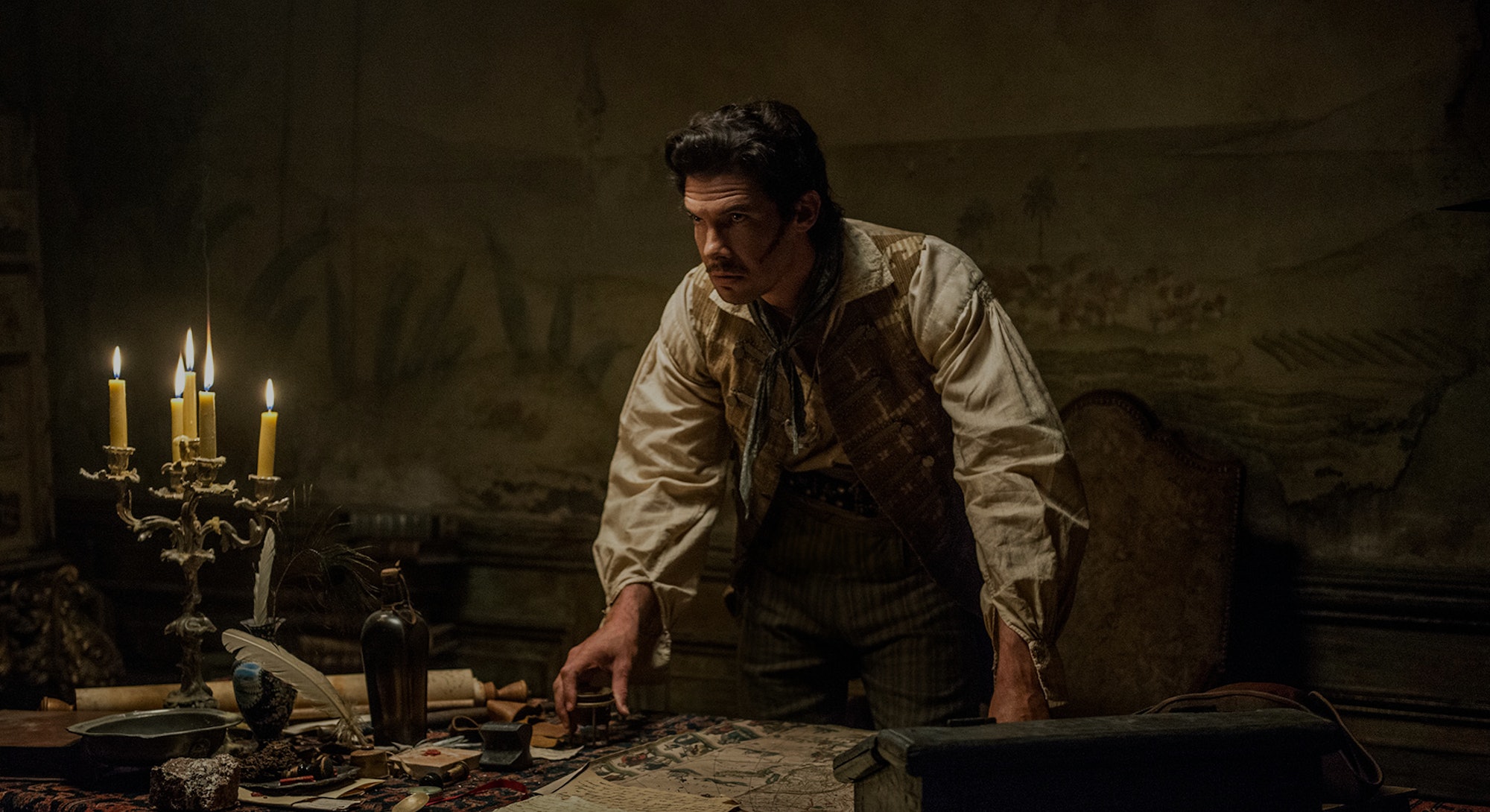 Black Sails’s Jack Rackham, played by Toby Schmitz, possesses many favorable qualities — he’s stylish, witty, well-read — but he’s never been a very good pirate. He’s not a skilled fighter and his attempts at strategy usually land him in dire situations his girlfriend bails him out of. With the affectation of a scholar, the hair of an ‘80s glam rocker, and the walk of a lead singer who is confused about where the stage is, he’s never exactly come across as formidable. Historically, his legacy is legendary — having pioneered the iconic skull and crossbones flag we associate with piracy today — but the Jack Rackham on Black Sails has taken time to get his sea-legs.

“There’s a kind of asymmetry to Jack,” says Toby Schmitz. “I’ve always wanted him to be a bit twisted. One of my first images was like a beaten up fox; a bit off-center compared to other characters who have both feet squared on the ground.”

Everything about Rackham, from his walk to his ever-changing sideburns, is off kilter and one of a kind. “There’s a kind of construction about him,” says Schmitz. “He’s invented himself, like a lot of these characters do. We always hear Flint say that he regrets — or at least has a lot of pain attached to — having created Captain Flint. But Rackham is a bit obsessed with his own invention. I like to think that he’s addicted to the craft of it.”

In the first two seasons, Rackham is often cast as the show’s court fool, so to speak. He steals every scene he’s in, but he can’t seem to gain respect. He’s frequently the object of scorn (recall Season 2’s “they pissed on me!”), and the most common catchphrase directed his way from both his partner and his former captain is “Fuck you, Jack.” Audience and fellow characters alike don’t initially take him seriously — and his penchant for looking like this hasn’t helped.

About his favorite flamboyant outfit from Season 3, Schmitz says, “I really enjoyed that sort of salmon coat he was revealed in as the King of the Castle at the beginning of the season. Tassels for absolutely no reason, just dangling off. Completely impractical! That was just splendid.”

Although his fashion choices will undoubtedly lead to calico in the near future — he is, after all, known as Calico Jack — Season 3 marks the first time we hear him say the word. It happens during his carriage ride with Woodes Rogers in the eighth episode.

His entire dynamic with Rogers has been a highlight of Season 3, as the men match wits and Rackham continuously provokes Rogers about his privilege. “I think Jack is a bit of a psychological terrorist,” says Schmitz. “He loves getting close with a bit of familiarity and then unsettling people. A few other characters get into people’s heads as well — but I’m not sure anyone else enjoys it as much as Jack.”

Their verbal sparring comes to a head when Rogers is ostensibly delivering Rackham to his doom in a carriage. Ever fixated on legacy, Rackham reveals his backstory to Rogers, perhaps to ensure that somebody hears it in the event that Anne fails to rescue him.

Schmitz says the audience is free to interpret whether or not Rackham was bluffing in his certainty of Anne’s rescue. “He’s a bit of an open book. What he feels shows on his face, which is not like a lot of other characters. When he does want to be duplicitous, it’s actually very easy for him to do it, because his poker face is right there underneath what everyone assumes is him being expressive. So when you think Jack is definitely telling the truth about something — for example, about how confident he is that Anne will rescue him — it’s always wise to wonder if it’s really going on or if he’s a great actor.”

About Rackham’s backstory, Schmitz says, “I had a lot of fun playing that, because it’s close to my own origin. My folks worked hard to create small businesses — book stores — and my life growing up was always about the family business. It was easy for me to tap into that, because it was close to my own life. It all fit with my ideas about Rackham so far. He’s self-made and loves the adventure that he’s created.”

“When I was auditioning for Rackham, the original character brief invited you to imagine him as an equivalent of a Wall Street trader,” Schmitz says. “The things I leapt on were ambition and an addiction to the deal or the double down. For a lot of those trader types, it doesn’t matter if they have billions of dollars — what they’re really after is the chase. That was the beginnings of what Rackham was about, and that still holds. Even down to the flashy suits, like you see those Wall Street types flaunting.”

Rackham’s flashiness has always clashed with the utilitarian gruffness of the two people he’s closest to: Anne Bonny and the dearly departed Charles Vane. Season 3 has seen the three share most scenes since Season 1. Schmitz says he enjoyed the episode 4 scene in the fort the most.

“Zach [McGowan] and Clara [Paget] and I had an instant chemistry. We fill different wheels of the tricycle,” Schmitz says. “The great thing about the scene in the fort is you see Vane on a back foot: He doesn’t know what he’s going to do. Jack steps up and does one of the butcher things we’ve seen him do onscreen.”

But now that Vane is gone, Rackham might have to step up on the physical side.

When I ask about how Vane’s death will affect Rackham going forward, Schmitz has a few thoughts.

“Jack is soaked with the loss of Charles in Season 4, there’s no doubt about it. I don’t think you can iron out Jack’s go-to sense of humor — people make gags at wakes out of necessity — but it does redefine him. He may never get anyone like that back again in his life, and he feels the need to pay respect and homage to who he lost. So it doesn’t completely change him, but it absolutely knocks him in a new and interesting direction.”

And because Vane’s last words fit his character so well (“Get on with it, motherfucker”) we can only imagine what Jack’s might be if the time comes. Schmitz has imagined it too.

“I’m of two minds,” he says. “Half of me would like to give a rip -roaring monologue with a couple of gags, and half of me would like an opportunity to see true panic. It’s amazing how many people actually lose their shit when they’re on the gallows. Once the confidence has been stripped away, what you actually do end up doing could be fascinating to go down that route.”