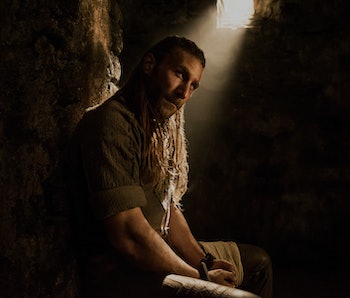 Black Sails is a show full of scheming, reversals of fortune, and general skullduggery. Each week, we’ll break down the conniving, betraying, ass-kicking, and unexpected alliances as they emerge. Let’s dive into Season 3 Episode 9, “XXVII.”

Blackbeard’s back in the game. His first order of business? Putting Eleanor’s head on a stick with the note, I angered Edward Teach.

Who is utterly screwed?

I recently said Black Sails beats Game of Thrones in many areas, but before “XXVII,” there was still one where GoT had an edge: Black Sails hadn’t earned my tears. Gates and Miranda’s deaths were sad shockers, but they weren’t essential. Charles Vane, on the other hand, was the heart of the show. And while provoking tears isn’t a criteria for great drama, mediocre shows certainly don’t possess that ability. As Billy said last episode, Vane was the best of them all. It’s hard to say what Black Sails will look like without him.

Because of that, I do have some concerns that his death is premature. We don’t know that next season will be the last; there could be two or three Vane-less seasons. And he was not only one of the most compelling characters, he was the most unique. He brought things to the table nobody else did: He wasn’t scheming and talky, but his mind worked in a fascinating way. He was a curious mix of impulsive, idealistic and oddly principled, which made him consistently unpredictable.

His every moment onscreen was riveting because you never knew what the hell he might do. Nobody else does gloriously nutty Vane-stuff (want to woo your girl? Leave a note with her enemy’s head on a stick!). Goddamnit, Vane was great. Too great to hang before the final season.

He was one of a kind, and now Black Sails has a gaping hole at its center. If this season’s big death was Max, Eleanor, Teach, or even Jack (sorry, Jack!) it wouldn’t disrupt the show’s chemistry as much. Sons of Anarchy comes to mind as a show that axed one of its best characters (Opie) too soon, and never recovered. As Black Sails’s quality has been so stellar, it would be a damn shame to see that happen. But only time will tell.

Whether or not it’s an auspicious move, hanging its second-most-essential character is an enormous pivot for Black Sails and an eye-opener. Previous depictions of onscreen piracy have been campy, because otherwise, the story is mightily dark. These lives are nasty and brutish and short. The fact that Black Sails has made us root for condemned men — heedless of how it will cut when they fall — is a testament to the fact that it’s the best depiction of piracy in pop culture.

I’ve talked about my issues with Vane’s Season 1 resurrection, but damned if I didn’t wish that would happen again now.

Pirate-gangster is the new buddy-cop

Flint and Silver’s conversation about their darkness was the scant ray of light in this episode. Their ever-shifting dynamic just keep getting more compelling. Though Silver has largely been more serious this season, his old sass reared its head when he said, “I didn’t mention it to you because — I don’t know, I just didn’t.”

Vane had some of his best lines, from his conversation with the minister (“You’re a sheep”) to his perfectly delivered pre-death soliloquy. He died as he lived — last words don’t get more badass than, “Get on with it, motherfucker.”

This week, it’s me and Black Sails. Not hostility, but disappointment. It pains me to write this because I genuinely love this show and want to help fix how criminally under-recognized it is. This isn’t beating the drum the way I intended, but I have to be honest. I’m not entirely convinced Black Sails didn’t shoot itself in the foot by hanging Vane too far from its end. And what fails to convince me is this episode.

He wasn’t only a great character; he was the primary plot driver. His storyline was rather aimless in Season 1, and its most common criticism was the leisurely pace. Whether or not you agree, there’s no question Season 1 is the weakest. Season 2 saw Vane more rooted in the narrative, and Black Sails improved exponentially. That’s no coincidence. I don’t call Vane “the heart of the show” just because I liked him. When Black Sails found its footing, a crucial part of that was when writers figured out what to do with Vane besides having him brood shirtlessly.

His personality was uniquely suited to drive the action: He did crazy unpredictable things, and Black Sails got away with the resulting plot turns feeling character-driven, because crazy unpredictable things were credulous with Vane. He was responsible, either directly or indirectly, for almost everything interesting that’s happened on the show, including nearly all the events in Season 2, Silver losing his leg, Jack’s ascension, the most engaging fights, and Flint’s continued existence.

A few episodes ago, when Flint left the Maroons, his story needed to be kicked into gear. How did he do it?

He was really saying, “let’s get the plot moving again, I know just the guy.” Sure enough, Vane instigated it during the duel. His actions would have felt like a deus ex machina coming from anyone else, but because it was Vane, it felt character-driven.

There’s a pattern here, though thanks to Vane, it hasn’t felt like one. Its writing mechanics have remained invisible, as they should. And it’s been a key part of what’s made the show exceptional. Upending it wouldn’t be quite so worrisome if Black Sails indicated that it realized the magnitude of what removing Vane — more than any other character — will do to the show. But even before he hung, he was sidelined for most of “XXVII,” and the pacing reverted to a crawl we haven’t seen the likes of since Season 1.

“XXVII” tried to make Eleanor the plot-driver, and it didn’t work the way it did for Vane. The fact that she pushed his execution against all advice, ignoring clear signs it would lose the streets —something she’s always been vigilant about — doesn’t correlate with everything that’s been established about her. She’s selfish and disloyal and vindictive, but she’s not dim. Lesser shows place plot before characterization for the sake of story convenience, but Black Sails has always been better than this.

This show is usually so well written, it’s impossible to believe it hasn’t thought through its largest upheaval. And when I spoke with Toby Schmitz, he did hint that the effects of Vane’s death will profoundly affect Jack and reverberate into Season 4. It seems, then, that there is indeed more thought behind it than there appears to be right now. So I’m hopeful it will become apparent, and like Season 1, this episode will be better in retrospect once we see what follows.