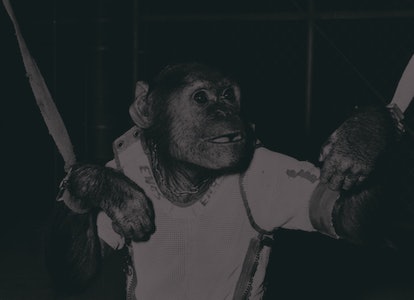 Stuff you'll learn in today's dispatch: “The third hominid in orbit” sounds cute, but to the people who were there, the truth is grim and shouldn’t be forgotten.

You’ll also learn how "high-functioning" is often used as a cover for people struggling with mental health.

Finally, you can answer, just in time for the holidays, why people think you can get high on nutmeg. What you won't learn: Why Russia blew up its own satellite.

This is an adapted version of the Inverse Daily newsletter for Tuesday, November 30, 2021. Subscribe for free and earn rewards for reading every day in your inbox. ✉️

In terms of the human family, as most broadly defined, the first three to orbit around Earth were Soviet cosmonauts Yuri Gagarin and Gherman Titov and American astronaut Enos.

That is, Enos the Chimpanzee, who was launched into orbit in a Mercury capsule on November 29, 1961, much to the chagrin of the human Mercury astronauts.

“Enos is interesting because he’s actually the third hominid in orbit,” University of Chicago space historian and National Air and Space Museum Guggenheim fellow Jordan Bimm tells Inverse. “That’s not the kind of record the human astronauts really wanted to see. They would have much preferred that be Colonel John Glenn.”

As Grimes coos, “girl, you know you’ve got to watch your health” a woman looks you dead in the eye and explains you might be displaying the “four hidden signs” of high-functioning anxiety.

Meanwhile, the mindfulness app Headspace offers to describe what it’s like to live with high-functioning anxiety, and the online mental health company Talkspace offers the same for high-functioning depression. Google search for both terms peaked this past year in February but has remained relatively steady. Most queries are looking for symptoms or a definition of the condition.

The issue is there’s not really an answer for those questions.

Info you can use:

Why Russia blew up its own satellite

The what, we know. On or about November 12, the Russian military tested an anti-satellite missile, or ASAT, by targeting and destroying a defunct Russian spy satellite.

The resulting debris field sent astronauts and Russian cosmonauts aboard the International Space Station scrambling for a potential emergency return to Earth, a hazard that could crop up many times over the next three or more years as the fragments slowly re-enter Earth’s atmosphere or find stable orbits.

It’s the “why” that is not yet clear:

Why would Russia destroy its own satellite in such a way that it might put its own cosmonauts at risk?

Why would a nation with such deep, historical investment in space travel develop such technology at all?

Can you get high on nutmeg?

Jeanine Roeters van Lennep is a vascular medicine internist at the Erasmus Medical Center and a self-described straight edge. She doesn’t do drugs and rarely overdoes it with alcohol, either. So when she woke up the night after a dinner in 2014 feeling dizzy, disoriented, and unable to recognize her colleagues or the campus, she was truly terrified. What, she asked herself, had happened to her at the dinner?

Her friends rushed her to the emergency room, where doctors were unable to determine the source of van Lennep’s confusion. They sent the confused and worried physician home with a shrug.

“They couldn't find anything expected that I had a high heart rate,” van Lennep recalls for Inverse.

“I thought, well, I better go home because I don’t know what’s wrong with me but there’s definitely something wrong. I’ve never experienced anything like this in my life.”

That does it for today’s edition of Inverse Daily. Remember to begin every meeting with at least five minutes of small talk.