Has Covid-19 changed our relationship to drugs? Why the answer is so complicated

“Drugs seem to be a really basic part of what humans do.”

— David Herzberg, a drug historian at the University at Buffalo 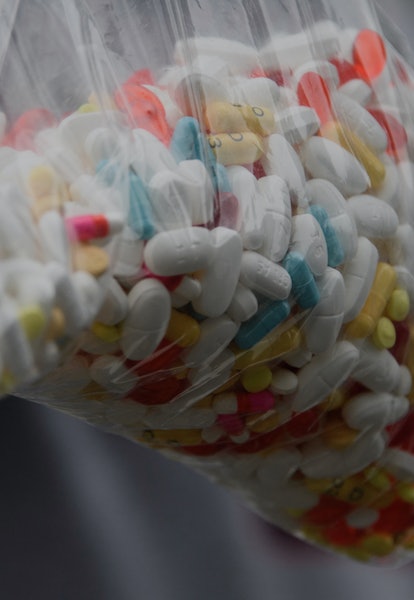 If three years ago Maddie Greer was told she was going to be smoking weed every day, she wouldn’t have believed it.

But when the pandemic hit, Greer, a 24-year-old writer from Georgia, changed. She started drinking so heavily she gained 80 pounds. She began having health problems, including constant heart palpitations. To quit drinking, she wanted something else to take the edge off, quiet the depression, and soothe her anxiety. She bought an ounce of weed and a bong.

“Like nearly everyone else, I was morbidly depressed and was presented with very few outlets for these new feelings,” Greer tells Inverse. “I feel like if I hadn't been cooped up in my house for over 18 months I never would've started.”

Greer had always had a pretty high baseline anxiety level but was generally able to manage it with exercise classes, social gatherings, and keeping busy.

“When the pandemic hit, I lost all of those outlets, and I was just left to reckon with my brain worms day in and day out,” Greer says. “When I started smoking, it felt like a release. Like all of the millions of things that should worry me just fell away. I feel like I'm in this pleasant little bubble.”

Research, and stories like Greer’s, suggest the coronavirus pandemic changed many people’s relationship to drugs in countries where these drugs are already common — be it alcohol, cannabis, prescription drugs, or party ones. In this case, drugs were less about feeling good and more about not feeling bad.

In fact, since March 2020 scientists have reported a general increase in alcohol, nicotine, and marijuana use, both medical and recreational. There’s also been a significant rise in abuse of prescription anxiety and depression medication, as well as opioids. Meanwhile, at the start of the pandemic, there was a decrease in the use of amphetamines and “party drugs” such as cocaine and MDMA, before returning to pre-lockdown levels.

What caused, and still causes, fluctuating drug use patterns is complicated. Experts tell Inverse that use can be linked to feelings of distress caused by the pandemic, but social patterns explain drug use too. The pandemic changed access to certain drugs, and motivations for use — depending on the substance.

And while this phenomenon may be a blip on the timeline, experts are eager to see if one related force will be long lasting: telemedicine and its potential to ensure drug use becomes safer and more controlled.

Substance use during Covid-19

Throughout 2020, 23 percent of adults reported drinking more alcohol to cope with their stress, according to the survey Stress in AmericaTM 2020: A National Mental Health Crisis. The survey also found 13 percent of Americans started to increase their substance abuse as a way of coping with stressful emotions in August 2020.

But while studies and surveys find an association between drug use and the onset of the pandemic, they don’t explain why that association is there.

Haley Shafir, a licensed clinical addiction specialist at Choosing Therapy, a practice based in New York City, predicted this rise in substance abuse at “the very beginning” of the pandemic.

“It was clear that a pre-existing epidemic of addiction and mental health conditions was bound to rise in response to stress, unemployment, financial insecurity, and social isolation,” Shafir tells Inverse. She argues it comes down to coping.

“Addiction is rarely about drugs or alcohol, but instead is about what a person is using these substances to numb, cope with, or escape from,” Shafir tells Inverse. “We become much more vulnerable to these chemical and artificial forms of connections when we are suffering from stress or some other psychological or physiological pain.”

“The latter, in turn, can create stronger chemical incentives for the dopamine and serotonin hits these drugs provide,” she says.

For David Herzberg, a drug historian at the University at Buffalo, it’s more about the social structures of access to drugs that drove the change in drug use throughout the pandemic.

“I haven't seen a lot of historical evidence that the sum total of human stress and misery has had a big impact on rates of drug use in the United States,” he tells Inverse.

He points to the Great Depression: “It was a time when there were enormous amounts of stress and anguish among a really wide range of people, and use of a whole lot of drugs went down because nobody had any money, global trade had cratered, and there wasn't as much supply around.”

How did access influence Covid-19 drug use? Herzberg ventures the pandemic provided extra justification for turning to drugs because of its seemingly temporary state, allowing people to believe that they would decrease their dosages after the pandemic was over.

“There was definitely an elevated level of community anxiety.”

We also don't need surveys to show certain drugs were used more at the start of the pandemic: In January 2021, Murray State University researchers analyzed sewage wastewater in Kentucky and Tennessee in an effort to spot Covid-19 outbreaks. They discovered something else along the way: A rise in prescription opioids and anti-anxiety sedatives and a fall in illicit drug use.

One of the most abused prescription opioids was hydrocodone, sold as Zohydro ER: Its use spiked by 72 percent in the first months of the pandemic. Benzodiazepines, a class of drugs used to treat anxiety, spiked by 30 percent, and antidepressants increased by 40 percent.

Subedi has continued to monitor the wastewater, and his preliminary data suggests meth and cocaine use in some communities are on the rise again, bouncing back to a pre-pandemic level.

“But we do not know how it will go further,” he says. “Overall, I think the level of community anxiety and the availability of the drug can significantly impact the drug use profile.”

The future of pandemic drug use

“Drugs seem to be a really basic part of what humans do,” Herzberg says. “We use an enormous amount of drugs and we typically pretty much always have.”

“It seems like during the pandemic there has been a dramatic divergence between people whose access got a lot unsafer, which is why you have a lot of opioid overdoses, and the people who, maybe by expanded access to these regulated medical markets, got to use drugs in ways that benefited them without any serious harm,” Herzberg says.

And while drug use isn’t synonymous with overdose, it is something public health experts are tracking: 2020 saw more drug overdose deaths than at any point in American history, a 29 percent increase compared to 2019.

“The pandemic was the perfect storm for substance use disorder. It turned ‘functioning drug users’ into non-functioning,” Dave Marlon, a psychotherapist and licensed Drug and Alcohol Counselor, CEO of CrossRoads of Southern Nevada, the largest addiction and rehab center in Nevada, tells Inverse.

Marlon says that a combination of the grief and distress from the pandemic, the government imposed isolation, and the lack of access to healthcare and monitoring caused a rise in opioid overdoses.

“Unfortunately, it’s going to get worse before it gets better,” Marlon says.

He’s hopeful that telehealth can benefit people struggling with addiction — if used extensively enough. “If there’s a silver lining of the pandemic, it’s that, especially the helping professionals, we all learned very quickly to engage in telemedicine,” Marlon tells Inverse.

“I do think this is a reversible trend.”

Shafir thinks that, in the short term, substance use disorders will continue to rise, but this trend does not necessarily have to continue indefinitely as the "new normal".

“Addiction has the highest rate of 'spontaneous remission' — getting better without treatment — than any other chronic health or mental health condition,” Shafir says. “I do believe that this is a reversible trend. Approximately 50 percent of people who develop an addiction end up making a full recovery, and most do so without any treatment.”

Moving forward, it’s hard to predict how our relationships with drugs might change in the next few years. There’s the hope that telemedicine will maintain better access to healthcare, and there’s a reality of the addiction associated with some drugs. It’s most likely mainstream drug use will remain stable, or slightly increased, Herzberg says.

“Plus, if you assume an economic rebound, you should see growth and increase in the use of drugs. Because drugs are part of the economy. They are part of the things that are sold,” Herzberg says.