A tiny discovery in the brain could revolutionize depression diagnoses 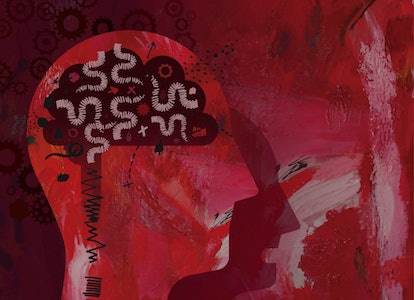 When clinicians typically diagnose depression, they're guided by criteria in the DSM-5, the gold standard guidebook for psychiatry. They ask patients if they have been feeling anxious, hopeless, or unmotivated to get a sense of their mental well being. Then, they can begin the process of treatment.

Now, building on decades of molecular research in the brain, researchers argue for a different diagnostic approach to depression. In a new study, scientists discovered that tiny proteins in the brain called tubulin play a critical role in orchestrating depression.

Overall, the study suggests that tubulin could be a diagnostic marker of depression and a potential target for antidepressant treatment. Zeroing in on tubulin could help clinicians identify who could become clinically depressed — before they show any symptoms.

These findings were published Monday in the Journal of Neuroscience.

About 50 percent of the time depression goes untreated, co-author Mark Rasenick, a researcher at the University of Illinois, Chicago tells Inverse. This is often because people perceive their depression as a personal failure or weakness — not as a mood disorder with neurological roots.

Rasenick has witnessed this misconception time and again over the course of his long career studying depression's roots in the brain. This finding suggests there may be clear biochemical hallmarks of depression, Rasenick says. It tells patients "it's not just in your mind, it's in your brain."

To explore the molecular mechanisms underpinning depression and suicide, Rasenick and his team analyzed brain tissue from the right-hemispheres of 42 deceased individuals, with consent from a family member.

Rasenick's team suspected tubulin levels may be off-kilter in people with depression or those who commit suicide. Previous studies suggest tubulin, and other microtubules, play a role in mood, memory, and consciousness.

Tubulin are small but pivotal proteins in the brain that provide structure to cells and assist in cellular function. They anchor other proteins, called Gαs, to lipid rafts — tiny fatty structures floating in the cell membrane.

In depressed people, Gαs gets stuck in these lipid rafts and cannot trigger the production of cAMP, a molecule necessary for quick messaging in the brain. People with depression have less cAMP in their brains, research shows.

Importantly, when tubulin is modified by adding extra acetyl groups (a naturally occurring process in the brain), Gαs is less likely to get stuck and cause a cascade of negative effects. It's unmodified tubulin that can cause problems.

The team evaluated the collected brain tissue to see if tubulin levels varied based on psychiatric background.

At first, the team discovered all the brains contained the same total amount of modified tubulin. But when they looked a bit closer, they found that the brains of people with depression who died by suicide and those who were depressed but died by other causes had less modified tubulin in the lipid rafts than those without psychiatric illness.

The missing modified tubulin means more Gαs gets stuck in the lipid rafts, preventing cAMP production. The study suggests people with depression may have more total tubulin, but not modified tubulin with extra acetyl groups.

Rasenick is already working on diagnostic tools that would analyze tubulin levels in the brain, or look for other biochemical markers in the blood, through his company, Pax Neuroscience. Down the line, targeting tubulin could also enable more precise, effective treatments beyond currently available antidepressants and treatments, he says.

"What we're trying to do is develop something that can be available as soon as possible, and usable by as many people as possible worldwide, because depression is the leading cause of disability," Rasenick says.

This hope could become reality in less than a decade, Rasenick says — and possibly in only a few years.

Abstract: Cytoskeletal proteins and post-translational modifications play a role in mood disorders. Post- translational modifications of tubulin also alter microtubule dynamics. Furthermore, tubulin interacts closely with Gαs, the G-protein responsible for activation of adenylyl cyclase. Postmortem tissue derived from depressed suicide brain showed increased Gαs in lipid-raft domains compared to normal subjects. Gαs, when ensconced in lipid-rafts, couples less effectively with adenylyl cyclase to produce cAMP and this is reversed by antidepressant treatment. A recent in-vitro study demonstrated that tubulin anchors Gαs to lipid-rafts and that increased tubulin acetylation (due to HDAC-6 inhibition) and antidepressant treatment decreased the proportion of Gαs complexed with tubulin. This suggested that deacetylated-tubulin might be more prevalent in depression. This study, examined tubulin acetylation in whole tissue homogenate, plasma-membrane and lipid-raft membrane domains in tissue from normal control (NC) subjects, depressed suicides and depressed non-suicides (human males/females). While tissue homogenate showed no changes in tubulin acetylation between control, depressed suicides and depressed non-suicides, plasma-membrane associated tubulin showed significant decreases in acetylation from depressed-suicides and depressed-non-suicides compared to controls. No change was seen in expression of the enzymes responsible for tubulin acetylation or deacetylation. These data suggest that during depression, membrane localized tubulin maintains a lower acetylation state, permitting increased sequestration of Gαs in lipid-raft domains, where it is less likely to couple to adenylyl cyclase for cAMP production. Thus, membrane tubulin may play a role in mood disorders which could be exploited for diagnosis and treatment.