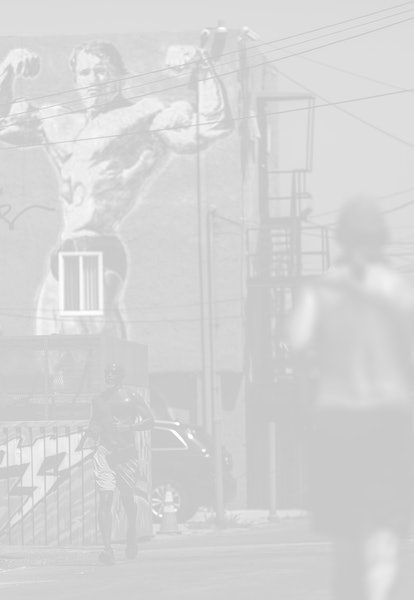 When Kumail Nanjiani landed a role in Marvel’s The Eternals, he immediately knew he wanted to change his body.

He thought to himself, “I’m playing the first South Asian superhero in a Marvel movie. I don’t want to be the schlubby brown guy — I want to look like someone who can hang with Thor and Captain America.”

So he began a grueling workout routine...and developed a distorted view of his image.

Last year, Nanjiani told Men’s Health he believes he was experiencing some body dysmorphia, a mental health disorder in which you can't stop thinking about one or more perceived defects or flaws in your appearance — a flaw that appears minor or can't be seen by others.

“I did start getting some body dysmorphia,” Nanjiani said. “I’d look in the mirror, and I’d see my abs —and when I looked again, they would fade. I would just see the flaws.”

The feelings the comedian and movie star expressed are shared by many who have Muscle Dysmorphia; a type of Body Dysmorphic Disorder characterized by a fixation on the perception that one’s muscles are too small and a preoccupation with becoming more muscular and lean.

“I would just see the flaws.”

Jason Lavender, a clinical psychologist by training and researcher with expertise in body image and eating disorders in boys and men, tells Inverse that MD can stem from impossible societal standards, among other things.

“The male body ideal in our society is both muscular and lean,” Lavender says. “Many individuals with muscle dysmorphia likely would be seeking to have both sides.”

One of the many challenging things about muscle dysmorphia is classification. It’s not an eating disorder, Lavender says, but it can be a symptom of one. It is not a subset of Obsessive Compulsive Disorder, but it’s in the same family. While those technicalities can be confusing, one thing is crystal clear: Muscle Dysmorphia is a serious disorder that’s under-researched and fairly prevalent among young men.

MD can affect anyone, but research suggests men are more likely to experience MD than women. The average age of onset for MD is 19 years old, though it’s most prevalent among men in their mid-20s to mid-30s. People with the MD often turn to unhealthy supplements or even anabolic steroids, just one of the reasons treatment by a mental health professional is so important.

Here’s everything you need to know to understand, diagnose, and start to treat muscle dysmorphia in yourself or someone you know.

What is Muscle Dysmorphia?

How mental disorders are classified is outlined in the Diagnostic and Statistical Manual of Mental Disorders (DSM), the classification and diagnostic tool published by the American Psychiatric Association. The most current edition of the DSM is 5, often referred to as “DSM-5.”

In the DSM-5, Muscle Dysmorphia is called a 'specifier' of Body Dysmorphic Disorder (BDD), says Lavender.

People with Body Dysmorphic Disorder meet four criteria according to the DSM. They are:

With Muscle Dysmorphia, the “flaw” a person is preoccupied with is their muscles' size, specifically that their muscles are too small.

What are the symptoms of Muscle Dysmorphia?

Here’s a non-comprehensive list of symptoms that may reflect Muscle Dysmorphia:

Is Muscle Dysmorphia related to OCD?

Body Dysmorphic Disorder is part of a broader category in the DSM called “Obsessive-Compulsive and Related Disorders." It’s not in and of itself a subset of OCD, but there are some fundamental similarities between OCD and BDD or MD.

Think of it this way: Body Dysmorphia is a cousin of the Obsessive-Compulsive Disorder family. It shares some DNA with OCD, but its closest and most immediate family is its parent: Body Dysmorphic Disorder.

Is Muscle Dysmorphia an eating disorder?

Not technically, says Lavender, though there’s some debate about whether or not it should be.

It’s easy to see why there’s debate: Talk to any bodybuilder (or anyone seriously trying to build muscle), and you’ll hear a lot about diet, most often the importance of eating lots of lean proteins. There’s even a brand of protein supplements called “Muscle Milk.” People who are extremely focused on building muscle are often also preoccupied with what they’re eating. Hence, the debate around MD and eating disorders.

But the bottom line is right now, MD isn’t classified as an eating disorder.

How prevalent is Muscle Dysmorphia in men?

Lavender stresses that more research needs to be done to get a better, more accurate understanding of the different populations affected by the disorder.

Who is most at risk for developing Muscle Dysmorphia?

While the average age of onset may be 19, Lavender says the foundation for developing MD can begin in early adolescence.

“Adolescence or young adulthood is a period of particular risk,” he says. “While we need more evidence, it’s likely that the earlier onset of these behaviors [like counting calories, preoccupation with weightlifting and building muscle] lead to the behaviors becoming more extreme over time.”

Lavender explains that kids who were bullied about being small or not having muscle may be particularly at risk for developing MD.

Ultimately, “We really need more research and information in this area,” he says. “There may be a lot more people out there suffering.”

How did Muscle Dysmorphia become recognized as a problem?

Lavender says the lack of research into MD makes it challenging to know for sure why MD is starting to become more discussed, but he sees three possible contributing factors:

1. It may be that muscularity-focused body dissatisfaction and disordered eating behaviors are becoming more prevalent. People may be more likely to know someone with the disorder, and “personal connections of that sort can ultimately lead to broader recognition,” says Lavender.

2. Social media: Let’s be real— there are an infinite number of ways social media can make you feel shitty or inadequate. Whether it’s the perception that other people have more money, a more exciting life, and/or are more attractive than you, certain apps can really mess with your head.

Social media can also cut the other way, raising awareness about the disorder. He says, “Exposure to idealized body images increases awareness...about the potentially negative effects [of those images], including promoting disordered eating, poor body image, and muscularity concerns like those in muscle dysmorphia,” Lavender says.

People may also use social media to share their own experiences with MD, which he says “may get the word out to broader audiences than in the past.’”

3. Recognition might also be related to people paying more attention to eating disorders and body image more generally among men now than in past decades. “With people recognizing more than men also struggle with disordered eating and body image concerns, that brings with it greater recognition of similar issues that men may struggle with, including muscle dysmorphia,” he explains.

What is the treatment for Muscle Dysmorphia?

“With muscle dysmorphia, there's so little information in sort of the Wild West when it comes to treatment,” Lavender says.

“CBT is also one of the most widely used treatments for eating disorders,” he adds.

If you’re concerned that you might meet the criteria for MD, Lavender suggests finding a mental health professional with experience treating patients with body image issues.

You can also find help through support groups. The Body Dysmorphic Disorder Foundation has online support groups for people who are experiencing any type of BDD.

If you are taking any anabolic steroids, human growth hormones, or other serious performance-enhancing substances, it’s important you don’t abruptly stop taking them but talk to a physician about the best, safest way to wean yourself off of them.

As much as we often like the think of behaviors as either healthy or unhealthy, the frustrating truth is that few things are binary. Strength training and other exercise are healthy until you overdo it or the behavior becomes compulsive, and then it’s not. When we’re in the throes of these behaviors, it can be nearly impossible to see the situation, and yourself, objectively. A mental health professional can help you figure out what’s healthy behavior and what’s unhealthy behavior. They can also help address any other issues you might be experiencing in addition to MD, putting you on a path for a better and brighter future.