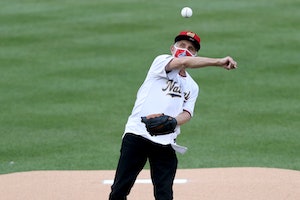 It's almost August and we're still grappling with a pandemic that entered public consciousness in December. Baseball is back, but already in crisis. There's no consensus on reopening schools. Conspiracy theories still flourish.

In the past week, Dr. Anthony Fauci has had his hands full, but it's not all bad. At least his baseball card is still flying off the shelves.

Meanwhile, Fauci's popularity remains strong. So strong that President Trump has acknowledged it publicly. With the country listening, here's what the doctor had to say about the newest twists in America's coronavirus story.

Inverse is aggregating Fauci's comments regularly in the "Fauci Dispatch" series, as the White House has severely limited his visibility to the public.

Fauci on a new trend in coronavirus cases:

In an interview with ABC's Good Morning America, Fauci warned that there are early signs of coronavirus case spikes in Indiana, Ohio, Tennessee, Virginia, and Kentucky.

"That’s a surefire sign that you’ve got to be very careful," Fauci said.

The backdrop: Fauci is basing this statement on one key statistic: the positivity rate of coronavirus cases.

The positivity rate is the percentage of coronavirus tests that come back positive. That number is used to help indicate that the virus may be surging when used in context with other data, like hospitalizations and deaths. It also tells you that the state is doing sufficient testing to capture the full scope of the disease in that area.

The World Health Organization advises that you would want to see a case positivity rate of about 5 percent or lower. Any higher than that, and odds are you may only be testing sick patients, and as Propublica's Caroline Chen adds, missing asymptomatic cases that could contribute to spread. To re-open, states should see the positivity rate stay below 5 percent for at least 14 days.

As of Wednesday, the Johns Hopkins Coronavirus Resource Center reports that 33 states are above that 5 percent threshold. This group includes Tennessee, Virginia, and Kentucky. Fauci has mentioned Ohio as well, but that state has hovered around that 5 percent positivity rate while the others have surpassed it. Those increased positive cases are counter to Southern states where enforced mask-wearing and social distancing have prompted cases to plateau. Debora Birx told reporters on Sunday:

"This current group of states ... are the next set of states where we have significant concerns about the rising test positivity rate and the rising number of cases."

Fauci threw the first pitch on baseball's long-awaited Opening Day. His truly terrible pitch has served as a portend for the way the season has progressed:

"I don’t believe they need to stop, but we need to follow this and see what happens with other teams on a day-by-day basis," Fauci said on Good Morning America.

The backdrop: Within one week, 16 members of the Florida Marlins tested positive for Covid-19. Even after the team was alerted to the fact that three players had tested positive on July 26, the team decided to proceed with their series against the Phillies anyway via group text. So far, no Phillies have tested positive, but it has called the future of baseball into question.

As Marlins' weekend games were called off, The Nationals voted not to travel to Florida to play them anyway. The Marlins won't play this weekend, and the Phillies are sidelined through Friday. Other matchups are still scheduled to proceed.

In reality, it's unclear how long the season will last. But at least we know why Fauci's pitch was so wild: "I thought, ‘Oh, baby, I better put a lot of different oomph into it,'" he told The Wall Street Journal.

In theory, school reopening is only weeks away, in practice, it's been hard to reach a science-backed consensus as to the safest course of action. Speaking to the American Federation of Teachers Fauci shared some bad news:

"In many respects, unfortunately, though this may sound a little scary and harsh, I don't mean it to be that way, is that you're going to be actually part of the experiment, of the learning curve, of what we need to know.”

The backdrop: In a survey, 86 percent of teachers affiliated with the American Federation of Teachers (a union that represents 1.7 million educators, school nurses, and other personnel), said they believed that digital learning was inadequate for students.

Seventy-six percent said they'd be willing to return to school in the fall if certain safety guidelines are put into place. The first step their reopening plan calls for is reducing coronavirus cases (along with adequate testing) for at least 14 days before reopening is even considered.

There have been multiple reopening plans batted around for schools. In New York City studies may return for between one and three days per week, but families can also opt-in to remote learning. But that model may not work everywhere. Dan M. Cooper, a professor of Pediatrics at The University of California Irvine told the New York Times:

"This is really one of the most perplexing and complex issues I’ve ever faced in 40 years."

Schools closed before we truly understood the full scope of the pandemic during the winter. As Fauci notes, teachers may be part of a reopening experiment where results are, at this point, unpredictable.

Fauci on an anti-science trend:

Speaking to Wired, Fauci told reporter Steven Levy that questioning authority figures is part of the "independent spirit of the American people." He also cautioned that the country has taken an anti-science turn:

"Obviously, there is a bit of an anti-science trend in the United States, a pushing back on authority telling you what to do."

The backdrop: There have been countless conspiracy theories surrounding the coronavirus pandemic, and even Fauci himself. Most recently, Sinclair Broadcast Group (the owner of numerous local TV stations) was set to air a segment trumpeting the baseless claim that Fauci himself created the coronavirus.

The segment featured an interview with discredited doctor Judy Mikovits, the researcher behind the conspiracy theory video "Plandemic." That video also contained baseless claims that coronavirus was man-made, and has since been pulled from Facebook and Youtube.

Sinclair decided to pull the segment. The saga is just the latest example of how quickly disinformation has taken root as the pandemic progresses and how it can linger on even after it's been discredited.

It's not always about conspiracy theories either. Just look at how hydroxychloroquine a drug that has consistently shown to have no effect on Covid-19 in clinical trials has continuously been pushed from Twitter up to the highest office in the country.

More like this
Mind and Body
6.30.2022 11:00 AM
Male birth control is at our fingertips. Will we ever grasp it?
By Elana Spivack
Mind and Body
6.27.2022 10:30 AM
What’s the best way to wash your face? Dermatologists explain the science of clean skin
By Katie MacBride
Mind and Body
6.26.2022 2:00 PM
Why scientists think these dietary supplements may help treat depression
By Sarah Sloat
Related Tags
Share: