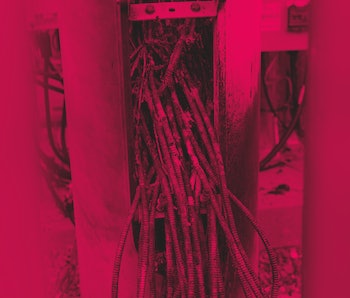 Since last Thursday, more than 20 cell phone towers in the United Kingdom have been vandalized or set on fire. The reasons for it are at once bizarre, extremely big-if-true, and without any evidence. In other words, it's a conspiracy theory. Put on your waders. This is going to get messy.

It all can be traced back to a strange, baseless theory that emerged in February: that 5G wireless networks caused the Covid-19 pandemic. If not that, then that 5G mysteriously hastens the transmission of the virus.

While the arson (more on that below) and threats against telecom engineers literally just working on antennas have been in the UK, claims that 5G can cause harm are not limited to Britain.

YouTube videos like this one posit that Covid-19 quarantines were put into place so the government can secretly install 5G technology. Although they are thoroughly entertaining for their predictable conspiracy video traits -- an authoritative, confident-sounding male narrator acting with a sense of justice, for you, an intelligent, curious skeptic -- the theories in these videos are easy to deflate for those who don't already have a bent to believe.

Celebrities like Woody Harrelson say "the negative effects of 5G" are something worth considering, when talking about coronavirus. Back in the UK, Amanda Holden, best-known as a judge on Britain's Got Talent, shared a link to a petition with her 2 million Twitter followers, calling for more attention to be paid to the idea that 5G is driving Covid-19. The petition and the tweet have been deleted, but not before The Register published this memorable report in its characteristically searing style. There are more: Keri Hilson (read more on that below), "Paper Planes" singer M.I.A., and others, have used their sizable audiences to create panic over something without evidence. The Daily Beast has done the unglamorous chore of documenting the madness.

Why people want to believe — Jay Van Bavel, a social psychologist at New York University, tells Inverse that it comes down to how people handle uncertainty. When times are hard, "people are motivated to find explanations that make sense of things." So, they see patterns that don't exist.

We need someone who is in control, says Anni Sternisko, a social psychology researcher at New York University.

It may be more comforting to have an overarching agent dictating the severity of the virus than to acknowledge the world and humankind are overwhelmed by it, Sternisko tells Inverse.

In turn, if people believe Covid-19 was created by a Deep State conspiracy or telecom companies obsessed with profits before people, it's a problem for everyone. For instance, those people are going to take social distancing less seriously, Ted Goertzel, a retired sociologist at Rutgers University, tells Inverse.

How did the 5G-Covid-19 conspiracy theory start?

The upswell of 5G-coronavirus fears was fueled by a misleading viral YouTube video published on March 12, 2020, featuring a doctor on disciplinary probation named Thomas Cowan. In the video, uploaded by the anti-vaccination group Parents for Healthcare Rights, Cowan links 5G networks to the virus, claiming urban areas hardest hit by Covid-19 also experienced a rollout of 5G technology. This video was debunked, but not before American singer Keri Hilson shared it with 2.3 million followers. Come on, Keri. (The tweet has also been deleted.)

Other videos where Dr. Cowan links 5G to coronavirus have been uploaded and remain on YouTube, despite YouTube's announcement on Sunday that it would remove false 5G-coronavirus theories.

Van Bavel, the NYU psychologist, says these theories appear to be a situation where "people confused correlation for causation."

Why do people believe the 5G-Covid-19 theory?

There is no scientific basis connecting 5G wireless networks to Covid-19. 5G is the newest generation of wireless networks, claiming to be speedier and more efficient than past iterations. Like previous wireless networks like 3G and 4G LTE, 5G transmits via radio waves, a non-harmful part of the electromagnetic spectrum.

There are no two ways about it: 5G is confusing, and that confusion creates uncertainty. And with uncertainty comes... conspiracy theories. By the way, Inverse made a video last year explaining 5G. Here goes:

If the 5G-coronavirus connection has zero evidence, why do people still believe it? Sternisko says that the problem largely lies with the fact that conspiracy theories are quick to spread and hard to undo.

"Once someone has planted the seed of a conspiracy theory, it is really hard to take this idea away and people really struggle with intervening," Sternisko says.

Conspiracy theories appeal to people for a variety of reasons. Van Bavel reasons that "people often want someone or some group to blame," while Goertzel observes that when frightened people look for an explanation they often "grasp at something that comes along." Or, they're angry and are looking for a target for their anger.

There is also the social aspect of conspiracy theories. Sternisko, the social psychology researcher NYU, notes that the feeling of uniting over a common cause can draw people into conspiracy movements. The idea that you really know the truth also helps people feel "special and unique."

People also create conspiracy theories with various aims, says Goertzel, the retired sociologist from Rutgers University. Some people want attention, celebrity, and clicks, he says. Others want to advance their political career or influence public opinion. Many want to make a buck, profiting off uncertainty with fraudulent products.

"I think every group that has a cause to promote will jump on this," Goertzel says. He cautions people to look out for pandemic profiteers.

How does this theory affect public health? — In a global health crisis, conspiracy theories take on a dangerous edge as people search the web and social media for information to protect their health and safety.

If people think the coronavirus isn't a real or severe threat, linking Covid-19 symptoms to the phone masts, all the policies to combat the spread are "pointless," Sternisko says.

Half of Americans believe in at least one conspiracy theory. This isn't exactly a fringe phenomenon in the United States.

People should still be motivated to ask questions — Despite the distraction of conspiracy theories like this one, the public should still be critical of circulating narratives, including those from authorities, Sternisko adds. But remember this: While something may sound compelling, that doesn't mean that it is true.

Goertzel, who in 2011 published this excellent analysis of theories called "The Conspiracy Meme" in Skeptical Inquirer, offers this advice to anyone who wants to believe:

"People have to stop and take a few minutes to really think something through."