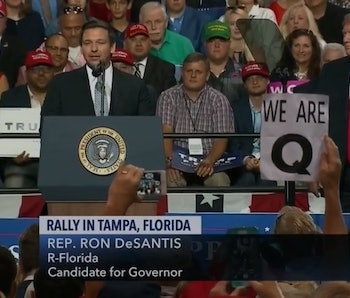 Want to know more? That’s what we’re here for.

Mainstream media attention truly focused in on QAnon as journalists familiar with the conspiracy noticed an outcropping of signs like “We Are Q” and shirts with the YouTube logo encircled by the letter Q at Trump Tampa, Florida “Make America Great Again” rally on July 31. Not only are QAnon proponents publicly advertising the conspiracy on live TV, but Trump is known to believe debunked conspiracy theories (especially about his Democratic political opponents), endorse them onstage, and share them on social media. If QAnon shows up on Trump’s doorstep, it isn’t a reach to think he might goad theorists into action and further disseminate dangerous falsehoods.

On June 15, those falsehoods had equally dangerous consequences. A man armed with an AR-15 assault rifle drove an armored vehicle to the Hoover Dam and blocked traffic for almost two hours to demand that the Justice Department “release the OIG report” that QAnon conspiracists believe exists as a second, secret follow-up to the initial Hillary Clinton private email server investigation.

What Do ‘QAnon’ Followers Believe?

At the center of the conspiracy is “Q,” an anonymous poster to internet forums like 4chan who claims to possess a top-level security clearance and evidence of a worldwide criminal network. “Q” started posting in October 2017, and his theory goes a little something like this:

Robert Mueller was never appointed to investigate Trump’s collusion with Russia. Rather, Trump is using Mueller to investigate Barack Obama, Hillary Clinton, and other core members of the Democratic party — but also Republicans like Sen. John McCain — for their own ties to Vladimir Putin, and for their potential involvement in a global pedophilia ring. The same line of thinking that spawned #PizzaGate.

The nuances of “Q’”s intel include that said Democratic party leaders are secretly wearing location-tracking ankle monitors, and in the oncoming “storm” that Trump has allegedly referenced in meetings with military leaders, they’ll all be sentenced to prison. The theory hinges on Trump being the instigator of the movement, encouraged by the US military to clean up the Democrats’ global criminal network.

The actual content of Q’s “crumbs” that the account “drops” for its followers is mostly unhinged ranting about the building momentum of alt-right values: denouncing fake news, exposing liberal hypocrisy, and fighting back against the alleged censorship and oppression of overwhelmingly white, male political views. That, with a dose of heaping concern for the imagined child victims of the Obamas, Clintons, and Podestas of the world.

How Did ‘QAnon’ Happen?

As a refresher, #PizzaGate was a thoroughly debunked alt-right conspiracy that developed after WikiLeaks made Clinton’s campaign manager John Podesta’s emails available to the public. Conspiracists believe the emails contained coded messages revealing a human trafficking operation within the Democratic Party that included an alleged child-sex ring in Washington, D.C. pizza restaurant Comet Ping Pong. It resulted in a North Carolina man firing a rifle inside the restaurant, and numerous death threats issued against owners and staff.

#PizzaGate was born on sites like Reddit and 4chan, text and image-based forums with distinctly categorized subcultures. But both sites have pushed back on QAnon, so conspiracists have fled to lesser known forums, like 8chan, Voat, and Discord, an app for gamers to chat with one another. There, on /pol/ discussion boards (the sub stands for politically incorrect), Q’s followers discuss the user’s cryptic posts. (Browse at your own risk.)

As with any internet trend, the bandwagon effect and the targeting of insecure populations has allowed QAnon to grow from a laughable online conspiracy theory to a physical trending movement with real-life consequences. White House Press Secretary Sarah Huckabee Sanders denounced “any group that would incite violence against another individual” after the QAnon presence at Trump’s Florida rally, but didn’t call out the conspiracy by name.

For more on how QAnon will influence American constituents and politics on a broader scale, only time and Trump’s tweets will tell.