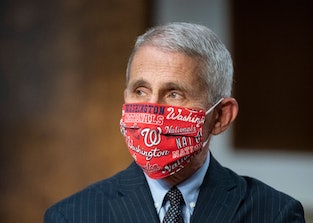 Dr. Anthony Fauci is the director of the National Institute of Allergy and Infectious diseases. But even he can't secure an invitation to the White House's newly reinstated coronavirus-related briefings.

Still, he's been far from silent as the coronavirus news cycle continues to churn.

Here's what Fauci had to say in the past week as coronavirus cases surge (particularly amongst young people), three new vaccine candidates advance, and the President accuses him of being "a little bit alarmist."

As a public service, Inverse is aggregating Fauci's comments regularly in the "Fauci Dispatch" series, as the White House has severely limited his visibility to the public.

Fauci on the end of the pandemic:

In an interview with TB Alliance on July 22, Fauci warned that the coronavirus isn't going anywhere anytime soon.

"I don’t really see us eradicating it."

The Backdrop: Fauci is correct in that we will likely be able to control the coronavirus, but not totally eradicate it. However, it's important to remember that eradication has a very specific scientific definition: eradication means that the disease's prevalence has been reduced to zero. That has only been achieved twice in the history of humanity: for smallpox and for rinderpest virus.

Realistically, many diseases that have been widely controlled, like polio, or measles (prior to 2019, anyway) are eliminated from specific geographic regions. That doesn't require the complete extinction of all cases around the world, rather it means driving those of a specific region to zero.

What part of the Covid-19 pandemic do you think causes the most confusion? We want to know. Take the Inverse reader survey

In short, odds are we won't eradicate coronavirus, but going after that is a stretch anyway. What we can do is control its spread through vaccination, masks, and social distancing.

Fauci on who is "fueling the pandemic:"

In a Tuesday New York Times interview, Fauci nodded to a surge in nationwide coronavirus cases, and emphasized the role that younger people are playing in spreading the illness.

"They are fueling the pandemic."

"They are fueling the pandemic," Fauci said of younger Americans. "We have to keep hammering that home, because, as much as they do that, they’re completely relinquishing their societal responsibility."

The backdrop: Fauci told The New York Times that the average of new coronavirus cases in the South tend to be "10 to 15 years younger" than what we have seen previously. Just look at Florida: median age of cases in March was 65. Between July 8 and July 21, it has ranged from 38 to 42.

Not all young people are negligent about social distancing (those who work certain jobs that require face-to-face interaction can only do so much). However, his pinpoint of societal responsibility is also particularly timely.

A recent survey of 770 teenagers found that 68.6 percent didn't adhere to "pure social distancing" in March as the pandemic surged the first time – that trait was correlated with traits like self-interestedness. Feelings of "social responsibility" tends to track with adherence to social distancing rules, the research team found.

Fauci on being called "a little bit alarmist:"

In an interview on Fox News Sunday President Trump said he has a "very good relationship" with Fauci, before plunging into a different characterization of the doctor: "He's a little bit of an alarmist -- that's OK," the President said.

"I consider myself more a realist than an alarmist."

In an appearance on CNN Fauci responded to the President's comment: "I consider myself more a realist than an alarmist," he said.

The Backdrop: Despite the President's assertion that the two have a "very good relationship" Fauci and President Trump had not met for much of June nor had he briefed the President directly, as the Financial Times reported on July 10. That streak ended July 15 when the two had a phone conversation.

There is increasing speculation that the White House has tried to discredit Fauci. In a statement to CNN, a White House official said that officials were "concerned about the number of times Dr. Fauci has been wrong on things."

That sentiment came to a head in an op-ed in USA Today written by Peter Navarro, The White House Trade advisor, in which Navarro said Fauci has been "wrong about everything I have interacted with him on." Trump has since distanced himself from Navarro's comments.

Fauci on concerns that the U.S. will struggle to roll out a coronavirus vaccine:

"We don’t think that’s going to happen, for the simple reason that the federal government has invested billions of dollars directly — directly — into the pharmaceutical companies that are making the vaccine," Fauci told The New York Times on Tuesday.

The Backdrop: In July, three coronavirus vaccine candidates have been shown to cause immune responses in humans – a hopeful sign that they may protect against the coronavirus. All three trials will now progress to phase III clinical trials, the third and largest scale of human testing, which will reveal if these vaccines can actually prevent the coronavirus in real life settings.

But even if we have a vaccine that works, there's still considerable concern about the United States' ability to roll out a vaccine

The precedent isn't great after shortages of personal protective equipment hit the United States in March (in some states shortages are still a problem). Fauci though, provides a more optimistic outlook, suggesting that the financial investments already made will spur greater attention to vaccine rollout.

Moderna Inc's vaccine effort received $483 million in federal relief money to accelerate their vaccine candidate. By comparison, when the US was facing widespread mask shortages in April and March, the federal government was still arguing against the use of masks for the general public.

Fauci on the link between bars and coronavirus spread:

Speaking to In Style Fauci argued that we may need to roll back reopening as coronavirus cases surge – with a specific emphasis on closing bars.

"I think we can stop that by just closing them, because they are certainly an important mechanism of this spread," Fauci said.

The Backdrop: Anecdotal evidence spells bad news for bars and coronavirus. The day after bars reopened at half capacity in some Florida counties, 16 friends returned home with Covid-19 after one night (seven bar employees also tested positive), the Miami Herald reports.

That's not because bars are especially grody, but perhaps a mixture of the fact that indoor congregation, and being drunk form a perfect Covid-19 storm. For instance, pubs reopened in England this month the Police Federation Chairman John Apter said that it was "crystal clear" that drunk people are bad at social distancing.

More like this
Mind and Body
6.15.2022 7:51 PM
A single gene could stump a deadly parasitic infection
By Allison Parshall
Mind and Body
6.27.2022 10:30 AM
What’s the best way to wash your face? Dermatologists explain the science of clean skin
By Katie MacBride
Mind and Body
6.25.2022 3:00 PM
What makes eggs organic? A USDA expert cracks open the complicated answer
By Elana Spivack
Related Tags
Share: