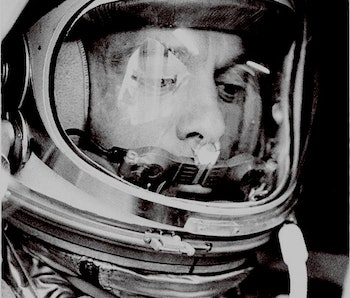 On this day 60 years ago, Commander Alan Shepard made history by becoming the first American to travel to space and back.

A decade before he surreptitiously took 200 silver medallions into space, Shepard made that record-breaking trip (despite, well, not having a bathroom). While we are eyeing a Mars helicopter today, we can’t forget about the sheer audacity required to strap one’s self to a literal missile on May 5, 1961.

Shepard flew inside the Mercury spacecraft, launched on a NASA Redstone rocket — first used as a missile by the U.S. Army — and took the trip to 116 miles above Earth. The entire thing lasted fewer than 16 minutes.

It was just the beginning for Shepard. In February 1971, he walked on the Moon — becoming the fifth to do so — and famously played a little Moon golf as commander of the Apollo 14 mission. That first trip 60 years ago, though, was prefaced by Shepard's selection as one of 110 test pilots asked to volunteer for NASA's fledgling spaceflight program.

When he died in 1998 at age 74, Shepard could claim a number of memorable observations from his time in space, but this one is a personal favorite:

“I realized up there that our planet is not infinite. It's fragile. That may not be obvious to a lot of folks, and it's tough that people are fighting each other here on Earth instead of trying to get together and live on this planet. We look pretty vulnerable in the darkness of space.”

Blue Origin, the aerospace firm started by Amazon founder Jeff Bezos, will reportedly announce prices for seats on its New Shepard rocket booster today. It’s an appropriate date to announce airfare for private citizens — the anniversary of that first flight by Shepard, the rocket’s namesake.

I’m Nick Lucchesi, editor-in-chief at Inverse, and this is Inverse Daily. Let’s dive into some essential science and innovation stories from our reporters.

This is an adapted version of the Inverse Daily newsletter for May 5, 2021. Subscribe for free and earn rewards for reading every day in your inbox.

Is this the “gate of consciousness?” — Because we can’t possibly absorb every single stimulus, our brain lets some signals filter through to our consciousness. But as Katie MacBride wonders, where in the brain does that take place?

The brain is constantly sorting through an endless barrage of sensory stimuli. In the same five minutes, you could be navigating your way through a crush of pedestrians while calling the office, picking up your dog’s doo-doo, and keeping an eye on that driver who’s sure to blow through a stop sign.

Because we can’t possibly absorb every single stimulus, our brain lets some of these signals filter through to our consciousness while others don’t.

But where specifically in the brain does that filtering take place? If somewhere in the brain exists the gateway to consciousness, which part of the brain functions as the gatekeeper?

All about the 2021 Ford Mustang Mach-E — Ford's first four-door Mustang is a galloping electric pony that has impressed critics with its pleasing design and stirring performance. Here's everything you need to know, from Jordan Golson:

Many have waited for the Ford Mustang of electric vehicles: an affordable and exciting electric car. It turns out that wait was rewarded with an even better get: an actual electric Mustang.

The Mach-E is a car of firsts. After 56 years, this is the first four-door, the first electric, and the first all-wheel-drive Mustang. It’s available in varying different trims with several options for battery sizes, drivetrains, power, and more.

Here’s everything you need to know.

Why China “just not caring” is a problem for space — China's Long March 5B rocket is spinning uncontrollably toward Earth, with pieces of its core stage expected to hit the ground, reports Passant Rabie:

Jonathan McDowell, an astrophysicist who tracks space debris when he’s not studying distant quasars, has been trying to determine why he’s so unhappy about China’s Long March 5B rocket.

“As a physicist, I like to quantify things,” McDowell tells Inverse.

The 22.5 metric ton Long March 5B is expected to make an uncontrolled reentry into Earth’s atmosphere within the next couple of days, with some of its debris possibly landing on inhabited areas. The incident will make it one of the largest spacecraft to reenter uncontrollably into the atmosphere, and it could have been avoided.

McDowell, of the Harvard-Smithsonian Center for Astrophysics, has drawn one big conclusion: “They’re deliberately just not caring and leaving it to re-enter.”

If you look at the smudged skylines of Los Angeles, California, or Beijing, China, the haziness creates the illusion of cities shrouded in perpetual gray. That smog is driven by a pollutant that doesn’t just ruin the view; it worms its way into the brain, influencing the health of exposed people.

In a new study, scientists find another reason why air pollution is bad for the brain — this time zeroing in on the effect it has on men’s brain health. The study examines the negative effect of fine particulate matter, also known as PM 2.5 pollution. You might know it as black carbon or “soot.”

Let me know what you think of this daily dispatch by emailing newsletter@inverse.com. You can follow me on Twitter at @nicklucchesi, where I share some of my favorite stories from Inverse every day.