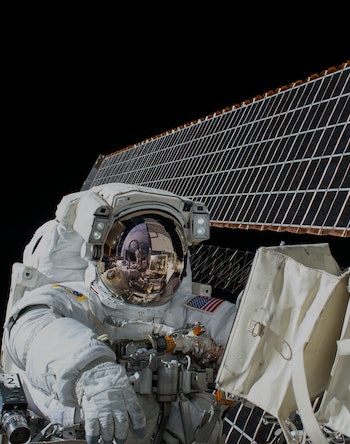 Let’s be clear about one thing: astronauts are often remarkable human beings who live with huge risks to advance our collective understanding of the universe. But they are still human, and some of them have had some real facepalm moments while they were out in space.

Most of the issues have come from items astronauts packed in their personal flight kits — un-inventoried bags that allow astronauts to take personal tokens into space without having to declare them to the public. Some of these items became public because of a prank or scandal. Sometimes astronauts forget that even though they’re making large steps for humankind, they are still government employees. These are the ten most WTF moments from our greatest heroes.

It would be careless to start this list without returning to the fact that cosmonauts have been recommended to drink cognac to stimulate their immune system and keep themselves toned. Aleksandr Lazutkin, who was onboard Mir in 1997, mentioned that after a particularly hair-raising incident where a supply module hit the station and caused a leak, the crew took to drinking. NASA does not approve, and alcohol isn’t allowed on the International Space Station.

Even astronauts can have issues with authority. During his flight on the International Space Station in 2007, Clayton Anderson got a reputation for being a problem child. He had a tendency to point out when Mission Control was asking him to do things that he thought were clearly inefficient. He wrote in a Quora post, “Their expectation was that I do everything they say — without question — and keep my big mouth shut!” Anderson was put in astronaut time-out to think about his crimes until he was called back to the majors in 2010.

Ken Mattingly lost his wedding ring in space. On just the second day of the Apollo 16 mission, the whole crew searched the module for days, they went to the moon, they were heading back – the ring never turned up on the module. Right before they were scheduled to leave orbit and return to Earth, Mattingly went on a final space walk with Charlie Duke. Duke noticed the tiny gold band floating alongside them. He tried to grab it, and the ring floated farther away, hit the back of Mattingly’s head and bounced back where Duke caught it. Now that’s a wingman.

National hero Alan Shepard, aka the First American in Space, belongs on this list for instigating the astronaut souvenir smuggling ring. Luckily for his crew, he was too famous to get in trouble for it. He was the commander on the Apollo 14 mission in January 1971 that took 200 silver medallions into space in a financial agreement to sell space with Franklin Mint in Philadelphia. With Shepard on board, NASA smoothed it over, but the Apollo 15 crew wouldn’t be able to get away with this kind of tomfoolery.

What do you smuggle on your Apollo mission if you’re trying to be as cool as Alan “big shot” Shepard? Stamps. Yep, David Scott, James Irwin, and Alfred Worden smuggled 400 stamps onto Apollo 15 to sell at a tidy profit. You can’t blame these guys, as salaries for astronauts had decreased by 1971, and they were just trying to fit in — but NASA didn’t see it that way when the stamps went on the market right after they landed in July. The true crime of the Apollo 15 crew is that they didn’t realize they were Shepard’s fall guys. It’s like watching a bunch of freshmen get busted for smoking behind the high school while the senior quarterback lights up next to them.

John Young will go down in history for having the most infamous lunch in the history of space travel. On March 23, 1965, Young pulled a two-day old corned beef sandwich out of his pocket to munch on during the flight. Apparently it smelled terrible and was super crumbly, which could have damaged equipment on the Gemini 3 mission (but it didn’t.) NASA wasn’t amused; especially ‘cause the whole point of the mission was to try out the new space food — oops.

Featuring vomit and the silent treatment, Skylab 3 was the space mission equivalent to a frat party. While heading up to the American space station on November 16, 1973, William Pogue felt nauseous from the journey and vomited — which wasn’t that unusual during space acclimation but would worry the medical director. So Carr and Gibson only told mission control Pogue was feeling sick, and didn’t say he’d thrown up. NASA mission control was recording the cabin and discovered the vomit the next day. Needless to say, they were pretty mad about not being told about the party foul.

After a very stressful and overworked month and a half, the astronauts were struggling. Carr told NASA, “We would never work 16 hours a day for 84 straight days on the ground, and we should not be expected to do it here in space.” NASA told them to suck it up and stay on schedule. On December 28, they decided things had to change and Carr turned off the radio to NASA. For 24 hours, Skylab was silent and mission control couldn’t do anything about it. After the radio went back on, ground control realized they had to chill and the relationship improved, but Pogue, Carr, and Gibson never made it back to space. NASA did learn something about keeping astronauts happy though, so way to take one for the team.