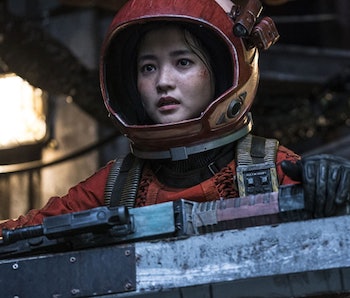 It’s the year 2092 and things are looking pretty bleak. Planet Earth is no longer habitable, so humans have voyaged to outer space in order to make a living — and survive.

Roving bands of gangs viciously fight over scraps of space junk, barely scraping by as they earn a few hundred bucks here and there for tons of space metal. It’s a dark parable of hypercapitalism run amok in the wilds of the cosmos.

Luckily this is not our reality — at least, not yet. This is the dystopian setting for the sci-fi film, Space Sweepers. Originally titled Seungriho, it’s Korea’s first big space blockbuster and it’s streaming on Netflix now.

However, what might be even scarier than the grim premise: it’s not that far off from reality. Space Sweepers shines a spotlight on a very real, very scary issue that has NASA sweating: space junk.

Also known as space trash, space debris, or orbital debris, space junk is a huge problem with no easy solution. Two experts tell Inverse why — and what we should do next to prepare.

The trailer for Space Sweepers.

What is space junk?

“International space organizations typically define orbital debris or space junk, as any object designed for use in outer space, whether still in space or returning to Earth to the atmosphere that does not serve a designated purpose,” Lisa Ruth Rand, the Haas postdoctoral fellow at the Science History Institute in Philadelphia, tells Inverse.

It’s a pretty broad term, Rand explains, encompassing anything from large objects to debris barely visible to the naked eye. Some of the more common types of space trash include:

If you’ve ever watched the movie October Sky, you’ll know there’s an iconic scene where Homer sees Sputnik — the world’s first artificial satellite launched by the Soviet Union — and becomes deeply inspired by the satellite moving across the night sky.

Many IRL onlookers also reported seeing Sputnik soar through the sky on October 4, 1957 — though you’d probably have needed a good pair of binoculars to spot it instead of looking with your naked eyes since it was only the size of a beach ball.

It’s a moving scene in the film, but we’re here to burst your bubble: what most people saw on the night of the launch wasn’t actually Sputnik. It was space trash.

“Well, the funny thing is, that wasn't Sputnik — it was the rocket body that launched Sputnik into orbit,” Rand says.

“That’s the first object which was simultaneously the first spacecraft and the first piece of space junk.”

Why is space trash a problem?

The existence of Sputnik’s rocket as space trash raises an important point: we’ve known about the issue of space trash for decades.

NASA established an Orbital Debris Program Office in 1979 to tackle the problem and created this astonishing graphic in 1989 to record the mounting problem.

Jonathan McDowell is an astrophysicist at the Center for Astrophysics at Harvard and the Smithsonian. McDowell tells Inverse that there are now some 16,000 actively tracked space debris objects. The U.S Air Force and Space Force actively track this kind of larger debris.

However, NASA suggests there are likely hundreds of thousands of marble-sized space trash floating around Earth’s orbit — and possibly hundreds of millions of debris particles smaller than 1 millimeter.

The biggest problem with space trash: collisions. Space debris travels at speeds reaching up to 18,000 miles per hour — seven times faster than a bullet, according to NASA. McDowell puts it bluntly: “If it hits you, it's gonna hurt.”

Naturally, any collisions between objects traveling at such high speeds will produce even more trash.

For example, in 2020 two huge pieces of space junk nearly collided and both were owned by the two of the world’s most powerful nations: Russia and China. And just last week a piece of space debris whizzed past the International Space Station, causing the crew to jump into protective spacesuits just in case there was a collision.

It’s such a big problem that the European Space Agency convenes an annual conference to discuss space trash solutions.

NASA animation from 2014 depicting the distribution and movement of space trash.

McDowell tells Inverse space trash is mostly confined to our galaxy, so the good news is we’re not littering other worlds just yet.

But it’s still a big issue for Earth, as space trash could fall and potentially injure people and infrastructure. Russia’s remote Altai region is infamous for its “space graveyard,” where locals plunder fallen space parts for profit. Reports have also emerged in recent years of health problems emerging from space trash falling in the area.

Who is responsible for space junk?

In short: no one and everyone. Most specifically, each individual nation-state is responsible for cleaning up its own outer space trash.

“Right now, most interpretations of the Outer Space Treaty say that if you know if you have a Russian piece of space junk, only the Russians have permission to do anything about it,” McDowell says.

As such, there are few — if any — regulations on space trash.

“Under the Outer Space Treaty, all activities in space, have to be sponsored by a country. And so commercial satellite has to be licensed by a particular country, and there are no international regulations, per se, on space debris,” McDowell says.

McDowell stresses the need for greater international regulation of space trash, perhaps through an extension of the United Nations’ Committee on the Peaceful Uses of Outer Space.

According to Rand, space trash isn’t necessarily just trash, but could also be seen as cultural artifacts — like Sputnik’s rocket body. If one country removes another country’s space trash that could theoretically be considered an act of military aggression, she says — potentially inciting a war over space.

How do we remove space junk?

There are two main ways to solve the space debris issue, according to Rand: mitigation and removal.

Mitigation is the act of reducing space debris so it isn’t an issue in the first place, similar to reducing greenhouse gas emissions on Earth.

Removal involves taking the debris out of space by different means, such as sending a spacecraft to attach to a piece of trash and either “bring it back to Earth, or bring back to the atmosphere, where it's where it's where it falls apart during reentry,” Rand says.

There are a few more out-of-the-box proposals involving space lasers to melt space trash, but those are pretty far-fetched, according to McDowell.

However, removal gets complicated depending on where in space the trash is located, according to McDowell. Objects below 600 kilometers from Earth’s atmosphere will eventually get broken up into smaller pieces and fall to Earth within 25 years. Objects as low as 300 kilometers will come down within weeks.

But further above Earth’s atmosphere — specifically, between 600 and 2000 kilometers — “the density of the Earth's atmosphere is so thin that stuff is going to stay out for at least decades and usually centuries.”

And that’s the trash we need to remove before it’s too late.

The problems with space debris removal

Space debris removal is at the heart of Space Sweepers. In the movie, individuals on the margins of society fight to collect tons of metal scraps, getting meager payments in return for this deadly work of removing debris from space.

But in reality, there are two primary issues with space trash removal. The first is legal. McDowell suggests that the international community come together to solve this interstellar problem.

“At some point, the International Space community, and the country the major countries involved are going to have to recognize that they need to do something about this,” McDowell says.

The second is financial. McDowell suggests that nation-states begin taxing satellite companies to fund space debris removal, because otherwise, “who's gonna pay for it?”

However, there’s another solution involving fleets from private companies creating space garbage companies to collect junk — which is not too different from the private ships collecting space junk in Space Sweepers.

In fact, the European Space Agency has already launched a $102 million deal with Swiss start-up company ClearSpace SA to bring space trash back to Earth in 2025. American companies may soon begin expanding into the space garbage arena too.

“There's a company called Space Logistics that's a subsidiary of Northrop Grumman, that is docking too old satellites and extending their lives, but it wouldn't be a big stretch to have them turn that technology into junk removal,” McDowell says.

Will we one day see Elon Musk or Musk-like entrepreneurs take on space trash?

“I think it's not only possible, it's almost inevitable,” McDowell says.

Musk’s company, SpaceX, has launched a reusable rocket program to meet the costly demands of their space flights. At first glance, these reusable rockets, like Falcon 9, could help reduce the amount of space debris that the company emits into outer space.

Yet, Starlink — Musk’s attempt to rapidly expand high-speed Internet access through SpaceX satellites — has faced mounting concerns over its failed satellites, which are adding to the space debris problem.

Considering both the junk produced by SpaceX and the risk of collisions between space debris and SpaceX aircrafts, it’s almost certain that Musk and other billionaires like Jeff Bezos will launch space debris removal programs.

There’s certainly money to be made in the endeavor. We can look to Space Sweepers for a potential model, wherein the main character delivers several hundred kilograms of trash to a waste management satellite, receiving only $534 while the satellite company presumably sweeps up the majority of profits.

But launching private fleets into space to clear up trash raises other concerns.

That’s not the case in Space Sweepers, where a poor junk collector must pay thousands of dollars out of pocket to fix a satellite that their spacecraft broke.

Rand adds that “these kinds of private companies have a new form of power and ability to operate outside of that kind of regulatory framework” beyond the older space governance norms from the Cold War era.

That’s alarming because while these private actors still need to adhere to FCC regulations, they are not necessarily bound by the same space governance norms as nation-states, creating a ripe opportunity for a lawless Wild West to emerge in space.

The future of Space Trash — “Private companies have always been involved in the space industry — that's not new — but the kind of the startup model where individuals have outsized power right like Elon Musk and Jeff Bezos right, that is a bit of a shift. It's a pretty big shift,” Rand says.

So, maybe we won’t all be living in outer space anytime soon, but the roving bands of private space junk collectors in Space Sweepers? That might just come sooner than you think.

Space Sweepers is available for streaming on Netflix now.