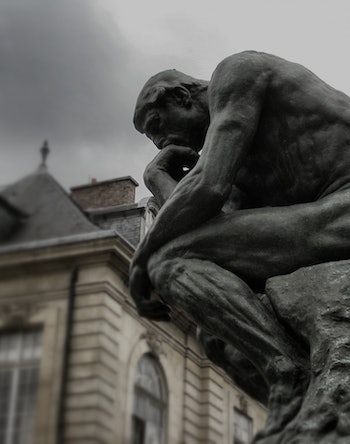 Two papers released Wednesday in Neuron delve deep into the way we perceive the world, revealing that we don’t actually register much of it. Our attention systems, the authors show, are extremely ill-equipped for modern society. Rather than take in the world in a constant stream of information, consciousness oscillates in and out of focus, meaning that what we think we know about the world has actually just been pieced together from limited information. Their estimates of how often we are actually focused suggest we don’t know much about the world at all.

The findings are as much philosophical as they are scientific — enough to call into question our most basic understanding of reality into question. Both studies — one on humans by a team at the University of California Berkeley, and another on macaques done by scientists at Princeton University — sought to pin down how many times the human brain oscillates in and out of focus per minute. Four times every second, explains Princeton Neuroscience Institute Ian Fiebelkorn, Ph.D., to Inverse, the brain stops focusing on the task at hand. That’s about 240 times a minute.

“The brain is wired to be somewhat distractible.”

“The brain is wired to be somewhat distractible,” he says. “We focus in bursts, and between those bursts we have these periods of distractibility, that’s when the brain seems to check in on the rest of the environment outside to see if there’s something important going on elsewhere. These rhythms are affecting our behavior all the time.”

To understand these “rhythms of attention,” Fiebelkorn suggests imagining standing in Times Square on New Years’ Eve, surrounded by people, cars, and music. The scene presents far more sensory information than one human brain is capable of sorting through, and so, the brain deals with all of the information in two ways. First, it focuses on a single point of interest: the street corner where you might meet a friend, or Ryan Seacrest combing the crowd for interviews. Like a filmstrip, the brain takes snapshots of these moments and pieces them together into a cohesive narrative, or “perceptual cycle.”

We experience that moment as continuous, but in reality, we’ve only sampled certain elements of the environment around us. It feels continuous because our brains have filled in the gaps for us, explains Berkeley’s Knight Lab researcher and first author Randolph Helfrich, Ph.D. to Inverse.

“I think it’s more a philosophical problem that it is a scientific problem,” he says. “Because when we look at brain data we see a pattern that waxes and wanes, they’re never constant and stable. Everyone perceives the world as continuous and coherent, but the real tricky part is, how does the brain do that?”

The teams behind both studies analyzed data from both human and macaque brains during a series of tasks to understand how the brain stitches together a coherent narrative when it’s only got snapshots to work with. The reason why we experience reality as a movie when it’s only a collection of pictures can be at least partially explained by our rhythms of attention. About four times every second, the brain stops taking snapshots of individual points of focus — like your friend on the corner in Times Square — and collects background information about the environment. Without you knowing it, the brain absorbs the sound of the crowd, the feeling of the freezing December air — which it later uses to stitch together a narrative of the complete Times Square Experience.

“I think it’s more a philosophical problem that it is a scientific problem.”

The Advantage of a Distractible Brain

Modern society tends to think of distractibility as a bad thing, Fiebelkorn says, but it might have offered early humans and our distant ancestors a huge evolutionary advantage. The brain’s natural tendency to “zoom out” and become distracted by the environment, even for just a few milliseconds, could have allowed them the time to detect the presence of a threat and react accordingly.

“Say you spot a shiny red apple in a tree and you focus on that,” Fiebelkorn says. “You’re going to go and pick that apple, but you’ll want to know if there’s any larger animal with bigger teeth going after the same apple. So, having these windows of distractibility helps you to detect these stimuli you might otherwise miss.”

The findings of these two papers in conjunction are powerful evidence that these rhythms are highly adaptive and have been preserved in humans and their relative species for millions of years. This hypothesis is based on the fact that the teams noticed nearly identical neural patterns of attention (the “rhythms of distractability”) in both the humans and macaques. For a trait to still be so similar in species that diverged from a common ancestor billions of years ago, it very likely must provide a useful evolutionary advantage that has been preserved by natural selection.

But modern society, Randolph adds, has thrown a wrench into our ancient rhythms, because modern life demands that we perform all sorts of hyper-focused tasks. We perform cutting-edge scientific research, we write articles, we drive cars at high speeds on the freeway. All of these things requite intense focus, and in these cases, our distractible brains become a liability.

“Think about trying to do three things at a time. You’re trying to drive, you have coffee, you’re on the phone, and all of the sudden this means that you’re the constant switching between those things. If you drop your attention, that is enough to cause an accident,” says Randolph. “Everyone is running on an attentional system that was established way before we were even the human race, so we have this really old school system that’s not as adaptive as we’d like it to be.”

Human attention is a precious commodity. Companies shell thousands of dollars for a billboard ad commuters speed by at 80 miles per hour or pay to have their name plastered on the side of a sports area in hopes that fans will catch a glimpse of their logo during a free throw. Given the neural data produced by these studies, this is actually a wise move. No matter how much you love the New York Knicks, the brain takes note of that Geico sign behind the bench in the lulls between its more focused moments.

“It’s the core of what makes us human somehow.”

“It’s certainly something you could see advertisers taking advantage of,” Fiebelkorn says. “Four times a second, there’s a window where you’re open to stimuli outside your initial focus. It doesn’t mean you’re going to shift your attention but if there’s something there: something very bright or blinking then in that case you would shift your attention. So it is possible, if you’re on the internet and there are ads popping up, that’s something they could take advantage of.”

Advertising aside, this research makes it clear that while humans spend so much time in search of hyper-focus, it’s likely an unachievable goal. Thousands of years of the struggle for survival have wired us to be distracted. Maybe it’s time to embrace it as a fundamental part of life. Helfrich certainly thinks it is: “It’s the core of what makes us human somehow.”