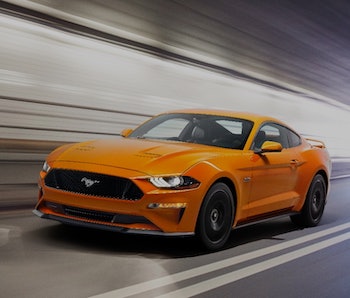 Ford released the new 2018 Mustang today, and boy, are some things different. For the first time, the standard model won’t be available with a V6 engine, but just because the automaker is ditching the V6 in favor of more efficient, eco-friendly engines, doesn’t mean you can’t pay a little more for the GT version and really let the entire neighborhood know that they’re cruising down the streets.

The 2018 Mustang GT has a full V8 engine and even better, features an optional active exhaust that lets drivers increase or decrease the volume of their engines to really pump that classic “I’m driving a powerful car” engine roar. Forbes reports that the GT’s active exhaust goes beyond the dual-mode systems featured in some cars that just switch from “quiet” to “loud” with hard acceleration. Instead, the 2018 Mustang’s active exhaust is “continually variable” for a more gradual, natural roar emanating from the car’s quad tail-pipes. Previously, this feature was only available on the Shelby GT350 and Camaro SS.

The volume of the car isn’t the most important thing about it, though (unless you’re a real asshole). Ford also released a bunch of additional details about the new Mustang. The ride will be available with a 2.3-liter EcoBoost four-cylinder and 5.0-liter V8 in the GT, which boasts that active exhaust system. Both have increased horsepower and torque, though Ford hasn’t revealed any specific figures on that end yet.

The late V6 engine was included in the Mustang’s 2015 lineup as the paired-down option compared to the surprisingly more powerful and efficient four-cylinder EcoBoost engine. Most of those V6 Mustangs ended up in rental car fleets, so it’s not a huge loss — especially since Ford’s making sure that Mustangs still have the ability to be loud as all hell.

More like this
Innovation
6.29.2022 6:00 PM
Can cars run on water? The science of a TikTok conspiracy theory, explained
By Andrew Moseman
Innovation
6.24.2022 5:00 AM
Beam-steering radio technology could help autonomous cars finally hit the road
By Sascha Brodsky
Innovation
19 hours ago
Robots are ready to get touchy-feely
By Sarah Wells
Related Tags
Share: