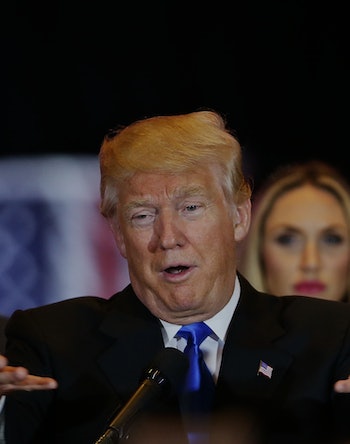 Few things are agreed upon in American politics, but one fact is universally understood: Donald Trump is an asshole. Clearly, assholery does not preclude political success in this country; in fact, it may guarantee a certain number of delegates. One could argue — though a political scientist might demure — it is now inevitable that an asshole will inhabit the White House in 2017. One could probably further argue that an asshole always has.

This is why the University of California-Irvine’s Aaron James, Ph.D., thinks it’s crucial we begin to understand assholes as a species independent from dickheads, jerks, and shitheels. The philosophy professor and author of Assholes: A Theory and its follow-up, Assholes: A Theory of Donald Trump, released this month, believes the most realistic approach Americans can take to the upcoming election is not to dismiss assholes, but to manage them. He talked to Inverse about why the Republican Party can’t control Trump, yoga culture isn’t immune to assholery, and, yes, Hillary Clinton is probably an asshole, too.

What’s your definition of an asshole?

So, pretty much Donald Trump.

There’s different kinds of assholes, depending on what kind of entitlement they think they have. And Trump is interesting because, for him, it’s nothing very substantial. He thinks he’s the greatest, he’s the winner, so he should keep winning. It’s what I call a thin sense of entitlement. It’s a newer asshole style, compared to, an older, more grandiose, maybe cosmic sense of doing God’s work in the name of assholery or for serving a political cause. It’s hard for us to wrap our minds around the idea that he can really think that gives him a kind of moral justification — a kind of privilege — to be rude, to interrupt and insult people and break all kinds of rules of propriety. But that’s that’s what he does. I think it’s a moral sense of entitlement in the sense that he feels morally indignant when people complain and if he’s not willing to even entertain the idea that the complaint has merit.

Relative to other kinds of assholes, is that type more difficult to manage?

They’re all difficult to manage, but maybe, yes, because the assholes who succeed in life well enough to stay assholes — those for whom it works — have to be successful in navigating the gray areas of cooperative life. These are people who don’t just go through a teenage phase of being an asshole and then grow out of it. The people who never grow up are the ones that figured out how to work around those gray areas to evade accountability, and so all people who become successful as functioning assholes are difficult to manage because they, by definition, are able to avoid accountability. They’ve figured out all the techniques for shutting people down when they complain. With some, you can figure out what will isolate them or anticipate their strategy, but others are more wily, like Trump. There just really isn’t anybody who could can successfully get him under under control. Certainly not within the Republican Party.

Do certain cultural conditions make it easier for an asshole like Trump to succeed?

There will always be assholes because there will always be grey areas of social cooperative life that people can exploit. But depending on the underlying culture, you can have more or fewer assholes. The culture can help create or dampen the production of assholes. Take Japanese culture, which is much more cohesive and has a strong ethos of cooperation and tolerance towards assholes. There are some assholes there, but far fewer, relative to the size of the population than the United States, or Italy, or Brazil.

It’s not that cultures are a fixed thing, either: It might be that in the United States there are more assholes than there used to be because in our newer style of capitalism, there is the “greed is good” ethos, the idea that winners should take all and are entitled to what they get in the market. In this case, it would be a political market: The political entrepreneur who can wrangle enough votes by exploiting animosity and creating resentments and can motivate people is seen as being a winner, politically. And then you’re entitled to get the Republican nomination because you have done that.

As our political culture has degraded an ongoing basis, it’s become possible for him to take advantage of it. In some sense, his rise reflects the low and degraded state of politics. He’s a clown that shows what you might have thought was a dignified occasion to, in fact, be the circus.

How much do gender politics play in creating a culture that allows assholes to proliferate? Is the “war on men” really just be a war on assholes?

It might be — I mean, assholes are mainly men. There are some asshole women — I think that’s possible and actual in some cases — but it just turns out to be the case that the culture that helps facilitate assholery tend to be oriented around ideas of manliness or masculinity, being able to take privileges, or not being expected to be sensitive to other people’s interests or concerns. A “boys will be boys” type of culture. That doesn’t always create assholes, but it does create more of them on the male side of the sex divide. It’s not a surprise that a lot of the conspicuous assholes that rise often do so by exploiting ideas of manliness and by overtly using sexist tactics against women to try to maintain a position of dominance.

Can Hillary Clinton be seen as an asshole?

Absolutely. A lot of the right and maybe a lot of the right center believe that she is an asshole. They fear she’s opportunistic, bending important boundaries out of concern for her own power, that her claims to serve the public good are just rhetoric, and that she’s really seeking power and money. I think she’s easily misunderstood. I don’t think she has necessarily responded to those problems in the best way, although, speaking as a man, I can say I don’t know what it’s like to be subject to that impossible set of options. So I think that’s a big part of understanding her, but at the same time I think there’s lots of elements of truth to saying that she’s blurred important boundaries and exploited gray areas in money in politics in the way that is certainly reflective of the larger form of corruption. She certainly hasn’t spearheaded the charge against cutting out the influence of money in politics.

Will social movements ever make it an acceptable to be an asshole?

This speaks to the point that any social structure can create them. Take yoga culture, for example. You might think that’s the quintessentially anti-asshole culture, but yet you have Vikram, who’s famously an asshole, for lots of reasons. So even there, you have the best of circumstances for not having assholes, and you get a few. In some sense they are part of the human social condition. It’s a fact of life, and it’s something that we have to learn how to manage, and it’s important not to overreact to that fact either. We can’t have constant asshole police forces. There’s going to be too much arbitrariness and too many injustices and catching up of mere jerks or innocent people who are just having a really bad week. There are a lot of reasons why we shouldn’t try to just completely eliminate assholes from our culture — but just contain or manage them.

At this rate, we’re going to have an asshole president one way or another. What advice would you give the average American for dealing with it?

In Trump’s case, it’s clear that his cause is himself and he cares about his country because it’s associated with him. He wants to make America great again, but it’s not totally clear what that means in his eyes short of him being elevated in power, status, and feeding his own vanity.