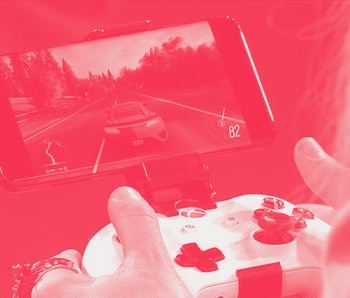 Google Stadia may have stumbled off the starting line, but cloud gaming isn't dead yet. Last year, Microsoft introduced Project xCloud, a streaming service allowing mobile gamers to play Xbox games on their mobile device. At E3 2019 in June, Xbox head Phil Spencer explained the service "turns your Xbox One into your own personal and free xCloud server. Whether you’re using a console in our data center of your console at home, this October, you’ll be able to use our hybrid gaming cloud to play your games wherever you go.”

The service is currently in beta on iOS and Android, and there's some bonafide classics in the bunch. There are more than 50 titles available for Android devices, but only the Halo Master Chief Collection on iOS. Best of all? They're totally free. Here's 10 of the best picks for Android gamers.

From 2001 to 2010, Halo was synonymous with gaming itself. Those who followed Master Chief’s exploits did so every single day through the various multiplayer modes, like Fireteam Co-op. The Master Chief Collection includes every title released during Halo’s heyday, from Combat Evolved to Reach.

You could pay $39.99 for this bundle of space-shooter goodness on Steam, like a chump. Or you could play it on your phone for free like a boss.

Mash together Princess Mononoke’s gorgeous woodlands with Metroidvania aesthetics, and you'll get Ori and the Blind Forest. The tranquil 2D-platformer has secrets hidden around every corner. The world is as explorable as it is delightful. Even after beating the game, you’ll want to remain in the world via its lovely soundtrack.The xCloud version is packed with nifty features like customizable difficulty settings and fast travel. Play Ori if you’d like a strong case for video games as art.

Perhaps we’re a little biased. Since it launched, Inverse has loved Subnautica. Perhaps it’s because Subnautica is so chill and contemplative. It's low on combat, with a focus on exploration and building. (Imagine if Minecraft had a great flood.) Subnautica implores you to dive down into the ocean's lowest depths, tackling all the various scary parts of deep-sea exploration, while adding its own flair.

There are hundreds of fictitious species in Subnautica, although you might occasionally recognize a few traits from real sea creatures. Explore your heart out and discover what Subnautica has to offer.

If you've got fond memories of SimCity or spend a lot of time thinking how your own hometown could be even better, Cities: Skylines has you covered. Taxes, construction, zoning, employment, all of your favorite metropolitan bureaucracies are now in your hand. As the Xbox One Edition, this copy will also come with the first expansion, After Dark, free of charge.

If your connection isn’t great, xCloud can be a little difficult to enjoy on action-heavy games, making Cities: Skylines the perfect game for those playing a little slower.

It’s been 14 years since gaming’s only third-person shooter franchise with meaty soldiers debuted, making it the perfect time to revisit the title that started it all. Over 18 months, the development team rebuilt the original game, bringing it up to snuff with its modern Gears contemporaries. They only retained select elements from the original like the score and voice acting. This new, polished Gears of War is a superb third-person shooter with a compelling sci-fi tale, focusing on the war between humans and the underground Locust species.

Even if you’ve played the first game already, there are oodles of new things to enjoy. The developers added in a few characters, who weren’t originally introduced until later in the franchise, better connecting the series. When you’re done, check out Gears 5, which is also available on xCloud.

Inside and out, Hellblade is a masterpiece. You play as Senua, a Norse warrior looking for the wayward soul of her recently deceased lover. Along the way, you’ll fight massive foes in a third-person action setting crafted by Ninja Theory (developers of 2013's Devil May Cry and Heavenly Sword).

There's more to the story than just combat, though. Senua grapples with mental health problems throughout her journey, which can manifest as solvable puzzles or imagining voices. Her psychosis was depicted so intensely that multiple science journals have praised the game's handling of these issues.

4. Hitman - Game of the Year Edition

In this third-person shooter, you play as Agent 47, a veteran assassin who travels across the globe. You’ll always get the job done, by any means necessary. This might mean you use a disguise like a Santa Suit or you’ll simply throw a coin to distract a few people, but you’ll get the job done. Hopefully, nobody will notice or you’ll be in a world of trouble.

This edition of the game will provide over seven episodes filled with the most creative killing techniques you’ve ever imagined. Oh, and costumes, lots of costumes.

Yohohoho, it’s the pirate’s life for you – in an online setting that has nothing to do with torrenting. You can be your very own take on Captain Hook or Long John Silver, and everything is yours for the taking. You can steal from other players or team up with three other folks to pillage nearby vessels.

If you liked the seabound ship combat found in Black Flag, you’ll love Sea of Thieves. This game has arguably the best ocean combat in recent memory.

2. Bloodstained: Ritual of the Night

Years ago, Koji Igarashi created the gothic sidescroller Castlevania, which would go on to become a Netflix series and 50 percent of gaming’s favorite portmanteau, Metroidvania. Spurred on by numerous fan requests to return to his roots, Igarashi created Bloodstained. The hardcore platformer emulates the best parts of his Castlevania work while including still some good ‘ol labyrinthine castle exploration.

10.The Wolf Among Us

The Wolf Among Us stands head and shoulders above the rest of Telltale's numerous point-and-click games. With the developer’s recent revival, we can’t wait for Season 2. If you have yet to play Season 1, this is the perfect xCloud experience

You play as Bigby Wolf, the Sheriff of Fabletown, a New York neighborhood occupied by various fairy tale characters. It’s your job to keep the peace, but that becomes a bit difficult when a murder occurs. As you get to the bottom of it, you’ll meet all sorts of characters from classic bedtime stories. They might not always be what you expected.