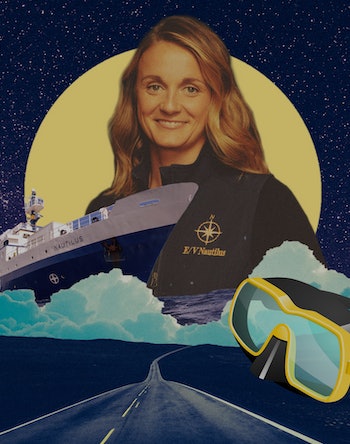 Even if you live in the most landlocked area, the ocean impacts your everyday life through the air you breathe, climate regulation, trade and commerce, and perhaps by ingredients in products you use and the food you eat. The ocean is also an important part of human history and of the culture and heritage for many people.

Despite the fact that every single 7.53 billion of us living on this beautiful planet are affected by the ocean in some way, we as a global community are abysmally failing at properly managing and protecting it. With increasing pressures on ocean health — including climate change, seafloor mining and drilling, overfishing, invasive species, and pollution — we are at a critical point where we are teetering on the edge of irreversibly endangering the most critical support system of our planet.

Is there hope? Yes.

So then, why can’t we get our act together?

See also: Allison Fundis is America’s best hope for the protecting our oceans

To begin with, the ocean is Earth’s largest ecosystem and we still have a fairly rudimentary understanding of its biodiversity, how its ecosystems interact with one another, and how our activities in turn impact these ecosystems from the atmosphere to its greatest depth at nearly 7-miles deep.

From the tiny plants called phytoplankton that provide over half of the oxygen we all breathe, to the majestic blue whales, to organisms that thrive at the deep sea vents where 400º celsius seawater jets out of the seafloor, we have learned a great deal in modern oceanography’s relatively young life.

Yet, it has been estimated that at least one-third of species that inhabit the world’s ocean (excluding microbes) may remain completely unknown to science. There are a lot more out there waiting to be discovered.

Additionally, the ocean plays an important role in telling the story of modern human history as a host to millions of shipwrecks and some of the most elusive mysteries of our time like the final resting place of Amelia Earhart’s Lockheed Electra and Shakelton’s Endurance. These are sites that, when discovered, need to be honored and protected as to preserve their historical significance, especially in the case of those that also mark the final resting place for the souls that were aboard.

At a time when technological advances are happening at unprecedented rates, we are starting to make a dent in these knowledge gaps and discoveries but we have still only visually observed less than 10 percent of the seafloor (not to mention the ~352 quintillion gallons of ocean above it!) and we have mapped less than 15 percent of it at high resolution. In short, we have better maps of the surface of Mars and the moon than we do our own seafloor and approximately 70 percent of our planet.

We have better maps of the surface of Mars and the moon than we do our own seafloor and approximately 70 percent of our planet.

The ocean is also one global entity and although we may draw geopolitical borders and boundaries on maps and charts, the water and everything that lives within it moves freely without regard to those lines. In order to properly manage, monitor, conserve, use, and make projections for the future of the ocean, we have to — collaboratively on a global scale — continue to build our fundamental understanding of what lives within it and how the unnumbered marine ecosystems and those on land are interconnected. This is where ocean exploration plays an important role.

Ocean exploration is critical for making informed resource management and policy decisions as well as the stewardship of our oceans, economy, and health of the planet. Through the use of ships, submersibles, autonomous vehicles, cutting-edge mapping systems, advancements in genetic sequencing (e.g., eDNA), machine learning, and new technologies, we are making great progress towards advancing the observations we can make in the deep sea as well as the rate at which we do it.

By investing in our continued pursuit of exploring Earth’s inner space and innovating new ways to explore efficiently and economically, the more we will understand how the ocean affects us in all aspects of our daily lives. Equally important, is engaging the public and next generation as we do this so that they, too, can make connections with the ocean and understand its significance to their everyday lives, issues that they may vote on, policies they may write, and maybe even their future career choices.

We have a lot work to do, together. We all have a stake in this.

Allison Fundis is a member of the Inverse Future 50, a group of 50 people who will be forces of good in the 2020s.

See also: Allison Fundis is America’s best hope for the protecting our oceans

You can follow Allison Fundis’ adventures here and tune into Expedition Amelia on Sunday, October 20, 2019 on the National Geographic Channel.