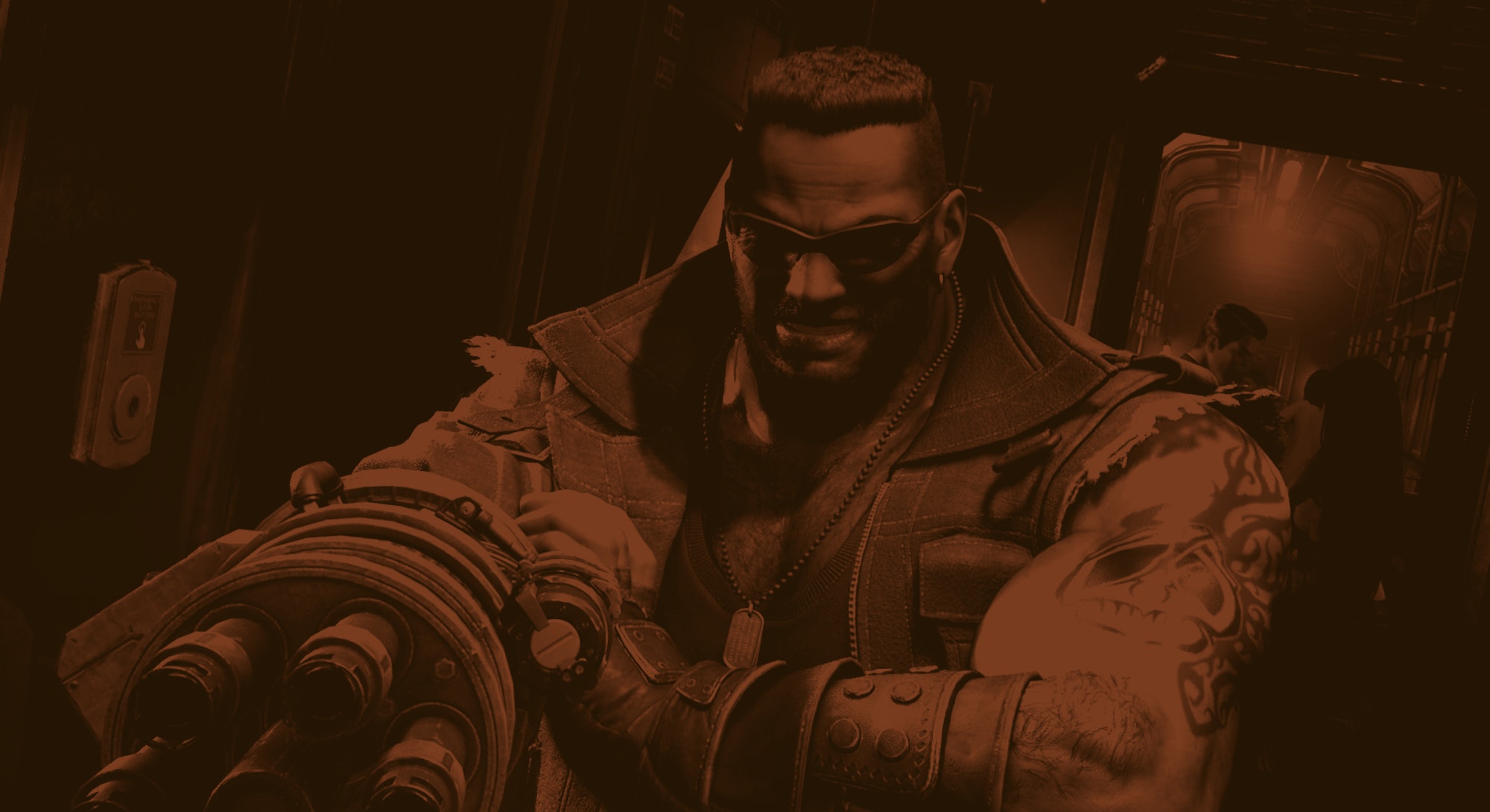 Since their inception in the early 20th century, tanks have been iron-clade mobile fortresses busts through frontlines to carve a path for infantry.

80 years later, “tanks” have become as fundamental in role-playing video games as they are on the battlefield. In the process, it’s changed the way we think about the word itself.

RPGs like Final Fantasy VII Remake (released for PlayStation 4 on April 10) typically feature characters whose primary objective is to get absolutely pummeled by enemies so their teammates don’t have to. In Final Fantasy 7, that’s Barret.

The sunglasses-sporting strong-man doesn’t exactly fit the traditional image of a shield-carrying tank from classic RPGs but his main job is to gain the attention of enemies so the protagonist, Cloud, can worry less about trying to stay alive and more about swinging his oversized Buster Sword. Equipped with a gatling gun arm and formidable defensive stats, Barret is another iteration of a video game character archetype that’s been referred to as a “tank” since the early 1990s, and one that the Final Fantasy from Japanese studio Square Enix series helped advance in the 2000s.

Tanks pride themselves on their survivability, which is made possible by large health pools, the strength to equip heavy armor, or the ability to dodge enemy attacks. They’re typically burly warriors, knights, or paladins that most likely gained their nickname from their big muscles. They tend to be decked out in battle-worn steel, like a living tanker.

As early as 1992, gamers dubbed this beefy character class as “tanks” on Usenet, a virtual bulletin board that was the precursor to popular internet forums like Reddit. Back then, text-based fantasy games that mimicked board games, like Dungeons & Dragons, were all the rage.

BatMUD was one such title that was released in 1990 and had amassed a fanbase of about 100,000 players by 2006. Day-one players of the game referred to the Warrior class as “tanks” and “BigGuyWithHPS” in multiple Usenet threads dating back to 1994. One user by the name Nguyen Anh D Le was trying to get his warrior to immediately jump in front of enemies whenever there was an enemy encounter by writing a few quick lines of code (games were a lot less complicated back then):

BatMUD and other text-based MUDs (multiplayer real-time virtual worlds) were the building blocks for today’s MMORPGs (massively-multiplayer role-playing games) that would carry over many of these “tank” concepts. BatMUD even included a warrior skill called “rescue” that would instantly make an enemy begin attacking the warrior instead of another player. It was the precursor to the bread-and-butter warrior ability, Taunt, in World of Warcraft.

But before WoW took the world by storm in 2004, Final Fantasy XI: Online would shape two distinct styles of tanking that influenced many games that followed. The 2002 MMORPG from Square Enix gave tank players the option to be either “Blood Tanks” or “Blink Tanks.” (Both of these monikers were made up by players to refer to different classes in the game and how they most effectively tanked damaged.)

Blood Tanks were primarily Paladins and could be described as “meat-shields,” meaning they relied on enormous reserves of health points to soak up attacks that would knock out another character in one hit. A Blink Tank’s job, on the other hand, was to take pressure off Blood Tanks so they weren’t overwhelmed; in FFXI, that meant ninjas who could distract the enemy and evade damage.

Video games released in the wake of FFXI each had their own spin on unique tank classes. World of Warcraft has six, the massively popular space-based game EVE Online (2003) has two main tank classes, and Warhammer Online (2008) has three. Every RPG, whether massive and online or a single-player experience, had some kind of big-boned brawler. The term became so common other games started using it to describe beefy characters even if they weren’t technically “tanking.”

The rise of “multiplayer online battle arenas” games like League of Legends (2009) led to another deviation in the meaning of “tank.” These games use the term to describe resilient, melee champions that specialize in crowd control. Meanwhile, tanks in team-based shooters like Overwatch (2016) specialize in protecting their teammates and disrupting the enemy.

What began as a niche nickname on MUD with a couple of thousand of users became a term that crosses all video game genres. Tanks are now a core part of every WoW raid group, Overwatch competitive squad, and FF7 Remake boss battle.

Every gamer needs a Barret to their Cloud.