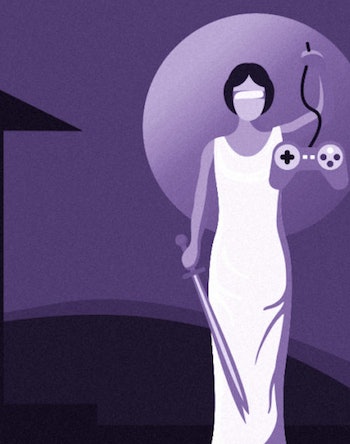 The rules of a popular online video game fundamentally change more times in a single year than most traditional sports change in an entire lifetime. Professional baseball’s rules have altered just 32 times in 142 years, while the latest League of Legends patch introduced about as many changes. Two weeks earlier, the previous patch contained even more.

Games like League, Overwatch, and Fortnite are constantly in flux because of their vibrant competitive scenes. Developers constantly monitor and test for unexpected and exploitable tricks legions of gamers might use to their advantage. (It’s a bit like if the weight of a regulation baseball changed every time players figured out how to hit a home run.)

Anyone waded into the online forums of their favorite video game has likely encountered fans begging developers to “PLS NERF” a character they think is too strong or complaining about a buff that they believe made an enemy nearly unbeatable.

It’s a cycle game-makers have been dealing with for more than two decades, and the exploding popularity of DLC content and games as services have made nerfing and buffing more common than ever.

But the terms nerfing and buffing were coined in the early days of the internet, largely thanks to the early massively multiplayer online role-playing games (MMORPG) Ultima Online.

The origins of nerfing

Ultima Online (UO) was developed by Origin Systems and released by Electronic Arts in 1997. Back then, only about 18 percent of households in the United States had internet access, according to the U.S. Census Bureau. That didn’t stop medieval fantasy MMORPGs like Meridian 59 (1996) and Nexus: The Kingdom of the Winds (1996) from developing lively, online communities. But it would be UO fans who would thrust the world “nerf” into mainstream gamer parlance.

UO was far from balanced when it first launched. Developers rigorously test their titles before sending them into the wild, but there’s only so much a studio can account for in the limited time afforded by video game production — and there’s no predicting how players will actually wield a new character or game mechanic once it's out in the wild.

Before online games and regular patches became the norm, developers had to release completely new versions of the game to implement changes. Street Fighter 3 (1997), for example, was followed by two updates released as standalone titles. So UO lead producer Richard Garriott and his team had to scramble to adapt to a new era of game balancing.

“It was very broken upon launch,” Garriott told IGN in 2017, explaining that his team was “scrambling to catch up with stuff. We realize that people are both really upset and really passionate about being there. If they were upset enough they could just quit and go away, they cared. They were in the game protesting in the game.”

“Players started complaining that they were hitting each other with Nerf swords.”

Thousands of UO players quickly discovered swords were far stronger than any other weapon. This led many to exclusively use blades, meaning everyone else either had to try to fight back with their inferior bows, staffs, and axes or give in and grab a sword.

The development team weakened swords in response. From then on, players began comparing UO’s swords to foam Nerf toys and the rest is history.

“For the record, the term ‘nerfing’ entered online gaming vocabulary because of UO,” lead developer Raph Koster wrote in his personal blog. “Players started complaining that they were hitting each other with Nerf swords.”

The term was quickly adopted as a shorthand for making an item, character, or ability weaker in any game, and has been typed in countless online forums since. It first appeared in The New York Times in 2002 in an interview with Gaute Godager. He’s the lead developer of the sci-fi MMORPG Anarchy Online, which shares some of the credit for popularizing the antithesis of nerfed in gaming culture, “buff.”

The origins of buffing

The history of buffed to describe something becoming more powerful isn’t quite so cut and dry. But, once again, it was MMORPGs that took it from a niche term used in pen-and-paper role-playing games to a ubiquitous gaming expression.

Multiple users on the Gaming Stack Exchange forum said they were first introduced to world playing games like Anarchy Online and Everquest in the late 1990s and early 2000s. But buff had a slightly different meaning back then.

Instead of being used to describe overall balance changes, it was primarily used to describe temporary enhancements to players’ offensive or defensive capabilities. The opposite of buff in this context is “debuff,” which is literally a curse or harmful spell used to slow enemies or deal damage over time.

“There was a low-level spell which would increase the strength stat. When the spell was applied, there was an icon of a big, bulging bicep on your screen,” wrote Gaming Stack Exchange user user170066. “Some players said ‘I will buff you up’ or some reference like that while casting it in the first weeks since the game's release… I heard debuff when referring to spells which lowered something's fighting stats.”

Both of these definitions are rooted in pen-and-paper RPGs, like Dungeons and Dragons. Spellcasting classes use buffs to boost their next attack or heal their teammates. The term is widely seen as a play on buff’s original slang definition: To be muscular.

Since buff was already associated with temporary enhancements, using it to describe more permanent improvements naturally followed. Anarchy Online players used the newer definition of buff online as early as 2001, but there doesn’t seem to be a singular event that caused the word to be adopted by gamers quite like nerfed.

Still, both terms were born out of the need for a succinct way to describe the constant balance changes of competitive online games. So the next time your favorite Overwatch hero gets nerfed or the buffs to your main on League of Legend are disappointing, spare a thought for the old-school gamers who had to buy a brand new disc or cartridge to get those kinds of updates.