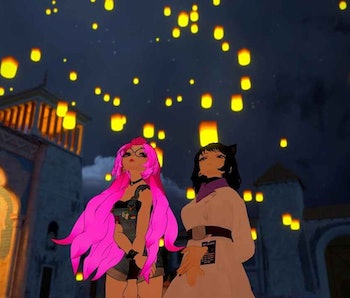 “Metaverse” is a virtually ubiquitous buzzword nowadays. With Meta, née Facebook, and other tech companies pushing the benefits of Web 3.0 and the metaverse, very few of us actually comprehend what that digitized future actually looks like. But for users of VRChat, the metaverse is already part of their everyday lives — and it’s only getting better

HBO’s new documentary We Met In Virtual Reality introduces viewers to a cast of characters who represent the ideal of what the metaverse can offer, yet it makes glaring omissions about the issues plaguing the platform. For the uninitiated, the film is a kind portrayal of how humans build relationships in tough times, but We Met In Virtual Reality fails to fully engage with the full spectrum of digital life.

We Met In Virtual Reality begins in 2020, with a world fully in the midst of a global pandemic. What better time to try out virtual reality?

Over the course of the HBO documentary, we are introduced to a small group of people who use virtual reality as an escape during the pandemic. Dust Bunny is a dancer who teaches lessons in VRChat while also maintaining a relationship with her partner Toaster. Characters IsYourBoi and DragonHeart plan their in-game wedding. Then there’s Jenny and Rey who work to teach sign language in virtual reality to make the space more accessible. Director Joe Hunting shot the film entirely in VRChat, one of the most popular VR games around. The ambitious film immerses the viewer into this world and effectively conveys why these players are so invested in what it has to offer.

Much like the 2021 animated film Belle, We Met in Virtual Reality’s main interest in the digital world is how it gives people an escape from real life. But while Belle fails to acknowledge the value of living a digital double life, We Met in Virtual Reality almost exclusively revels in the joy of building relationships in VR. Rather than focus on individual characters, three main stories play out that focus on pairs of players and what VRChat has meant for their relationship (romantic or not).

While each story helps make the case for how the metaverse can help people in a myriad of ways, the heart of We Met In Virtual Reality is the story of Jenny and Rey.

They help run a digital school for sign language in VRChat called Helping Hands. Jenny shares how being a part of this community made her realize there were people in the world who she cared for and who cared about her in return, something that helped her recover from a previous suicide attempt. Rey is a deaf player who communicates through American Sign Language (ASL) in VRChat, something that has allowed him to make friends in the metaverse at a time when he was dealing with the death of his brother.

In one of the documentary’s most touching scenes, Rey and Jenny light a lantern for Rey’s brother in VRChat and send it into the sky as Rey says goodbye. The tangible emotions that come across in moments like this are enough to bring tears to my eyes. It’s a testament to the fact that despite its absurd aesthetics, the virtual world can offer genuine human connection and emotion.

A glitch in the matrix

As a film aimed at those unfamiliar with virtual reality, We Met In Virtual Reality succeeds. Most people will come away thinking that VRChat is a little weird but filled with kindness. In many ways, the 91-minute film is a perfect advertisement for the metaverse promises made by tech companies like Meta. Yet the film never engages with the many issues that are actively facing VRChat, a fact that makes the film’s attempt to be immersive feel more voyeuristic and detached from its subjects than intended.

The plethora of anime cat girls, furries, and pop culture characters like Kermit the Frog are never given an explanation. There is an inherent absurdity to this that feels akin to how Ready Player One was full of cameos from every entertainment franchise possible. But while some people might come in expecting to see the promise of a virtual future, they might come away disappointed by the prominence of glitchy character models and animation that persists throughout the documentary.

Despite these flaws, virtual reality still seems like a freeing space, something that only rings true for independent projects like VRChat.

The future of the metaverse as envisioned by big tech is filled with regulation, censorship, and monetization. The current state of VRChat represents an early internet-like state, one on the edge of being ruined by corporate intrusion. Those who use VRChat are currently worried the game will change irreparably with the announcement that it will soon include Epic Games’ Easy Anti Cheat software. This would make all third-party software incompatible with the game. For players with accessibility issues like Rey, this would mean necessary accessibility features would disappear overnight.

We Met in Virtual Reality portrays VRChat as a very accepting community, one that welcomes anybody. This is hopeful at best and deceptive at worst. VRChat does have incredible communities within its wider universe, as the spotlighted players show, but it also has a rampant problem with racism and other problematic behavior. The documentary chooses to prioritize the stories of people without giving much-needed context. A necessary companion piece to this documentary is a People Make Games video that investigates and explains the cultural workings of VRChat and the uncertain future the game faces.

While We Met in Virtual Reality does not fully engage with the complexities of its subject, the deeply emotional stories that are depicted make the case for the benefits of a virtual world. It may be an overly hopeful view, but sometimes hope is what the world (virtual or real) needs.

We Met In Virtual Reality is available to stream on HBO Max.

More like this
Gaming
8.11.2022 4:49 PM
Everything we know about Sonic 3
By Willa Rowe
Gaming
10 hours ago
GTA 6 leak indicates the return of an abandoned GTA V concept
By Joseph Yaden
Gaming
13 hours ago
Here's exactly when you can start playing Madden NFL 23
By Jess Reyes
Related Tags
Share: