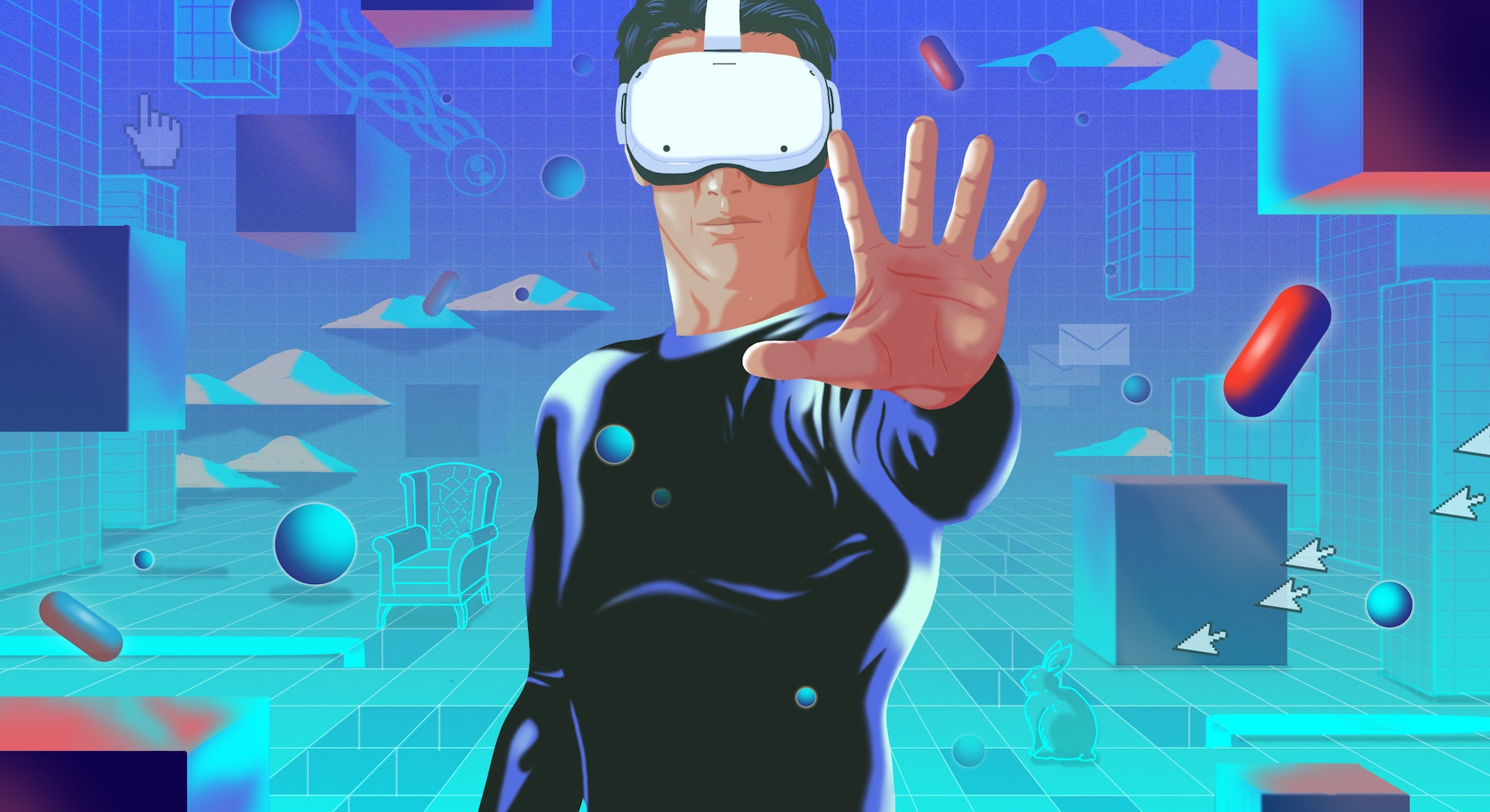 In his thought experiment, scientists can stimulate an individual’s brain with happy experiences indistinguishable from experiences in the “real” world. Nozick then asked a provocative question: If given a choice, would we choose the machine over reality? He concluded that we wouldn’t, arguing it's better to experience the highs and lows of this world than to experience the artificial, never-ending high of the simulated.

In 1999, The Matrix posed a similar question: Red pill or blue pill? Simulation or reality? With the release of The Matrix Resurrections plugging Neo (Keanu Reeves) back into a simulated reality, it seems appropriate to ask what similarities could exist between the Matrix and the Metaverse. It turns out there are quite a few.

It’s important to define exactly what the metaverse is. A portmanteau of “meta” (meaning beyond) and “universe” (exactly what you think it means), the concept originated almost 30 years ago in Neal Stephenson’s dystopian novel Snow Crash. As pitched today, it sounds more like the interactive world of Ready Player One.

The metaverse will be an embodied internet where, according to Mark Zuckerberg, “you are in the experience, not just looking at it.” Of course, one has to ask if Facebook (which changed its name to Meta in October) is really the best company to build the next chapter of the internet. Many, including whistleblowers, would argue absolutely not, but that isn’t stopping Facebook from trying. The company already launched the VR environment Horizon Worlds – either the first step into the metaversal future or Second Life 2.0, depending on who you ask — in Canada and the U.S.

“Why oh why didn’t I take the blue pill?”

If Mark Zuckerberg doesn’t build it then other companies — like Microsoft or Google — definitely will. The metaverse is coming, whether we like it or not. In fact, it could be here by 2026.

Last month, the city of Seoul pledged $33 million to a project called “Metaverse Seoul.” This five-year plan, according to XR Today, “will transform Seoul’s public services by allowing employees to communicate to members of the public via an official Metaverse platform using 3D avatars and immersive environments.”

It’s important to note that no company or city has a monopoly on the metaverse, largely because it hasn’t been created yet. Right now, tech titans are desperately attempting to become the first to step into the unknown. This brings us back to The Matrix and the blurred lines between the real and the imaginary.

Of all the questions posed by The Matrix, perhaps the most interesting revolves around the red and blue pills and their relationship to the concept of truth. Neo readily accepts the red pill and the reality that comes with it, but not everyone in the human resistance agrees.

Cypher (Joe Pantoliano) is the antithesis of everything Keanu Reeves’ Chosen One hero stands for. Shortly after Neo enters the real world, Cypher says, “I know what you're thinking, 'cause right now I'm thinking the same thing. Actually, I've been thinking it ever since I got here. Why oh why didn't I take the blue pill?” Later, he agrees to betray his friends while savoring a virtual steak in the Matrix far more delicious than the gruel they slurp down in reality.

The metaphor of red and blue pills has taken on a life of its own, but it’s still synonymous with the franchise. Shortly after Facebook rebranded itself, the official Twitter handle for Matrix Resurrections tweeted an image of the pills with the caption, “Now based on real events. The choice is yours.”

“Escapism is necessary, even healthy.”

But is it? Is it possible to function in modern society without embracing tech? The answer is no, and so, some authors believe the metaverse is little more than a “big fat steaming load of billionaire nerd pabulum,” an overhyped piece of vaporware that will never come to fruition in a market where most of us prefer today’s simpler internet.

Futurist Andrew Curry is not quite as cynical. “I’m sure that the metaverse is technically possible,” he says, “and will carry on getting more technologically sophisticated.”

To Curry, the question is whether the metaverse can ever become as dominant as the modern internet or smartphones.

“That’s where my skepticism comes from,” he adds. “I can see that these technologies will be used for niche applications like virtual conferences. I’m not persuaded that they’ll become our overarching milieu.”

This isn’t to say the metaverse won't evolve into something revolutionary. It might. Web 2.0 connected us to online communities. Web 3.0, through virtual headsets and body sensors, looks to place us inside the internet. As technology becomes more immersive, and the line between what’s real and what’s not will become more blurred, it’s only a matter of time before we make that leap one way or another.

For all its faults, the Matrix is essentially an even playing field. No human gets special treatment in the simulation. Everyone seems miserable by design. But the Metaverse will likely be just as unjust as the real world we live in today.

Countless articles have been written about the “digital divide,” a term that refers to the gap between those who continue to benefit from the Digital Age and the many people who haven’t. As billions of us become more dependent on technology and spend more of our time online, we can expect that divide to grow. In the United States, the average teen spends up to nine hours a day with digital devices.

Though not officially recognized in the Diagnostic and Statistical Manual of Mental Disorders, internet addiction is a real problem with real consequences. Apps can be addictive but, compared to what the metaverse could offer, they’ll appear quaint. If addiction is a problem now, imagine the problems the metaverse, which will incorporate virtual and augmented realities, could pose. Escapism is necessary, even healthy. Losing yourself in a good book is a pleasurable experience. But losing yourself in another world for hours or days on end is a different type of escapism. What happens if that world is as engrossing as philosopher Robert Nozick’s experience machine?

Maybe all this talk of escaping into another world sounds hyperbolic, but the fundamental ingredients of the metaverse are already here. In June, a patch of virtual real estate sold for more than $900,000. A company called Metaverse Property, the so-called “world’s first virtual real estate company,” is looking to sell more. And a Metaversal festival, a four-day celebration of music and culture attended by avatars, took place this year. These are just tasters of what’s to come.

Disney recently announced plans to enter the metaverse. Nike, too. Expect many other companies to do the same. As these companies enter the unknown, everyday people may follow suit.

The academic Yuval Levin recently argued that social media has “turned large swaths of our personal lives into platforms for pseudo-celebrity performance, where we display ourselves and observe others without really connecting. And they have elevated expression over action in ways that have mangled our civic and political cultures.”

Will the metaverse accelerate these problems? If you think social media is bad now, imagine the philosophical, psychological, and even existential issues the metaverse presents.

Consider the existential questions The Matrix posed. Similar to Plato, who insisted that we have an obligation to live an authentic life and embrace reality, Neo makes it his mission to open humanity’s eyes and question our existence. Meanwhile, Cypher abhors the very nature of reality. He quite literally believes that ignorance is bliss, choosing to shove reality aside for the potential of simulated fame and fortune. When the metaverse arrives, which path will you choose?

The Dangers of The Metaverse

We’re (probably) not going to find ourselves caught in The Matrix’s bloody battle between rebels and robots, but the whole system could still come tumbling down. To function properly, the Metaverse will rely on a highly effective power grid. America’s electric grid is vulnerable to attack. What happens if millions of Americans are living their lives in the Metaverse and the power goes out?

What about threats to encryption, the core component of data privacy and security? What happens if that million-dollar piece of metaverse real estate gets stolen? The Metaverse will provide us with new opportunities for personal and financial growth, but also significant risks. Just like cryptocurrencies offer a chance at tremendous wealth or financial ruin, the Metaverse will be crypto on steroids.

“Will Mark Zuckerberg become the Master of the Metaverse?”

Who will govern this new world? What laws (if any) will apply? Mark Graham, a professor of internet geography at Oxford, tells Inverse that it’s up to us to decide those crucial questions right now.

“The metaverse is ultimately a new platform for social interactions,” he says. “If we want our future social interactions to be conducted in ways that are maximally socially beneficial rather than maximally profitable, we need to ensure that there is a meaningful degree of democratic governance on the platform.”

As huge companies race to further colonize the collective consciousness, we’re left with many questions and few answers. Will Mark Zuckerberg become the Master of the Metaverse? He should be the least of our worries. The Metaverse is coming with or without him, and the world is ill-prepared for what awaits.

When it arrives, it will be more than just fun and games. People will work, date, and shop there. Many will, in essence, live there. And if The Matrix is becoming a reality, you’ll have to decide which pill you want to take. Cypher never did get that blissful paradise he so desperately craved. But we might.

Then again, there’s the finest of lines between utopian dreams and dangerous delusions.

The Matrix Resurrections premieres December 22 on HBO Max and in theaters.