"It's all about reliving cycles of torment over and over again." 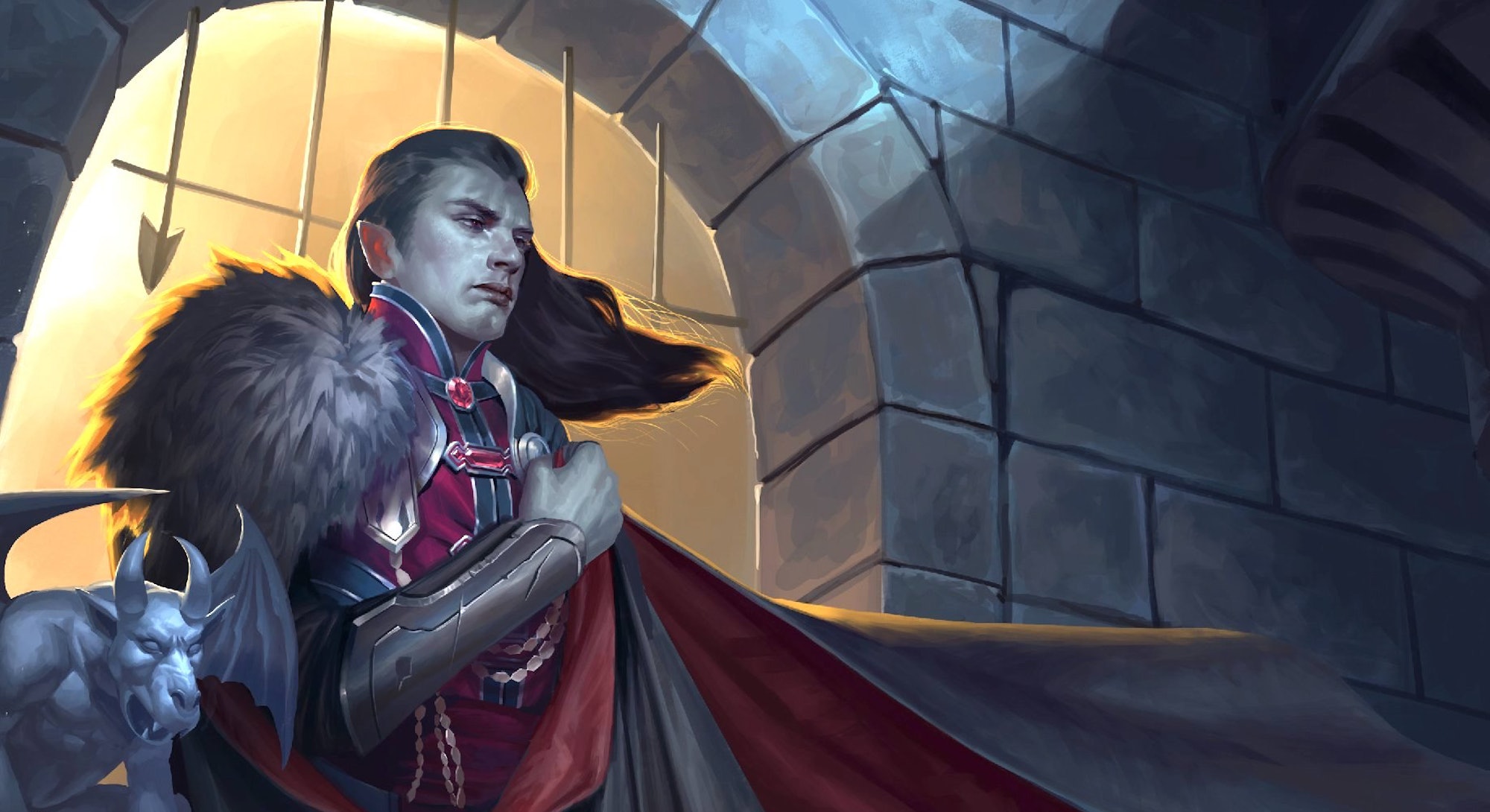 One of the best and most popular Dungeons & Dragons adventures in the last decade, Curse of Strahd, is about to get a sequel — and so much more.

The upcoming Van Richten’s Guide to Ravenloft, due out May 18 from Wizards of the Coast, will return to Barovia for more stories about the vampire Darklord Strahd, but its loftier focus is on expanding D&D's most terrifying campaign setting to include many types of horror beyond the Gothic. The book riffs on more subgenres like zombie apocalypse, slasher horror, Frankenstein, cosmic terrors, urban legends, and even ... battle royales.

"How do you get out of this Domain when you are being hunted, not just by a powerful Darklord who has packs of Displacer Beasts, but the entire Domain is a deadly rainforest?" Lead Designer Wes Schneider said during a press preview for Van Richten’s Guide to Ravenloft. In the violent forests of Kalakeri, players will have to scavenge for supplies and fight for their lives like it's Fortnite or Call of Duty: Warzone during Halloween season.

Anyone familiar with Strahd's kingdom of Barovia may know it is one of many Domains of Dread within Ravenloft, which itself is a Demiplane of Dread hidden within the Shadowfell plane by an ominous mist. (Yes, these vibes are very similar to Dark Souls video games.) But Van Richten’s Guide to Ravenloft will smash the door to Ravenloft wide open, allowing players to venture forth and explore 30 new Domains featured in the book, each with a unique kind of horror.

Why does everybody love Curse of Strahd and Ravenloft?

Released in 2016, Curse of Strahd stands apart from most 5th Edition adventures because of its roots in Gothic horror. It's set within Ravenloft rather than the Forgotten Realms, where the vast majority of D&D books take place. In short, it's closer Dark Souls than it is The Lord of the Rings by focusing less on high fantasy and more on death, darkness, and monsters.

The titular Strahd is a vampire Darklord trapped within Barovia, a Domain within Ravenloft, where he seeks the human reincarnation of his beloved Tatyana generation after generation. Inspired directly by the more romantic aspects of Dracula, Strahd's story is as much about heartbreak and anguish as it is violence. The sourcebook includes interesting alterations to magic and unique character options that lean into the spooky atmosphere. The whole thing feels gripping and dangerous in a way that few D&D adventures capture.

At some tables, you're bound to see a lot more violence, madness, and gore than your typical game. Some groups may simply crave a more frightening experience at their table, but that isn't the case for everyone who might play Curse of Strahd or Van Richten's Guide to Ravenloft.

“Horror doesn't need to mean an R-rated movie!" Schneider says. "You do not need to bring your parents with you to this D&D experience. Horror can be Scooby Doo or Ghostbusters. Adventure, mystery, suspense — not gory and visceral." Among many other things, this new book will teach DMs how to move in either direction to suit the group's preferences.

What is Van Richten’s Guide to Ravenloft?

The 256-page Van Richten’s Guide to Ravenloft is presented as correspondence between D&D's Van Helsing equivalent, vampire hunter Rudolph Van Richten, and other heroes in Ravenloft like Ezmerelda d’Avenir and the Weathermay-Foxgrove Twins. It's therefore closer to a campaign setting book like Eberron: Rising From the Last War mixed with the first-person flavor of Tasha's Cauldron of Everything than it is a narrative-focused book like Descent Into Avernus. But there's still a 20-page adventure called The House of Lament that weaves together many different Domains like a whirlwind tour of horror.

Game Designer Amanda Hamon, who worked on the Barovia section of the book, promises that Van Richten’s Guide to Ravenloft provides a "direct throughline" from Curse of Strahd, but the main draw here is a fully fleshed-out resource for those 30 new Domains of Dread, each with its own supervillain to match Strahd.

"Some of the Domains of Dread might feel eerily familiar to fans such as Lamordia, which explores the horror of experimentation on creating undead beings from deceased body parts by Dr. Viktra Mordenheim," an official release from publisher Wizards of the Coast reads. "Other horrors include the surreal, fairytale masquerades of Dementlieu; treachery in the war-torn rain forests of Kalakeri; and the endless zombie hordes of Falkovnia."

Schneider describes Dementlieu as being trapped in an "endless masquerade" with a "ghostly Red Death meets Cinderella" vibe in what we might call a macabre fairy tale. “If every Domain is a horror funhouse, Lamordia is the Frankenstein country with mad scientists, flesh golems, and horrible science gone wrong against a hostile snowy background,” Schneider also promises.

"What happens when there are more zombies than fireballs?" he says of Falkovnia, "How does that impact a society?" Vlad Drakov, a ruthless mercenary resembling the real-life Vlad the Impaler that most Dracula myths are based on, is Falkovnia's Darklord. "He may be the Domain's last hope to survive against the overwhelming hordes!" Schneider says. In another Domain rooted in Indian folklore, rival forces are at war for control. And we see all manner of undead in other Domains as well, including mummies.

There's an entire chapter that defines how Domains of Dread and their Darklords function, along with ways to create custom versions of each. It breaks down different types of horror so that Dungeon Master's can craft their own "bespoke nightmare."

Among many helpful resources for establishing the tone is a mechanic called Dark Gifts. "Players can create more terrifying characters with Dark Gifts that provide roleplaying ties to the Domains of Dread by bestowing benefits that may have a deadly cost," an official release reads. The mechanic seems familiar to Eberron's Dragonmarks, except rather than a magical tattoo that bestows minor magical benefits, a Dark Gift will augment a character's background and connect them to a specific Domain in a way that offers mechanical benefits while infusing them with an extra touch of horror.

Van Richten’s Guide to Ravenloft also expands some of game-changing Lineage rules presented in Tasha's Cauldron of Everything that expand the potential Races and Backgrounds that players can give their characters. The "Gothic Lineages" presented in a late-January Unearthed Arcana appear in the book, offering Dhampir (half-vampire, half-human), Hexblood (descended from a hag), and Reborn (a person brought back from the dead) as playable options.

Similarly, the College of the Spirits subclass for Bards and Undead Pact subclass for Warlocks — both of which appeared in an August 2020 Unearthed Arcana — appear in the book, allowing for both classes to lean into dark necromancy more than ever before.

Whether players are looking for a direct sequel to Curse of Strahd, a playable D&D zombie apocalypse, or tabletop battle royale, Van Richten's Guide to Ravenloft has a nightmare for every horror-inclined player at your table.