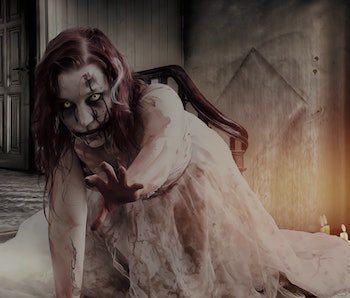 Zombie films often end with a miracle cure or the arrival of the army (or the protagonists and the world facing uncertain doom). But what would happen if a new disease started converting humans into a zombie-like state for real, and how might we actually stop it? Answering this kind of question isn’t just a fun exercise — it can tell us a lot about how a genuine highly infectious condition might spread.

Scientists who study disease — epidemiologists — need to answer questions such as how a disease spreads, how fast it is likely to move through a population and, most importantly, how best to stop the outbreak and prevent future events.

Imagine if a new “zombieism” disease broke out that spread through the commonly portrayed method of infected saliva that enters a person’s bloodstream after being bitten by a zombie. This kind of direct contact spread would normally be quite an inefficient method for disease transmission compared to airborne infections, which can be spread much more easily. But zombieism is interesting because, like rabies, its symptoms can include anxiety, agitation, paranoia, and terror that alter the behavior of the infected individual. So zombies will actively try to bite or eat their victims, thereby spreading the disease faster.

The original source of the zombie outbreak is rarely a concern in horror films, whereas epidemiologists spend a lot of time using analysis and models to track back to the first case(s) of disease. For example, a biological agent released into the air or contaminated food consumed at a large social event might cause a large number of infected individuals at one time. A laboratory accident, on the other hand, might initially affect a reasonably small, possibly contained number of individuals, in a small area. These parameters, as well as the mode of transmission, will affect the disease’s spread.

Armed with an understanding of the transmission method, we can consider how fast the disease could move through a population. For any epidemic, epidemiologists will try to calculate a basic reproduction ratio that describes the average number of additional cases an infected individual will generate. This number (often referred to as R₀) describes how severe an outbreak is. One with an R₀ of less than 1 will eventually die out, but greater than 1 will spread through a population.

Our zombies do not expire naturally and require the removal of their head or destruction of their brain for permanent death. So the main consideration in a zombie epidemiology model is how many people a zombie can bite before it either runs out of victims or is destroyed. This is a function of many other variables including population density and people’s ability to destroy zombies. The zombies might be the slow shambling monsters of tradition, or perhaps the faster, more deadly infected humans portrayed in the film 28 Days Later.

If we assume that the zombies hunt naively, then population density is one of the most important considerations. A heavily populated area provides plenty of opportunities for any given zombie to feed, and infected cases will increase rapidly. Isolated zombies, however, would have a tendency to shuffle around, causing no real harm.

Finally, having established how our disease is spread and how fast it could bring about the end times (or not, as the case may be), we need to identify the best method for reducing our R₀ below 1. This will ensure the infection does not lead to a zombie apocalypse.

There are typically four response strategies to zombieism, each with a grounding in an epidemiological study. An obvious strategy is to quarantine the infected individuals, possibly with the hope of developing a cure or vaccine. While this can be successful, the process of developing a cure is lengthy and difficult, and maintaining a perfect quarantine is difficult and risky. In cases with a high R₀, as is typical of zombie epidemics, even one infected individual that breeches quarantine or is not captured risks annihilating the host species.

A strategy often seen in zombie stories is for the uninfected to hide away, essentially isolating those who are healthy from those who are infected. This is typically employed when the infected individuals vastly outnumber the healthy. This protection could be seen as some sort of immunization, but success relies on a continued ability to remain apart. Once the infected hordes have breached your protected zone, you have already created a perfect environment for the disease to spread rapidly in a small space.

With no treatment option, a selective cull that involves attempting to remove the infected individuals from the population permanently is a tempting option. But this suffers from the same problems as quarantine. Not only does it require efficient removal of the infected, there also needs to be some diagnostic screening process in hand so that early cases with fewer symptoms can be detected.

This leaves the scariest of the options: eradicate the infected area with a pre-emptive cull, with little to no concern for who, or what, is destroyed in the process. With heavy casualties but a guaranteed end to the infection, this is often the choice the “military” characters plump for in a zombie story. Assuming you could successfully eradicate all of the infected individuals, this might appear the best option. But moral issues remain regarding the heavy losses of uninfected individuals that would also take place.

Real diseases are rarely as powerful as those in zombie films, which usually have a 100-percent transmission rate and come with a near complete lack of immunity, recovery, or treatment. But exploring fictitious zombie-like pandemics also offers an exciting way to discuss infectious disease transmission, prevention, and treatment. So next time you sit down to watch your favorite zombie film or TV show, put yourself in the shoes of the world’s epidemiologists: What would you do, and why?

This article was originally published on The Conversation by Joanna Verran and Matthew Crossley. Read the original article here.